Japan relief at the Venue, once again! 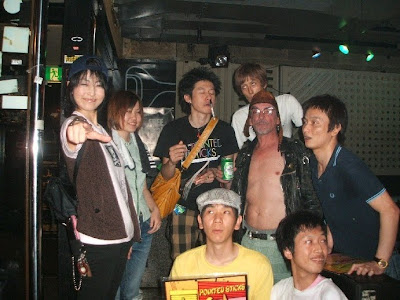 Tony Bardach with his Japanese fans in Kyoto, photo by Fumi Shutoh

Don't think, just because our fickle media has moved on, that there is no further need for Japan aid - there are still displaced evacuees, a vast area in need of rebuilding, and though there's next-to-no coverage, there's still radioactive water leaking from affected reactors, and much work to be done, according to TEPCO press releases. Pointed Sticks' bassist Tony Bardach reports that people have commented about Thursday's benefit show at the Venue, "isn't that kind of long since the event," but - he continues, "as anyone could quickly figure, this 'event' continues to hurt Japan and her peeps." The Pointed Sticks have many friends in Tokyo, some of whom are from the northern Kanto region that was worst hit by the quakes/tsunami; Japanese interest in the band was a decisive factor in convincing the band to reunite a few years ago (my article on that can be viewed online here); they've toured there again, since! The rest of the lineup (White Lung, The Trespassers, the Jolts, the Bonitos, and SNFU) is pretty killer, too - it's not every day you get to see this many local bands playin' at the Venue! 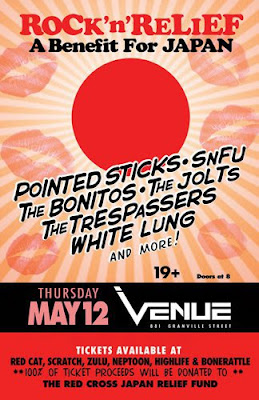