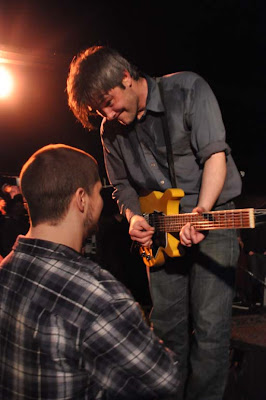 Ford Pier by Femke van Delft, not to be reused without permission

So I declared myself on petulant (temporary?) strike re: writing about Nomeansno awhile back. My saying that was not entirely serious - it wasn't even something I had planned to make public, except that I'd had this dream that (Nomeansno drummer) John Wright was in, and felt the need to write it out; and how can you write about a dream without explaining the context it may have emerged from? I'm still a fan and so forth - I just kinda get the feeling that the brothers Wright don't really care about press (or maybe they just find me irritating; it's not outside the realm of possibility!). 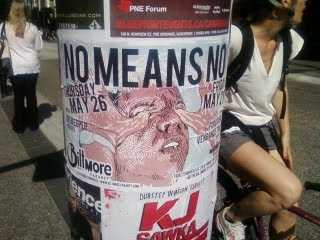 All of which is fine, they don't need me to be a great band. I'll be seeing them on Thursday, and am still vacillating about whether to go on Friday or not, assuming tickets are still available. I have tentative other plans for that day, but I'm suddenly really keen to see the Ford Pier Vengeance Trio (his official site is here), having just caught them in front of Mike Watt. They only open for the band on the Friday show... I've seen Ford a bunch of times in the past, without him ever being the main reason I was at the show, without knowing a single song he was singing (unless it was a Show Business Giants tune, which is a bit different - that band is mostly Tom Holliston's, these days, with Ford, if I recall, singing and writing the odd song). I mean no slight against him - but as it happens I doubt there is any other artist I have had quite so much exposure to without actually having sought it out.

The laundry list: I've seen Ford Pier perform twice in Ontario, in Waterloo and Hamilton, I believe, in front of NMN; I had no idea who he was, at that point, and barely paid attention, as sometimes one does with opening acts - I was more concerned with drinking, socializing and scribbling notes on the Jandek show I'd seen that same week. Then I saw Ford join Nomeansno on stage in Toronto to sing the Show Business Giants' "Sugartown" for the sake of the smattering of people who were in-the-know enough to appreciate what was going down; there were doubtlessly several Nomeansno fans in the audience who were utterly non-plussed - "who is this dude onstage? This ain't a Nomeansno song!" I barely knew what was going on myself, but was impressed by Pier's enthusiam. It made me more curious, as did plunging shortly thereafter into the music of the Show Business Giants, even seeing him onstage with that band. After that, I caught Ford again onstage with Daniel Johnson at Richards on Richards, where he did a rather introspective and abstracted opening set; it had been over a year since I had seen him, at that point, and his music was so different from my past associations with him that I didn't recognize him, to my embarrassment. I figured that out at Red Cat Records, where I actually spoke to him for the first time, shortly thereafter; I've spoken to him there on numerous occasions, sometimes very productively (he recently recommend an uber-cool anthology Indonesian psych-funk to me, and boy was he right about how good it is). 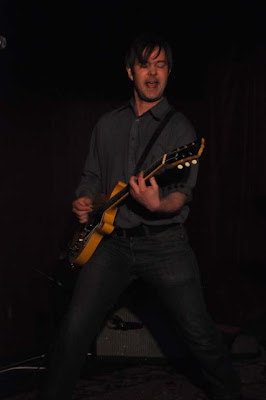 Ford Pier by Femke van Delft, not to be reused without permission

It was only after all of that, within the last few months, that steel pan player Judith Scott of the now, I believe, defunct Sister DJ's Radio Band (who have a new 7" out, if you can track it down!) introduced me to a really funny, warm, sharply observed song of Ford's about a couple who fall in love at a bingo hall - certainly the first song of his that really caught my attention (I forget the name but am told - by Ford - that it's on Meconium; it's kinda up there with Stompin' Tom's "Sudbury Saturday Night" as a slice of smalltown Canadian life). It was memorable enough that, when I found DOA's The Black Spot in a dollar bin, I bent an ear with some curiosity to hear the song - or was it songs? - that he sings on that album (It was an interesting listen, overall, though it's, without faulting anyone, a good contender for the weakest DOA album of all time; it has a rather ironic title, considering. John Wright drums, filling in for their previous drummer, Ken Jensen, who had died in a fire). It has gotten so that, having had so many experiences of Ford without having ever really done anything to follow up on them (ie., buy and listen to one of his CDs), that I have been starting to feel a little sheepish, shopping at Red Cat. Like at some point, I knew: I was going to have to actually put my mind to this Ford Pier and his music, because he is clearly an interesting & significant dude. 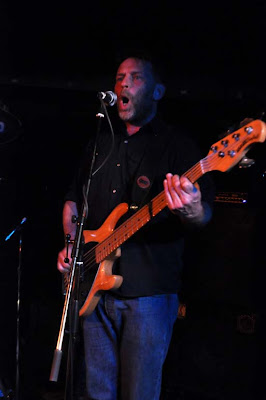 Eric Napier with the FPVT, by Femke van Delft, not to be reused without permission

That time is apparently now. I caught the Ford Pier Vengeance Trio when they opened for Mike Watt a couple of weeks ago, and Ford and his bandmates (Brad Lambert and Eric Napier, who are also in Slowpoke and the Smoke, whom I wrote about here) were so tight, sharp, smart, and jaggedly, engagingly energetic that they caught me well off guard. I was thinking at times of Rush, because of occasionally unpredictable, proggy song-structures, or - as Ford leapt and bounced and twisted and put his back into his playing - of a certain stripe of muscular, distinctly Canadian rock of yore (Max Webster, anyone?). Then the Sorrow and the Pity's Dave R. Bastard - an insidiously bright dude - mentioned being reminded by Ford of "everything he liked about The Who," which completely replaced my own perceptions; suddenly, in my mind, Ford became Canada's answer to Pete Townshend, minus the self-indulgence and the jumpsuit. (Does Ford even have a Ford jumpsuit? He should). The songs were eccentric and original enough that, while teetering on the verge of a kind of classic rock, they were somewhat challenging to follow, not always doing the predictable rock thing; played so passionately, precisely and powerfully, with me on full focused attention (mandating myself to finally PAY ATTENTION TO FORD PIER), I was kind of quietly blown away. Ah, so I have been missing something! I see... Ford's set was, in fact, vastly more entertaining than watching Watt relentlessly jog through his new opera nonstop (tho' nowhere near as cool as the Double Nickels encore or the sheer energy from Watt and band towards the end of the set; I can't get too carried away, here). I'm really keen to hear recordings by the Ford Pier Vengeance Trio, when they happen - if they capture what I saw at that Watt show, their album is going to be a Canadian classic. 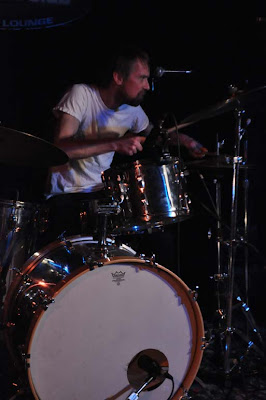 Brad Lambert, by Femke van Delft, not to be reused without permission

Maybe I'll check out Friday, after all... I might actually recognize some of the songs from the Watt show (& it won't be the first time I've seen Nomeansno two nights in a row!). 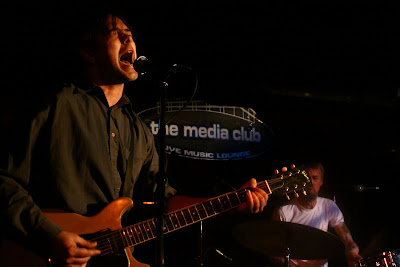 Ford Pier by Bev Davies, not to be reused without permission