THE CODE RED RELEASE OF RITUALS! - a DVD review 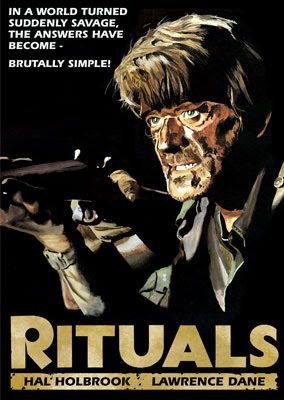 A bit of the backstory here. It's a much-anticipated DVD release, originally slated for... a long fucking time ago, which was delayed so long and with so many rumours about the death of the company supposedly distributing it that ultimately everyone who cared thought it was never going to happen.

Guess what, folks? I just watched it tonight. On DVD. From Code Red. It's real, it's out there, it's apparently been available since April 19th, and there may be stores stocking it in Vancouver (tho' I snagged the last one on the shelf at Videomatica, fwiw, so phone 'em to see if it's been restocked before rushing down). I've written about the film many times before - here, or here, here, or here, say. I won't try to do that again now, save to say that it's an essential Canadian genre picture, a really good horror movie, a really good "ordeal" movie, and has an archetypally rich elegance to its structure that will give smart cinephiles much to chew on; it's a significant contribution to the urban/rural horror genre and an entertaining bit of storytelling, to boot. Buy it, stream it, or steal it, do whatever you do, but if you care about Canadian cinema, you should see it, period - and beware of inferior, shortened versions that might be out there; the Code Red DVD is BY FAR the best version of this film you will find ANYWHERE. Do not judge this film until you have seen the full version of it - those chopped-up ones are pretty damn bad.

That said, I gotta admit, after so much time and hope and countless futile periodic peeks at the Code Red website hoping to read of new developments - this is a somewhat disappointing presentation of the film. It's entirely welcome, in that it actually fucking happened, which is better than it not fucking happening; I am grateful to have it, and sure it took much labour to make it happen - probably more than I will ever know. But while I have no idea what took so long to get this released, I know what DIDN'T take so long: the restoration (if indeed any took place). It's sourced from a scratched, somewhat pinked, somewhat faded print; that it is Lawrence Dane's own "archival" print doesn't mean it isn't well-used, since the damage is DEFINITELY noticeable, especially given that one isn't used to seeing abundant scratches on films that have been prepared for DVD. There are also no subtitles (and I don't mean non-removable German ones, like on my other DVD; I mean the optional English kind, that might enable you to catch a line of dialogue - during Marty's drunken, floating rant, for instance - that is otherwise inaudible). Maybe that's all standard stuff for Code Red releases, I don't know - but I kinda had hoped for a significant step up from my German DVD, which this isn't (save for the absence of those burned-in subs). And those rumours that the delay was due to Code Red getting a commentary from or interview with Hal Holbrook? They were just rumours, there's just Dane and Gammell being interviewed, and Dane commenting, that's it. Haven't checked those out yet, am sure they're fun, didn't really need Hal anyhow, but I'm sure some folks will be disappointed.

On the other hand, like I said, IT EXISTS, praise Jesus. And the dark-as-hell cabin stuff at the end of the film DOES look better than I've ever seen it before, the audio is good, and it's definitely the whole film - there were a few brief bits of dialogue that I don't recall having seen previously, but probably have. There are no major additions to the presumably complete versions I've seen before, but there are no subtractions, either, which is what counts. And, um, it has a cool cover. Good enough for me.

Now all I need is for Jack Layton to win tomorrow's election, and my sense of reality will be totally shot.

EDITED TO ADD: another review here: http://www.brutalashell.com/2011/04/code-red-dvd-review-rituals/
Posted by Allan MacInnis at 1:06 AM