The New Ford Pier is here! 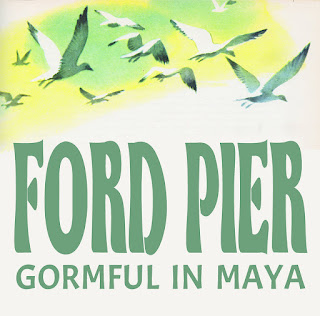 After that stunning opening set for Bob Mould a few years ago - about which I had interviewed Ford Pier at length - I approached Ford and asked him, enthusiastically, "hey, what album is that bleeding-out-my-ass song on?"

I was, you see, at that point either in the midst of, or just recovering from, a very uncomfortable ordeal involving kidney stones and a stent to keep my urine flowing, which meant I was (sorry) pissing blood for months. Even though Ford's ass and my penis - let them never again be spoken of in the same sentence! - are very different orifices, the lyric to the effect of "happy days are here again/ I'm bleeding out my ass" REALLY RESONATED with me, and there was a dense, witty wordplay to the lyrics that I wanted more of.

Alas, the song was not on an album at that point, Ford explained, and then we went on to marvel at how attentive the audience had been, which was not the norm for solo opening slots of his I had seen, or indeed, most opening acts for most shows I've been to in Vancouver. But to come back to the bleeding-out-my-ass song, again, I wish I had been prepared when Ford opened for Eugene Chadbourne last month at Pat's Pub to record the song, which it turns out Ford has titled, "Ponce De Leon Vs. the Risible Shuck of Authenticity." I did not record it. I did record "Make It Look Like an Accident," also on the new album, but I don't love it as much as I love "Ponce De Leon Vs. the Risible Shuck of Authenticity," the title of which I hope to write enough times in this blogpiece that it supplants "the-bleeding-out-my-ass-song" as the way I think of it.

I have no idea what "Ponce De Leon Vs. the Risible Shuck of Authenticity" actually means, since I haven't read about Ponce De Leon in decades and have forgotten who he is. I do get the joke behind the title "Gormful in Maya," mind you, with the small qualification that before receiving Ford's pres release this morning, I had always thought "gormless" meant "lacking testicles." It is more like "befuddled, lacking sense." So it's about having being smart in the realm of illusion, not about having big balls.

I am going to totally download this album as soon as I get paid, to thank Ford for putting it out online, though note: he has made it available for free if you prefer it that way. He writes:

There were arrangements underway for a release like any other on the eve of another European jaunt, but Mother Nature had different plans. None of us today are living the lives we'd prepared ourselves for six months ago, and if records are living things, as I believe they are in many significant ways, then why should we expect that they should? So I've decided to offer the record for free/PWYW on Bandcamp. It's my hope that it will become a welcome part of everyone's sequestration! Future fond memories of a difficult time? Surely I delude myself! A coping mechanism, then. Gormful In Maya. Please enjoy.


I am no longer bleeding out my penis (and hope Ford never was bleeding out his ass), but I still love this song, and am looking forward to Friday, when I can PWIW to download it. Thanks for putting this out, Ford! Check this out, folks!
Posted by Allan MacInnis at 7:44 PM

That is the fucking best song that I've heard in ages!