Doug & the Slugs: keeping it alive 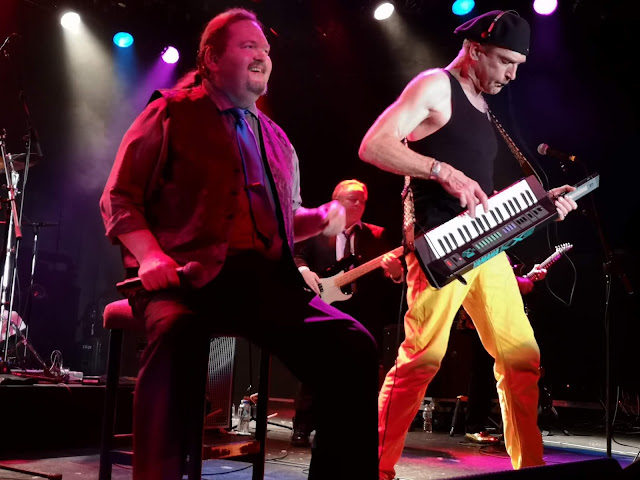 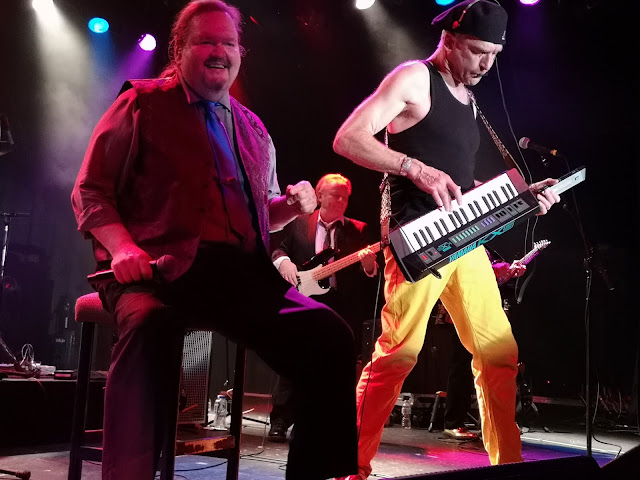 Just for the record: Doug & the Slugs cooked last night. Ted Okos was utterly marvelous as a frontman. He was cheerful, expressive, professional, and witty, and had a pretty entertaining sense of physical comedy to go along with his vocals: my favourite moment was when the Slugs were doing  "Embarrassed" and he pantomimed trying to cover himself up as he sang "though I may be naked I just don't feel foolish," which was really cute and endearing. And his voice really is uncannily close to Doug's - not 100% the same (it's just slightly higher and smoother, not really featuring that much of what I described in the interview as Doug's "gravel croon;" there's a little gravel there, but much, uh, finely ground, if you follow me). He kept close to a stool, since he was having some back issues, but he managed to be an extremely watchable and engaging frontman throughout - which was really odd, in a way, because even though he was the one guy up there who WASN'T on Cognac & Bologna or Wrap It! or so forth, you really did want to watch Okos during the songs. Whatever silliness Simon Kendall got up to, as he clowned around onstage with his keytar; however snazzily Richard Baker was dressed (in a gold jacket and funky shoes and a sequined Slug brooch made for him by his wife); however cool it was that this was the original band doing their thing (which they did with much more conviction than that lineup at the Viper Room that I mentioned in the article; those guys weren't bad, in fact, but they just weren't on this level)... it was Okos that sold it. Man deserves some sorta medal for being able to do that, for taking on the mantle of someone else's material and not only doing it well, but doing it so that he holds your attention as a performer in his own right. And for persistent naysayers - the "no Doug no Slugs" camp, you've really gotta:

a) check it out for yourself, if you haven't, whereupon you will admit that Okos does a great job (the only thing that I didn't like, he changed "in the midst of it all" to "at the end of it all" for "To Be Laughing." I have attachments to every quirky turn of Bennett's phrasing on those first two albums, where the wit of his lyrics is over half the draw. But that was ONE LINE. The only other change I notice that he made, replacing "RCMP" with "NDP" in "Drifting Away," was actually pretty funny and relevant!).

b) acknowledge that there is no one else bringing attention to Doug & the Slugs at the moment. These guys are keeping CDs in print (they had Slugcology 101 and Cognac & Bologna at the merch table). They're keeping Doug Bennett's legacy ALIVE, which also means they're keeping monies flowing, by whatever exact mechanisms are at work, to Doug's family, and keeping it possible that there might be some future release of live or otherwise previously-unreleased music (which I am told there is quite a bit of!). Without these live shows, you'd still hear the odd later Slugs song on soft rock radio, but goofy bits of brilliance like "Wrong Kind of Right" (which they played last night!) would fade in the public eye. While the other Slugs are still around, it's terrific that they're keeping this music fresh and real for new listeners and old fans. It is not Doug Bennett up there, but it WAS his songs that were being sung and enjoyed and danced to. How can that be bad?

The one annoyance last night had nothing to do with the band, but ended up having a kind of surprisingly happy resolution. At one point, I was right at the front of the stage, and a guy said "I just want to get my beer." There were a couple of cans on the stage, so I let him past me (despite picking one up and seeing it was empty) and he USURPED my spot. This dude a) stank, with long greasy unwashed hair and what might have been an undercurrent of alcohol and tobacco); b) was either a bad enough actor or a desperate enough drunk that he kept taking pulls on the cans in front of him, one of which, I had confirmed, was fucking empty; c) sang along loudly right next to me through a couple of songs, despite not having much of a singing voice; and finally, was d) repeatedly sticking a camera out in front of him, like it was somehow important that (despite numerous professionals present) he personally get as many shots as possible of the band. The pros had already taken their cameras away, observing the usual three-song limit for photographers, but this guy just carried on. I mean, I can understand whipping off a few pics with your cellphone, say if you want to blog about the band or post something on social media - it's impossible to resist - but for this guy, who probably doesn't even have a Facebook account, to  be waving his big bulky camera around through several songs, like it somehow would profit anyone other than himself if he took 100 photos of the show... ergh. It was one reason I ended up focused on Okos, so much, actually, because I was trying to block the stinky drunk camera guy from my view. He had called altogether too much attention to himself, and I was resenting how distracting he'd been, and my resentments were taking away from the fun I would otherwise have been happening...

...when something kinda weird happened: the band played one of those lost and forgotten Doug & the Slugs songs from 41 years ago, "When the Heat Takes My Faith."  This is a song that most people have never heard before. It's on that Rohan's tape on Youtube, but it was never officially recorded, and, being written before the band had actual albums out there to play songs from, was likely dropped from Doug & the Slugs sets in favour of their recorded material maybe in the early 1980's. It was fun tune - Kendall poked fun at its reggae stylings by describing it as a "WASPafarian" song - but pretty much fresh to me. But the old, stinky, distracting drunk beside me?

He knew the song, apparently. He must have seen the band back in the 1970's. I kind of forgave him everything when I realized that he was singing along.

Glad you had a fun time, stinky drunk guy. So did I, and so did my wife, and so did a maybe-not-quite-sold-out-but-still-pretty-damn-packed Commodore. Thanks, guys, for having done this! I can now remember seeing Doug without any real Slugs, and the Slugs without Doug, and try to jigsaw-puzzle the two experiences together in the band so that it almost feels like I saw the band in their glories. To say nothing against Doug - a man of style, wit, and greatness - last night kinda put the Viper Room show to shame.

Oh, hey, Simon: you mentioned that you had never asked Ted if he'd seen the original band? He did, but not the "real," full band - he opened for one of the later incarnations, back in the 1990's - I think he said something about Tales from Terminal City, so you and Steve might have been in there...
Posted by Allan MacInnis at 12:35 PM

Great recap of your experience last night! Wife of the goof on stage!