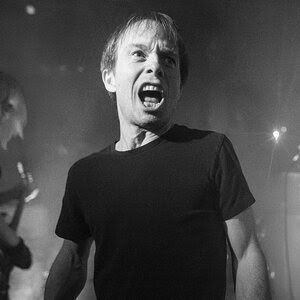 Sunday Morning's new album, Consequence of Love (Side 2), kicks off with a rather dark rocker called "The War Came to Us," which, with repeated warnings that there "ain't much time," seems to fit the apocalyptic, threatened mood of our current world—even though it appears overtly to be about a couple running out of dope in an Arizona motel. But underneath what frontman Bruce Wilson describes as "an obvious drug vibe," thematically, "it’s about a relationship that seems impossible to leave despite how unhealthy it is. I wanted to capture that feeling of being trapped, the claustrophobia of that situation. The line 'We have the rest of our lives—it ain’t much time' speaks to thinking we have all the time in the world to change when in reality that’s just not the case."

Wilson doesn't see it as "particularly apocalyptic," however: "more of basic realization that our time is limited. Fully admitting to my mortality has benefited me greatly. My imminent and unavoidable death is what drives me to make necessary changes in my life and provides me with focus on a daily basis."

Certainly, since the eponymous Sunday Morning debut LP came out in 2017, Wilson has not been wasting time. Besides several Sunday Morning shows—including a highly memorable one I caught at the SBC Cabaret, organized by Billy Hopeless, whom Wilson describes as "incredibly supportive" and possessed of an "enormous heart"— he's been seen ripping into a Dead Boys at a recent Black Halos reunion show; he joined Tom Anselmi of Slow for lead vocals on "He Ain't Heavy, He's My Brother," during Slow's 10-night-stand at the Penthouse; and he's done a few guest appearances with GRRL, a band put together by R.d. Cane, who has directed many of Sunday Morning's videos, like "Come the Rain," "Sick in the City," "1986" and the lead single off the new album, "Breathe." Playing live with GRRL is "always beautiful kinetic chaos," Wilson says.

Alas, there is one collaborator who will not be with him this time out - Stephen Hamm, Wilson's former bandmate in Tankhog. Hamm "left the project last summer when he decided to focus his attention into his amazing solo project Theremin Man. I’m in awe of what that man can do with such an esoteric instrument. He’s making music that’s both completely original and captivating. I love it!"

Hamm was, however, involved in the recording of Consequence of Love (Side 2). "I started writing the new album with Felix [Fung] out at Little Red Sounds Studio last winter and Hamm came out to join us in the process. He stayed with us through the first part of the recording process and added a tremendous amount of creative talent during that period." Wilson is confident the two will collaborate again in the future: "We support each other fully," he says.

While I can appreciate Wilson's love of Scott Walker, Leonard Cohen, and Nick Cave - three influences we discuss at length in a past interview, who do come through on many of his songs - I tend to be immediately drawn to his rockers. "I'm in Love" has the swagger of vintage Aerosmith, though their later output has tainted their legacy a bit, and I'm shy to ask Wilson if he's a fan.

I needn't be. "I fucking love Aerosmith!" he exclaims. "Rocks and Toys In The Attic will always be two of my favorite albums. The song 'Rats In The Cellar' is as punk as it gets." But Wilson's own take on the song is that it has "an Alice Cooper vibe—like if he was drinking cough syrup with Rowland S Howard in a Melbourne squat."

Saturday's show at the Rickshaw will feature two noted opening acts, Hunting and Jody Glenham. "I have immense respect for both those artists. The new Hunting album is phenomenal and Jody Glenham is a tremendous talent who works harder than anyone else in this city. It’s going to be great to play live with our new line up too. We recently added Kyle Schick (he most recently played with Dead Soft) on guitar and keyboards and he’s fit into the groove perfectly. We’ve found a sweet spot between order and chaos/ darkness and light that is vital and exhilarating. It’s not often that something like this comes along and I’m very excited to see where this goes."

As Mike Usinger discusses with Wilson in a recent Straight piece, the album is only half of a planned project; Mike writes that "a story-completing Side 1 will be released in the future." Why start with side 2, however? "Good question and my only answer is that we could only afford to record these songs and it just felt like Side 2."

Speaking of the apocalypse, however - with LiveNation and Timbre pulling the plug on concerts left and right, and shows south of the border by artists like Patti Smith getting cancelled or postponed in the name of "social distancing," does Wilson have any thoughts on COVID-19?

"It's irrelevant to the album but it may not be irrelevant to attendance at the show," he says, but adds that he tries "not to panic about anything... In the grand scheme of things I have little importance (if any), so self-centered fear is a useless expense of energy that could be used for something else much more productive. I don’t see how hoarding food or toiletries is of service to anyone. Obviously this virus needs to be treated seriously and. in regards to the show, anyone who is feeling sick or who has a compromised immune system should stay home. Being sensible and pragmatic through this is paramount."

It doesn't stop him from being excited about the show, or the band. "For the foreseeable future, I’m planning on directing all my time and energy into Sunday Morning. We’re coming together in an incredibly powerful way. It seems like the festivals and shows we had lined up for the summer are going to be cancelled, so we’ll probably spend the time hunkered down in the studio writing our next album. Make the best use of this time as we can." 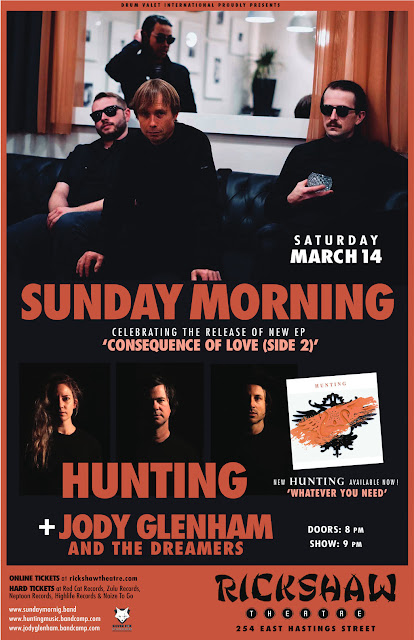 Posted by Allan MacInnis at 1:09 PM