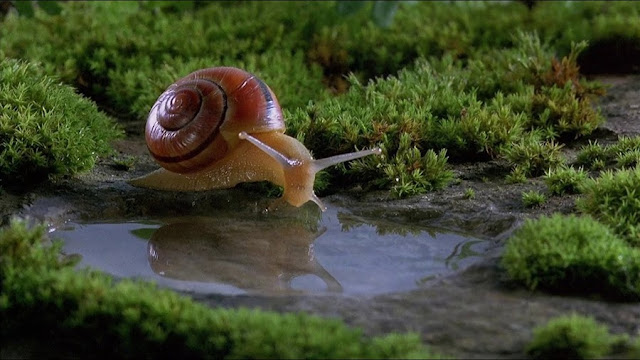 I love a good bug documentary. Before I became a diehard fan of the microphotography of Ken Middleham - who shot bugs for Bug, Phase IV, The Hellstrom Chronicle, and Damnation Alley - before I even realized how much I could enjoy a good nature documentary - I had a seriously eye-opening experience of snails, dung beetles, dragonflies, and other small-sized garden creatures, blown up to huge size, when I caught Microcosmos on screen in Vancouver in 1996. It's really pleasing that the Cinematheque has chosen it as one of two movies with family appeal to screen for Earth Day 2020 (the other, Ferngully, I have not seen and cannot comment on). It is part of a "Film Club" series designed to get kids out to theatres (with their parents, of course). The Cinematheque program promises free popcorn and a "film club" badge for those aged 13, or younger, admission for whom is a mere $6 (adults pay $10). There will be other fun stuff for kids, as well, it seems, though adults will appreciate the film just fine, too: it's a beautifully shot, entertainingly structured doc, with several scenes (snails making love, dung beetles rolling balls of dung) having attained a sort of cult status (you've probably seen them on Youtube). March 16th...

Also note, I have a hand in a screening coming up at the Cinematheque in April... more to come on that. It's another favourite of mine, vastly more relevant now than when we first started discussing the screening, but it's pretty far from Microcosmos in tone... so we'll come back to it later!
Posted by Allan MacInnis at 12:26 AM