So last night, I went out, said hi to a friend, flipped through a cool GG Allin book with him, then went down to the Roxy for a bit to see the Imperial and Paranoid Romantic, both featuring drummer Michael Nathanson, whom I interviewed here. Really fun show. Other than having wiped down the computer mouses (mice) and spacebars at public computers at work, I had done nothing different with my day, marvelling at the spreading panic about coronavirus - which my friend likened to the Cuban Missile Crisis and the days of duckin' and coverin'. I felt perfectly healthy. Panic? No: I was thinkin' about a show I planned to go to this weekend (...which it would be irresponsible for me to name, since, who knows, if people think I might be there, they might stay home in droves!) and anticipating a busy day today at work (I'm an English tutor at a school).

This morning, I woke up feeling not so healthy: typical cold-symptom stuff, but enough that it seemed irresponsible to take public transit to work and talk to a dozen or more students. I phoned in sick, and am now in a position to consider firsthand the way the health care system here will impact the spread of the disease. It's kind of like World War Z (the book, not so much the moive) without the zombies: the way each country handles the crisis will be based on their politics, their infrastructure. The US will under-diagnose themselves because of the lack of socialized medicine. Canada, meanwhile, will try to take care of absolutely everyone, so that waiting lists stretch to infinity, while supplies run thinner and thinner.

I mean, it's an interesting thing to contemplate, but it was more fun thinking about it when I didn't have the signs of a cold. I don't think I have it, but I want confirmation that this is so - I want to be tested and reassured, not because I am so worried, but so I can return to work without fear that I am spreading a relatively serious illness. Reasonable, right?

In fact, I'd rather get it early and get it over with, before the entire country turns into a panicky, disorganized, bogged-down shitshow. All I want is a test, so I can say with certainty to people that I am healthy. I don't feel so hot, but it really is far more likely that this is just another round of seasonal illness. It is being said that the antibodies created by the disease only last awhile, and do not give you permanent immunity, but, I mean, if I'm going to try to look on the bright side of things, one is less likely to get sick WITH the antibodies than without, so...

Actually, on the way out to work this morning, my wife heard me say something to this end - "I hope I do have it" - and kind of freaked out, but rest assured, folks, I'm not going out and licking transit handrails, here. It's just that if there's a good chance everyone is going to get this sickness, better to have it in the rearview than the headlights, right? (Help me out here).

Alas, my doctor's office was fully booked. They somewhat obnoxiously don't start answering their phones until well after they are open, so I had to go to the office to inquire in person, whereupon the receptionist lectured me about my not having called ahead, "because we're screening clients." I pointed out that it was not possible for me to call ahead, since they still had their "our office is now closed" message on seven minutes into being open (I had called them before coming).

They didn't seem moved by my retort.

I have since then spent about half an hour on 811 (busy, alternating between a signal and a recorded male voice telling me that I should try my call later). With that not working, I called Burnaby Hospital - because I don't relish the idea of waiting in an ER for five hours. If that's what it takes to get tested, it's almost not worth it - I mean, I might feel fine in a couple days, right?

They couldn't help me. They had no information about wait times at the ER and suggested I call the Corona Virus Hotline (yes, there is such a thing; one of the questions they ask is who gave you the number). They have a loop of muzak periodically interrupted by a female voice saying call volumes are high, but after fifteen minutes or so, I was connected to someone. I explained that I work with the public, that quite a few of my students are from China, South Korea, and Iran, and that I am concerned more about possibly spreading the virus than having it myself. I was told that I should find out if I have a fever, first and foremost: fever, cough, and difficulty breathing are the three most significant symptoms, though of course one may be asymptomatic for some time and still have the virus. Apparently if one has a fever, it can help expedite procedures like getting seen at the emergency ward; the next step, if I am confirmed as having the virus, seems to be to call the province and report it.

No one is telling me to self-isolate unless the symptoms get severe, because, again, we're operating from the assumption that this is a cold. With only a mild cough, and a few aches and pains... I start to consider my options: I mean, it's enough to keep me away from work, but I can get back to work sooner if I can confirm that I don't have this. To confirm I do or don't have this, I should know if I have a fever, but there's no thermometer here to be found, and the app store reviews for alleged "body temperature" apps suggest most or all are garbage, that don't actually take your temperature.

There's a lot of thumb work as I scroll through articles. What do you do if you think you have a cold, but can't be sure?

I decide, since I need lunch anyhow, that I should go try to acquire a thermometer. It's not exactly self-isolating behaviour but again, it's probably just a cold. I will refrain from breathing at anyone or touching things. I walk to the mall.

Guess what? Walmart is sold out of thermometers. Shoppers' Drug Mart has exactly one left: it costs $70. I am not going to spend $70 on a thermometer.

Okay. I head back home. I listen to a bit of music, then opt to go to bed. I feel barely anything is wrong with me - but that's what the first day of a cold is often like. I sleep, and soak the pillowcases with sweat, and wake up wondering, "Do I have a fever?"

Shit got real! I am now on the "mildly panicked" side of the panicked-or-not equation. I hope it doesn't get too irritating for my wife!

Meantime, the funniest thing I have seen today on Facebook, courtesy the great Bob Petterson (apparently it started out on Dangerous Minds earlier today). 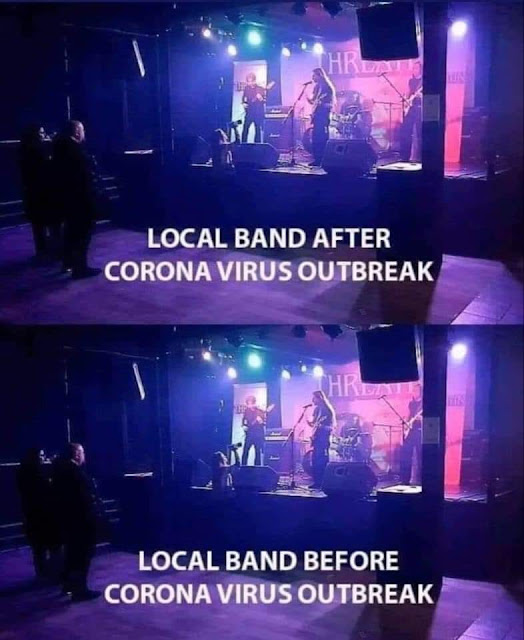 Posted by Allan MacInnis at 6:33 PM