Coronanoia 4: My Tooth and the Real World

I owe Dave Bowes a thank you. On Facebook, he corrected a misapprehension of mine that I think maybe other people share: the efforts at social distancing are NOT in aid of attempting to defeat the new virus; they're in aid of slowing exposure to it, to give the health care system a chance to catch up, so that that portion of the population that requires hospitalization and urgent care can receive it. The virus is probably with us for good now - it seems definitely to be out of the bag, unless a vaccine can be created - but if a shit ton of us get sick at once, that's going to mean some people dying needlessly, because the resources are not going to be there to help them. That's what "flattening the curve" means. Stephen Hamm, Theremin Man posted a useful video explaining this.

I had not fully understood the logic of all this until late in the game, and now that I do, things kind of make sense. The important takeaway here is that social distancing is NOT being advised because people are saying it is dangerous to be around other people right now, the end of the world, etc. There's no cause for getting all survivalist here! It's just about preventing a rapid uptick in cases of COVID-19, so that our hospitals can continue to function... it's going to hurt a lot of small businesses, but it's not the end of the world; it's just a cautionary measure, and it's kind of impressive that basically everyone except the Reverend Horton Heat is on board with it, from Disneyland to Cineplex, from Live Nation to the bars of Vancouver on St. Paddy's Day. It's been a bit confusing, and I think the world could use a bit more top-down reassurance and help with thinking things through, but there is no cause to panic.

Unless you have a root canal that needs urgent doing, and you've discovered that dentist's offices are shutting down for a few weeks, which is what happened to me this morning. I had quite a panicky run to an endodontist I don't know for a procedure that was scheduled this very morning, because my appointment for next weekend was cancelled. It's a good thing I called my dentist's office this morning and set things in motion, because even the endodontist I saw was preparing to close his offices as of tonight. He managed to do a fast and ALMOST painless root canal of an inflamed nerve, and put in a permanent filling (which probably won't require a crown). Glad my work let me take the time off to get it done. Not sure what the rest of the province is going to do about their dental needs, but...

...anyhow, I have a fixed tooth, and Erika and I have just enough groceries that we can get by for a week without much going out (tho' I think we will both still be going to work and back).

Good luck to the rest of you. Don't panic. Things will sort themselves out - a new normal will emerge. Meantime, here's Arnold Schwarzenegger, a pony, and a donkey to cheer you up. 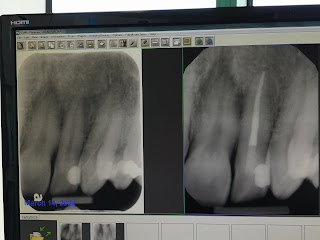 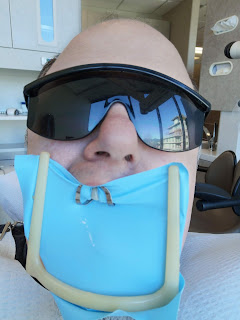 Posted by Allan MacInnis at 8:38 PM