Coco Montoya at the Rickshaw 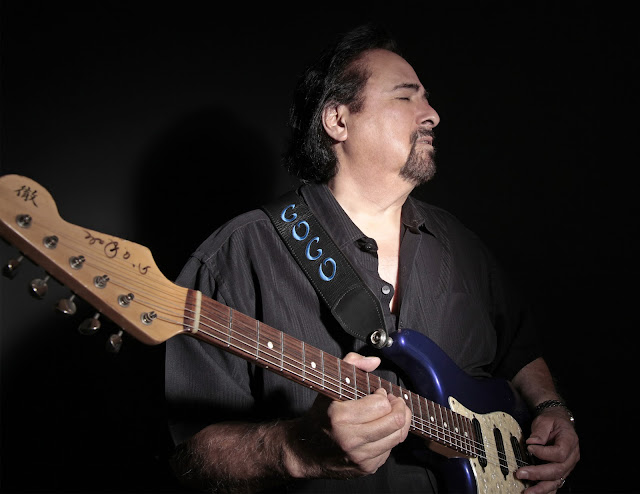 I don't really know my contemporary blues all that well. Most of the blues I listen to is the really old-time Delta stuff like Charley Patton, Skip James, Mississippi John Hurt, or Son House. I do appreciate some later blues like Howlin' Wolf and Muddy Waters, or the ragtime gospel of the Reverend Gary Davis, and I have a few Chicago blues albums in my collection but when it gets past about 1965, I don't really know what's what. I don't know Albert King from Albert Collins. I've occasionally spun albums by them, but I don't presently own any. And when you start mixing the blues with soul or R&B, which I know even less about... well, it's not exactly in my comfort zone, interviewing musicians like that.

Like Coco Montoya, for instance, in town this Sunday. I like what he does - it sounds like it would be really fun to dance to, lively and upbeat and expressive. I am more into that other branch of the blues that split off into stoner doom and bluesy psychedelia, am more inclined towards Black Sabbath than John Mayall, but I can definitely enjoy what someone like Montoya does.

But interview him? Actually, I tried to see if other people would take the article; I wanted to help get the show press, but I didn't really want to do it myself.

The thing I wrote for the Straight site worked out okay, though, I thought. It ended up pretty brief - Montoya was getting to leave on tour, so there wasn't much time for us to interact - but I got a few questions in, and tried to make them questions that he hasn't been asked in every other interview I've read.

In fact, some of those interviews are much, much better than mine. The best I found, the most interesting, is from Blues Blast magazine. Read mine first, for an appetizer, but their interview is a helluva lot better than mine.

I have no outtakes for you - save one. My wife had been reminded of Dave Alvin by Coco's music. I didn't hear it, myself - maybe in the guitar, but not the vocals, at all; but I could hear some of Phil Alvin in his voice. So for the heck of it, I asked, since Montoya is located in L.A., if he'd ever crossed paths with Dave and Phil Alvin. He replied that, "Being an LA native, my path has crossed with Dave and Phil Alvin since 1980. I don't know them well but I respect their music."

That's really all I have for you, but check out some of Coco Montoya's music. With Paul Pigat opening, how can this possibly NOT be a great night?