Iron Road Re-Ruin Part 3: the SLIP~ons and the Strugglers, playing this coming Friday!

The following is in regard night one of the Iron Road Re-Ruin, this Friday at Pat's Pub. See below for more (I have previous posts with Iron Road proprietor Dave Bowes and an illustrated reminiscence of the Little Guitar Army, which, of course, Bert of the Strugglers was a part of). Note: the third date of the Re-Ruin, on Sunday, has been cancelled.

Part One: The Strugglers

I have seen, in my day, many different bands perform the Dead Boys' (or, technically, Rocket From the Tombs') "Sonic Reducer." Randy Rampage, say. Chris Arnett with Duvallstar. If movie bands count, Hard Core Logo. Hell, I've even seen Rocket From the Tombs do it live - complete with the man who wrote the lyrics, David Thomas (later of Pere Ubu) and Cheetah Chrome (later of the Dead Boys, which is how the song ended up in the Dead Boys' repertoire). But my favourite-ever live version of the song - even including the original authors! - was the Strugglers at Funkys, at a Chris Walter booklaunch, I think for his SNFU band bio. I remember Bert Man's dinosaur (or dragon?) onesie vividly. I actually ended up owning a similar onesie, when going to a Celtic-themed wedding; people were encouraged to go in costume, so I wore mine, figuring that every good medieval-themed wedding needed a dragon. Bert wore it better.

Anyhow - if there's ever been a better live rendition of "Sonic Reducer," a) it was probably by the Dead Boys and b) I haven't seen it. I'm delighted that you all can click the link and watch Bert strip out of that onesie, and puzzled that the clip has only 100 views. Every band who ever presumes to cover "Sonic Reducer" should watch that Strugglers video first, and try to at least come up to that level of energy and commitment. If they can't, they should just leave it alone.

The Strugglers and the SLIP~ons both play the Friday night installment of the Iron-Road Re-Ruin. My old interview with Bert - "Bert Man is a Crummy Struggler," taking in two of his band names - is online at the Straight. My interview with Orchard Pinkish, also of the Strugglers, is on my blog. (I must have been annoyed with the Straight that week - someone probably changed one of my pronouns). Here's a quick catchup with Bert about the Iron Road Re-Ruin.

Note that, if I understand Bert Man's answers to my questions correctly, the Iron Road Re-Ruin Friday night gig marks the end of the Strugglers. This creates practically a moral imperative to get out and see the show. 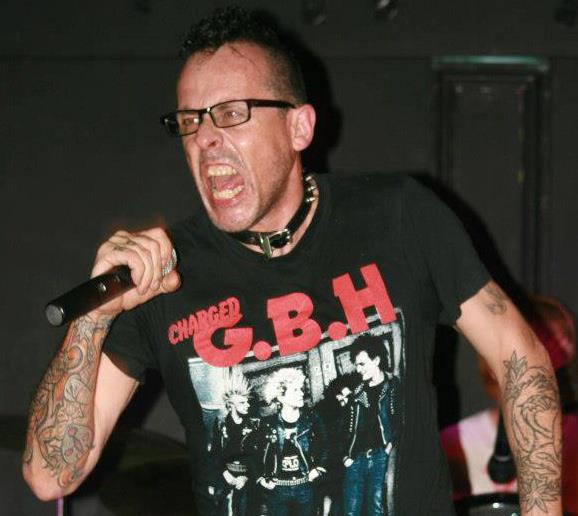 
I spent a giant chunk of three lost years there. Some serious debauchery. I mounted a rearview mirror on the monitor to do rips off of. I had no investment at all besides trying to have a seriously good time every time I was there. My days at Iron Road were key to finally quitting drinking and powders for good simply because it was so fucking crazy there, always.

How were you affected by its closure?

I had to find another jam space. The rock must roll.

I've never been anywhere where you could do whatever the fuck you wanted 24/7.

Really hard to pick one. The things that stand out the most are just happy laughing moments of shenanigans more than actual shows (though there was plenty of those as well.)
What will you be doing at Pats? Is there anything special you’ll be whipping out to honour the occasion?

I think we want to honor the memory and send the Strugs off in a
suitably spectacular fashion.

Who is in the lineup of the band you’re playing the Re-Ruin with?

Saturday. Lots of great friends are playing that night.

Any other relevant stories you want to tell? A new album? Merch? Comments on your bill-mates? Future plans?

Nothing to report regarding the Strugglers. Crummy has an EP coming out and we are going to Japan in October. 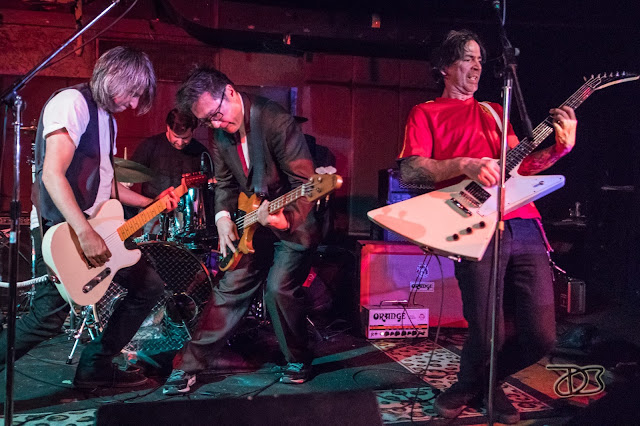 The SLIP~ons at the Media Club in 2017, photo by Snapshot

Speaking of covers, another band that can kick the living shit out of a cover tune is the mighty SLIP~ons. I've seen dozens of bands do dozens of covers in the last few years, but by far the most exciting, fresh, and fun cover I can recall in that time was the SLIP~ons at Keithmas, doing the Stones' "Tumblin' Dice." (I shot video of other songs in their set  that night but not that one, sadly). They walked the perfect line of tension between falling apart (contained in the original sprawl of the song) and being tight as fuck - which is probably not an easy thing to master, but is kind of essential to the rock experience. Too much polish and professionalism kills rock; it's why I came away from seeing Iggy and the Stooges in Seattle (with both Ashetons still alive and playing!) really not having entered the experience, because it was all just too perfectly orchestrated, too "professional;" even Iggy's stage dives felt like the stage dives of someone who has stage dived so many times that there was no danger, risk, freshness or excitement in it for him - for all I know, he stage dived at exactly the same point of the songs every night (I gather a few years after that he broke a rib or such in a stage dive and has since discontinued the practice, so I'm glad to have been there, but I really didn't feel it that night; maybe it's just me).The SLIP~ons, you trust, will absolutely never ever be polished enough for you to ever doubt that their hearts are fully in it. Fast and Loose, like Eddie Felson: that's the SLIP~ons.

Of course, they're not just a cover band, and I plan to be giving them some press about an upcoming 7" - presumably of two originals - sometime soon. But they can do a cover very, very well: the New York Dolls, the Undertones, the Replacements - they always bring the same excitement to the songs they do.

Here's Brock Pytel (of the SLIP~ons, but formerly of the Doughboys!) answering exactly the same questions I put to Bert Man. Brock didn't answer all of them. That's allowed.

Iron Road was kind of a late night hang out place for me back then. I wasn’t super invested in the space, and Dave and I were more acquaintances from the same era than the good friends we are now.


How was the space different from other spaces you’ve played in? (…because I can’t think of another venue or jamspace that has had its own tribute show…).

Iron Road was pretty typical of the kinds of venues I used to play on tour with the Doughboys early on. It wasn’t exactly a VFW Hall, but back then it was very common that a good amount of your weekday gigs would be put on just about anywhere the local promoter could find. That local promoter would sometimes be a teenager and the venue would sometimes be a pizza restaurant or more commonly, an empty warehouse or someone’s basement. The Descendents even traveled with extra 4x12 cabs that became the PA system on those days. Sadly, this kind of show seems to happen less for us now.

We only played Iron Road one time, and it was one of SLIP~ons very first gigs. Dave was probably one of the only people in Vancouver that had any idea of my previous music “career” so we were grateful to have a chance to play, even if it did mean going on at like 2am. Our drummer was Adam Fink (Actors, Gang Signs, etc) back then so it would be a fond memory for that reason alone. It was also without a doubt the single worst set we have ever played in public, and unfortunately was recorded live to multitrack. I will pay a bounty to whoever still has those masters to destroy them. I’m looking at you, Brian Else.

I think we will probably just try our best to sound a little bit better than that night. I never know what Shockk is going to whip out during the pause in “Cork & Kandy Glass” (the B side of our upcoming 7”) but that Replacements version of “Fox on the Run” on the LP you sold me was sure inspiring…

Who is in the lineup of the band you’re playing the Re-Ruin with?

The lineup is the usual SLIPs one, Brian Minato on bass, Shane Wilson on drums, and myself & Shockk guitaring.

Thanks, Brock!
Mind you, I don't actually think Ron Reyes will be showing us his "thing" on Saturday, but he's certainly the next in line for these mini-interviews. He mentioned at the Chip and Tony Kinman event, blogged about below, that Piggy had a new singer and was really excited about the gig. Pretty hard not to be. More to come on that!

Here ends Friday's press, but you can read more about the bands performing (as written, presumably, by Dave Bowes), and even find out about set times, on the event page. I have no clue who Sexy Decoy is, I've never listened to (old-school California punk band) the Authorities, and I don't know To the End, but I guess I'm going to expand my horizons. 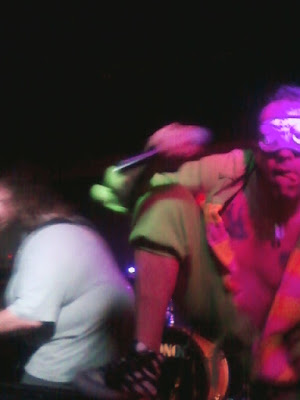 Posted by Allan MacInnis at 6:29 PM

iron road WAS A FIRETRAP MASQUERADING AS A GIG VENUE. It was a horrible place to be. The travesty that this dirk fellow would have the gall to put legendary Fleshtones there is simply a musical crime. Thankfully nobody died. But to honour this man and his firetrap 'rehearsal space is just wrong. Frank Finklestein.

Thank you, Frank Finklestein, if that is in fact your real name, for reminding us that safety should always be our primary concern when getting our punk on. What are those kids thinking, stage diving without properly certified, padded body armour? Unfortunately, the gall and effrontery of the proprietor and promoter of Iron Road was supported by your beloved Fleshtones, who had a great time playing somewhere out of the usual run of venues they encounter. To paraphrase an old saying, you either end up with a good venue or a good story.