This is the second of several pieces pertaining to the upcoming three day event known on Facebook as the Iron Road-Reruin: the Festerval, commencing this Friday at Pat's Pub with a show from Authorities, Strugglers, Sexy Decoy, Slip-Ons and To the End (event page here). There will also be a show Saturday; Sunday has been cancelled. Part one is here. More to come!

I don't really know Dave Bowes - of Stable Genius promotions and the Unstable Idiot podcast, all that well, but I suppose I was kind of his "employee" for awhile, when I wrote for the Skinny. I like the guy; he writes well (and has even caught me in the odd error!), has taste in music similar to mine, is always witty when I see him at shows, and puts on a fun gig. He's the man behind the Bowie Ball at the Rickshaw, for instance, and the man that successfully brought the Dead Boys to town a few months ago, and unsuccessfully tried to have lightning strike twice by booking them a second time (it fell through). He also did the very nice thing of getting Motorhead to sign an issue of the Skinny for me, with a bev davies pic on the cover; I had done the all-Motorhead all-MacInnis issue of that paper, also looping in, besides a big Lemmy feature, some New Model Army and Reg Harkema testimony about Motorhead (Justin Sullivan talked about Lemmy's collection of Nazi memorabilia and Reg remembered seeing them at Kerrisdale, and destroying some signed albums of theirs he had, when he heard the song "Don't Need No Religion"). Thanks to Dave, I have a signed Skinny with Bev's photo and signatures from Lemmy, Phil, and Mikkey. I wasn't being much of an autograph whore back then, so it's nice to have that as a souvenir of that time...

Of course, Dave was also the man behind Iron Road Studios and the upcoming three-day "Re-Ruin," so he had to figure in the series of interviews I'm doing... 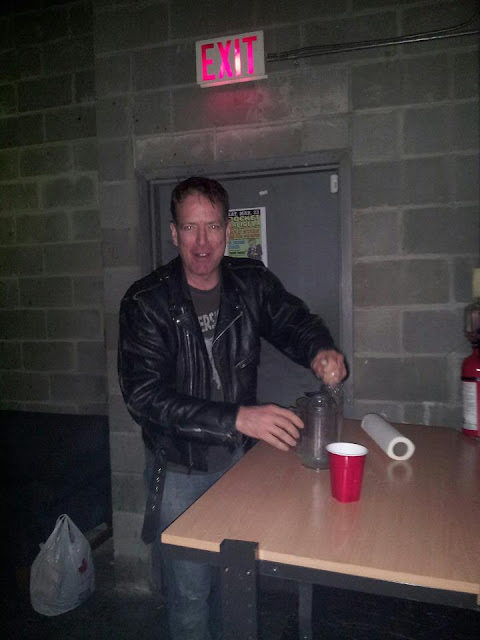 Photo provided by Dave Bowes, of "me at the time, actually at Iron Road, actually cleaning or doing something bizarre, the two things I actually did the most there."

Allan: Are you Dirk or Dave, for purposes of interviews? How should I describe you re: Iron Road? (Why do you choose to describe your promoting endeavours as "stable genius" and your podcast as "unstable idiot," btw?).

Dave: I'm always Dave for all purposes except fucking with Zuckerberg. I had my real name on FB until they started hassling friends (e.g. wendythirteen) about their noms de facebook and I thought, well, I'm not going to make this easy for their data miners by just giving them my real name, so, Dirk Bently it is. Contrary to rumours and conjecture, it is not a reference to Dirk Diggler or Dierks Bentley (whose existence I was blissfully unaware of before the change) but to Dirk Gently of Holistic Detective Agency fame and I thought ‘what if he was a punk and had to have a stupid punk name? He'd be Bently instead of Gently. ‘ My role at Iron Road? Impresario? Yes, that sounds nice.

Stable Genius is a nod to the great and glorious leader of the free world about whom I’ve developed an unhealthy fascination. It’s like a car wreck: can’t turn my eyes away. I actually devote far too much time to keeping up on the nuances of American politics as a result of his Orangeness. It’s a problem. Unstable Idiot just flips the phrase to an unironic posture to keep the branding grouped.

How did Iron Road get started? What was it before Iron Road, and was it originally a jamspace or a performance space when it got going? Which came first?

Iron Road started with discussions with Pierre Lortie, who was doing promotions at Pub 340 at the time. He agreed to come on to run a jam space day-to-day if I put it together. The location was originally one huge cinderblock room previously employed as a warehouse. It was right after the Olympics and I'd heard the VOC was giving away modular wall panels so I thought it would be a good idea to get a crew to build rooms with them from scratch. It was not. The amount of labour to get them up to code... don't get me started. I was really banking on the 5 plus 5 year lease but unfortunately they fucked us out of that with a demolition clause. Thank you Wall Corp! Hats off to the original owners, a nice Portuguese family who swore up and down they weren't going to sell it to developers.

What are some moments that really stand out for you, there? If you had to pick a top five gigs...

Dead Moon. It was their last full band outing here, I think. They came again as a drummerless duo but it was not the same. The set was high heat, Fred and Toody were very affable and their drummer liked to party. Nuff said.

The Nerves was a crazy affair. We had four opening bands! Tranzmitors, Greenback High, Living Deadbeats, Chains of Love. It was more of a Nervesfest than a Nerves gig. Paul Collins was a total douchebag. My girlfriend offered to drive them from their accommodations to the gig and he yelled at her because the driving wasn't up to his standards. Peter Case and the rest of the band were literally rolling their eyes as he went on and on about how substandard everything was. We were gratified to hear he got kicked off his own tour a few dates in! Show was amazing though.

Thrones and Helms Alee was epic. Was reminded how great Helms Alee is at the Melvins last Thursday.

Fleshtones apparently still talk about their time at Iron Road. Evan Stewart ran into them overseas and the first thing they asked him was what was with that place? I remember when they got off the elevator at load in, Pete Zaremba said "charming place. Reminds me of a bunker we played in Poland." Gig also notable because Split Squad opened with none other than Clem Burke on drums.

Burgerfest was ridiculous. Metal doom and stoner bands all day and all night. Burgers in the courtyard. We did that for a couple Canada Days as well. Those were fun marathons of overindulgence of every kind.

To get the Toasters over the border we had to pretend it was at the Ukrainian Hall and made maps and signs to put up there redirecting everyone who didn’t get the memo. Bucket smuggled some of his homebrew in. Had fancy Toasters special brew label and everything. I still have a bottle.

Mongoose was scheduled as a much anticipated reunion. They were well loved in Van back in the early mid-oughts, if you recall. The night they played didn't work out so well though. it was so hot the amps overheated and shut down twenty minutes into the set. So much for anticipation.

I booked the Mahones for a number of years here. One time I went ahead and did it at Iron Road. They played a killer set as they do. Afterwords in the green room Finny quietly took me aside and said not to book him there again... but he was having the best time of his life.

Did the Authorities - the out of town headliners on the first night - ever play there before?

Yes, they played with Piggy and Car 87. Funny that all three bands are doing the reunion.

SNFU was great, rumour has it they might play the last night of the reunion.... Lots more I will update if I have time.

Then there were the war zone gigs: when (name redacted) lit off a bottle rocket during a performance and the room had to be evacuated; the brawl in the lobby that left a haze of mace for everyone to walk through for the rest of the night. Etc etc. So.. highs and lows, you might say.

It closed because Wall Corp bought it (see above) and turned it into the ugliest condos in Vancouver. Made to look like boxcars, but not really. Yuppie faux hobo chic boxcars.

What made you want to organize the Re-Ruin? (I don't recall any tribute shows to venues before - "Celebrating the Laundromat/ Richards on Richards").
People always bring it up to me, which i realize is kind of like a nine month pregnant woman saying pregnancy must be important because everyone keeps mentioning it to her, but there’s a special place in some hearts for it, for sure. I wear one of the few surviving T-shirts from time to time and it always sparks animated conversations. Those T-shirts will be available at the gigs for the first time since Iron Road closed, by the way.

Would you ever want to run a venue in Vancouver again? What is the state of things since the days of No Fun City, in your eyes?
Iron Road was the 6th such venue I’d put together since the 90s so, no, I’ve had my fun. Maybe at some point a legitimate, licensed venue. I was part of a group sniffing around the Railway when it lay fallow for a year but nothing came of that. Who knows what the future brings? State of things... I think Gregor for all his rancid carrot juice and living in the pocket of developers did loosen up the hold of the blue hairs on Vancouver. Policing eased off on alternative spaces. And the province simplified liquor licensing, so the need for underground venues overall is less than it was in the worst days of No Fun City. It’s nice to have some still, though. Blue Haus, Static Jupiter, etc. Nice to know there’s still a place you can go that The Man does not technically approve of. Gentrification is an ongoing battle, of course. Though I am mystified why rich people don’t seem to like punk rock. 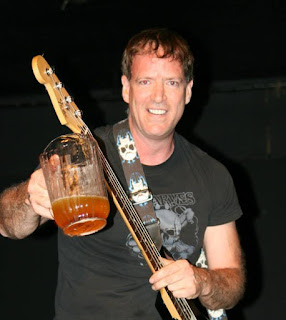 More to come!
Posted by Allan MacInnis at 3:36 PM