Speaking of Vancouver... upcoming at the Cinematheque

Harry Killas is continuing his series of BC films at the Cinematheque. The one I'm particularly excited about screens February 1st: Zale Dalen's under-appreciated Vancouver cult film Skip Tracer,  a pointed, politicized, slickly paced dramatic thriller of continuing relevance, about debt collection and capitalism and such. I wrote about it here when it last screened at the Cinematheque, courtesy of Michael Turner, and incorporated some original interview material. I haven't seen it since that time, but I'm ready, and it's nice to note a poster has popped up online. 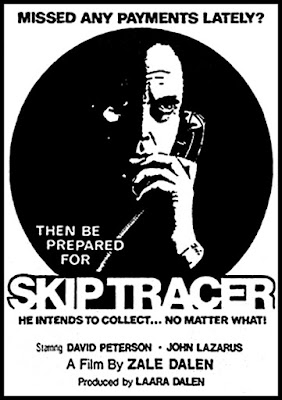 Of Killas' other choices, Deserters also sounds interesting, but I haven't seen it. I haven't seen She's a Boy I Knew, either; and while I have seen My American Cousin - which I remember as a colouful, charming Okanagan girlstory - I have no particular memories to share (though note, I was an extra in the sequel, American Boyfriends, in a scene shot in the Hollywood Theatre, though when I rented it on VHS I couldn't find myself in it). 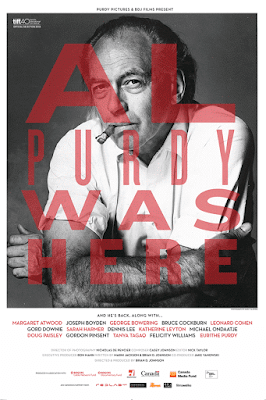 Also at the Cinematheque, fans of Charles Bukowski will maybe want to look at Al Purdy Was Here. Setting aside all the Canadian literati that apparently grace the screen - I gather this is a somewhat testimonial-rich film - he was a friend of Bukowski's, which is kind of pleasing to note, and Buk was the person who turned me onto him, in fact. Maybe it's a bit of an ass backwards way for a Canadian English lit student to discover one of our better writers, but so be it. It was amusing to Google one of his more entertaining poems, "Flat Tire in the Desert," hoping to quote it, and stumble across my old Amazon review of a previous anthology of his writing (there have actually been three such books, released over a bizarrely short time period; there's a fun piece by Rob Taylor online on the last one). There is a small selection of Purdy's writing on the U of T website but they don't have any of my favourites, which tend to be his funnier, earthier moments ("When I Sat Down to Play the Piano," "The Winemaker's Beat-Etude" - the first about Purdy being menaced by shit-eating sled dogs while attempting to poop in the Arctic, the second about being investigated by cows when picking wild grapes, if memory serves; you can kinda see why Bukowski liked him, eh?).
Posted by Allan MacInnis at 8:31 AM