Of Pete Campbell, the Wardells, and the Sweaters, re: David M.'s Ukrainian Christmas Alone in No Fun City 2016

Well, that was fun! 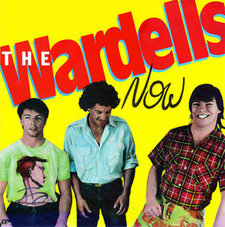 Before last night's Ukrainian Christmas Alone in No Fun City gig, backroom at the Railway, David's frequent co-conspirator Pete Campbell did that unsettling thing that happens sometimes of saying something that reminded me that people sometimes actually read what I write here and remember it. He'd noticed my outing his cheat sheet, for one, for "Claus Will Tear Us Apart" (he wouldn't need a cheat sheet if he got to perform it more than once a year, he quipped, after having to remind me what he was talking about, because I just write this shit and forget about it, folks). He then laughed at my observation in the show review for David's December 23rd gig that a "creeping professionalism" had manifested itself - actually not a phrase I seem to have used, unless it was in an early draft and then got edited out, as sometimes happens (But it might have been Pete's phrase, too). Anyhow, I asked him if he had, in fact, been in The Wardells, because, y'see, I had had the experience of contemplating buying a Wardells album, based solely on wanting to check out Pete's songs in a non-David-M-related context, and being non-plussed that all the band members were, in the mode of the Ramones, listed as Wardells; even if he had been a Wardell, he might not have been IN THE BAND at the time of the album, based on the back cover, so I didn't bother. Apparently, Pete confirmed, he was Jim Wardell - he explained that the band had crafted an entire fictional bio around their characters, which you can find in the liner notes for (one of?) their album(s?). (I am hesitatingly providing a plural because if the album I saw is the one I've found a cover for, I surely would have recognized Pete on the right).

So I should have bought that album. Damned if I know where I saw it. 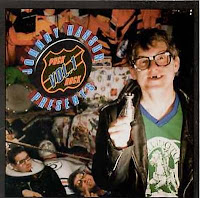 Anyhow, here's the thing. I have long loved a song that I know nothing about, by a band I know nothing about, that pops up on Johnny Hanson's Puck Rock Vol. 1. It's one of those brilliant moments of popcraft that you stumble across and, because you know nothing about it, and can't easily find out anything about it, you just give up and appreciate it as a mystery. It's the Sweaters' "Hockey Sucks," a very smart and funny number about being a full-on Canadian (like me) who is nonetheless completely alienated by hockey culture (like me! I too am "on the outside all winter long"). The song is not on Youtube, and good luck finding any Sweaters songs on Youtube, or anywhere else, in fact, because you know what you're going to get if you Google "Sweaters," knowing nothing else about the band? 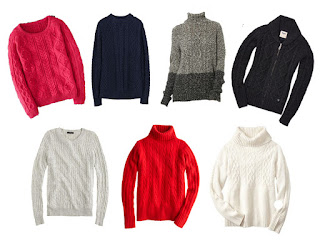 And if you Google "Sweaters Hockey Sucks," you get pages directing you to Johnny Hanson's Puck Rock Vol. 1, which, hey, you already know about. So you just give up and allow life to have a mystery. 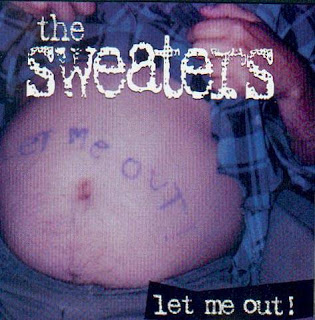 But if you Google "Sweaters Pete Campbell" - well that's the magic decoder ring, folks, which brings you to this page. And I only know to do that once I discover (this very morning) that the Wardells morphed into the Sweaters, somewhere back there. And that's how I discover (THIS VERY MORNING) that I have seen the guy who wrote and (presumably) sang one of my all-time favourite mystery songs on a dozen occasions, never knowing who he was. In fact, you can find out a lot about Pete Campbell (who also, note, has a not-very-Googlesmart name; lots of Pete Campbells out there) by Googling "Sweaters Pete Campbell," or "Wardells Pete Campbell."

I also discover that Pete does something that I knew nothing about, performing at Long Term Care/ assisted living facilities across BC, as part of the Sing Along With Pete project... which is kind of funny, because I was thinking of asking David if HE ever did something like that (because I didn't end up bringing my Ukrainian-Canadian mom out to the show last night, though I contemplated it; too hard to get an 85 year old from Maple Ridge to Vancouver by bus and back). My Mom's building is not quite the same thing as what Pete performs at - it's an independent living facility - but it's not entirely different, either. There's a common area, and it had been used for concerts occasionally when my father was the caretaker, though it hasn't been, to my knowledge, since he passed on in 2009. 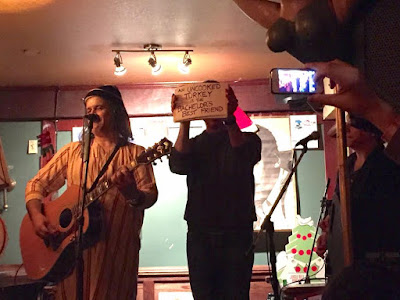 So anyhow, that's a productive morning of discoveries. It kind of outshines whatever it was I was going to say about David M's show last night, though I might note:

A few lookie-loos aside, eight people came and stayed, including my girl and me.

David did a stripped-down version of his Dec. 23rd show, sans Ed, and with a couple of new/ different songs (like a cover of "Money"). Mostly he forced the word "Ukrainian" into his Christmas songs, heedless of whether it scanned, and occasionally donned a Ukrainian accent and attitude towards life (Eastern European cynicism and world-weariness).

David and Pete did a great version of "(What's So Funny 'bout) Peace, Love and Understanding," one of the few straight-up, respectful covers of the night.

Lester Interest's reading of "The Green and Red Plague" was quite brilliant and entertaining, and pretty much the same as the one on the 23rd.

Hologram Paul Leahy sang "The Little Drummer Boy" and David menaced us with a creepy Li'l Baby doll and evil skull-light affects, attacking Hologram Paul with it (the "Paulogram"), one of various times during the night when Dave Dedrick (the Paulogram assistant) ended up on the floor.

David obviously feels comfortable with Erika now because he did both "Why Are We So Fat" and "I Liked You Better When You Were Fatter," both of which he has typically omitted from sets when I have brought Women of Any Size to his shows (though he's never seemed sensitive about MY being fat).

...And in fact, during his surprise encore, by-popular-demand invitation to harass and sit on the audience and such, he even sat on Erika briefly, making her part of a truly elite Vancouver group whom no one is paying much attention to at present.

Where the show on the 23rd was actually really quite polished, no traces of "creeping professionalism" were observed last night. Maybe it's the difference between a suit - even a torn one - and the Scrooge drag that did it? Mere anarchy, tripping hazards, lyrical gaffs, and the aforementioned forced addition of the word "Ukrainian" erased whatever traces of "slickness" were to be found in the show on the 23rd.

All in all, a fun show, and the only time I have seen two David M./ NO FUN Christmas shows in one season, I think.

Anyhow, I'm now going to stop writing and listen to the Sweaters sing "Harder," which fits with things I've been thinking about lately, remembering how passionate I was about Becoming a Music Journalist back when I first interviewed Lemmy, compared to, say, now. Then I'm going to see about acquiring some Sweaters CDs, and seeing if Pete wants to come play for my Mom's building.

...Oh: "The New Reindeer" turned out to be Dal Richards.
Posted by Allan MacInnis at 9:28 AM