2016: Year of the Living Room, with Red Herring and David M.

So far my two favourite concert experiences of 2016 have been in people's living rooms. I'm not sure anything I might go to at a proper venue this year could equal these experiences. 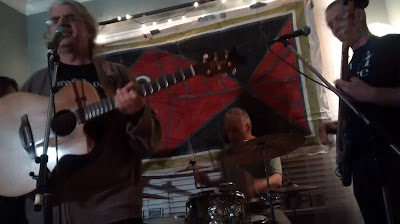 The first, on January 1st, was seeing Red Herring at Id Guinness' place in New West. It was a very intimate night, where Enrico Renz signed my Gleebs of Wizagon and Erika Lax and I got treated to some of our favourite Red Herring tunes, including unreleased ones, like "Consuela" and "The Monkey Song." (The latter is discussed to some extent in my Red Herring interview of last year). The band had put everything in their repertoire, including a few Stephen Nikleva solo tunes like "Macedonian Polka," on a numbered list, and had us call out numbers to decide which songs they were going to play, though they let Erika and I cheat a little. "The Monkey Song," my pick, is a pretty heartbreaking number, actually, in which a lab animal sings of his gratitude to the superior race for making him useful, and contemplates the relative lack of utility of his old, free ways ("to think I was just swingin' through the trees"). I think Erika raised an eyebrow that I requested such a downbeat song at the peak of what was, after all, a fuckin' New Years' Eve Party, ferchrissakes, Al (profanity mine, not hers, but you get the idea). She has a point, but for me, it was a perfect way to release some of the darkness and sadness of 2015. Todd Serious - passionate about animal rights - would have approved of it. 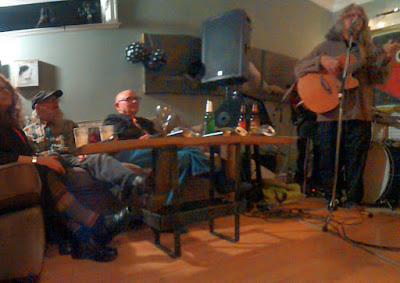 And speaking of people who aren't with us anymore, the most touching moment of the night came when Id explained to me in the kitchen that the boots sitting on a window ledge (top left) during the show belonged to Elizabeth Fischer. Someone had bought the boots off her at a garage sale and they felt it was the perfect way to include her in the evening - "it would have felt wrong without her." No doubt it was my last show ever with Elizabeth Fischer in attendance, which is pretty fitting, really, considering my last two were Red Herring's first reunion show at the Prophouse and Stephen Nikleva's solo show at the Waldorf Tiki room. 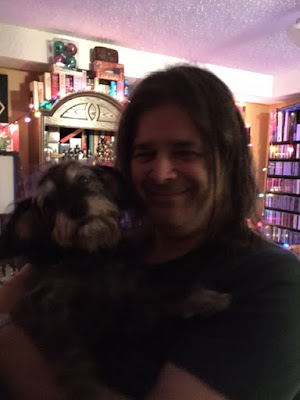 Then there was David M's show last night, paying tribute to David Bowie - though it wasn't a Bowie tribute (see below) but a "small salute." It's odd: a person in my circle chose to go to a faceless "Bowie Tribute" at a local venue, paying money to dance to DJ'd David Bowie songs, despite having been invited to this intimate, private, and money-are-you-kidding evening in what turned out to be, yes, David M's living room. I guess I don't understand that! But it was a real privilege seeing David perform a personal selection of his favourite Bowie songs - beginning with "The Laughing Gnome," from way back, but also including "When I'm Five," "Five Years," "Absolute Beginners," "Moonage Daydream" (aka "Elf Toymaker,' in David's Christmas repertoire), "Fantastic Voyage/ Boys Keep Swinging" ("the same song," as David demonstrated), and "Suffragette City," which turned into a singalong with the one member of the audience who a) knew all the words and b) could harmonize perfectly with David. There were probably a few other songs that I missed. Ten people filled the couches and chairs, and Ozzy went between them, wagging his tail, occasionally pausing to gnaw on a chew toy, obviously happy to be part of such a warm, social night (though not a socially mediated night: no cellphones came out, so if you weren't there, you weren't there). 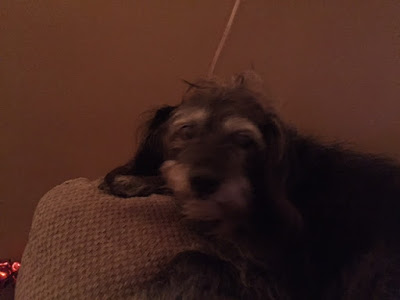 The whole thing confirms a thought I've been having more often lately, that Erika and I (and people in general) should entertain more frequently at home. Why spend large sums of money to sit/ stand among strangers and consume culture, when it can be shared among friends in a living room? Maybe 2016 should be "the year of the living room." I will get working on it (though it also occurs to me that it might be fun to host a film event again this year, with live music, so we'll see how that goes).

Incidentally, I just stumbled into this documentary of Vancouver independent music circa 1984, with footage of a host of bands, including first-gen Red Herring in 1984, at the 27:30 mark (same lineup as now but prettier).

Thanks to all involved for these two memorable evenings!
Posted by Allan MacInnis at 11:21 AM

Didn't mention that David screened us The Linguini Incident, which I'd never seen. Fun film - it would fit perfectly with Jim Jarmusch's Permanent Vacation and Martin Scorsese's After Hours (and probably other films I'm not remembering) as an evocation of a certain lost New York, of artsy ambitious types working restaurant jobs and plotting, always plotting... I'd never seen Andre Gregory do comedy before: he upstages Buck Henry! Fun film.

"The Linguini Incident" was shown on laserdisc, for additional 1992 authenticity. The DVD was there, too, but no. Also, don't forget the party favours (CD and poster), open-fridge policy ("Help self!" as mom would say), and Christmas/Bowie interior decoration.