Of Pete Campbell and the Sweaters, part two, plus a trip to Krazy Bob's in Langley

I had a rather depressing day poking around Surrey yesterday, doing a once-productive route between Gateway Station and Surrey Central. The Value Village is gone (so is the one at Edmonds, incidentally, where Abriosis' Alxs Ness used to work). There's an uninspired DVD and game store, near Surrey Central, where I'm pretty sure the guy behind the counter thought I was shoplifting, even though he had nothing in his cases; I left without buying the one DVD I actually kinda wanted, because his implications annoyed me. I netted almost nothing poking about the DVDs at the pawnshops, ended up buying exactly two things: a used DVD of Three Days of the Condor, for my girlfriend's parents - bought at the MCC thrift store, with the help of some guy who actually had a monkish tonsure - and a Turbonegro concert DVD for my friend Danny that I dug out of a pawnshop for $2. There were a couple of other items I considered - I had a couple of chances to replace my cheapie public domain DVD of Dennis Hopper's Out of the Blue, which appears, somehow, to have erased itself - it will no longer play - but nothing really exciting. I came home pretty clear that there was no point poking about Surrey anymore, ever again.

But I still felt the desire to explore, and my girl has never been to Langley, so today we trucked off in that direction - ironically, going by way of Surrey once again. Langley, however, is much nicer; they've preserved a bit of a rustic, small-town vibe there, making it seem (my girl agreed) like small towns on Vancouver Island, like, say, Duncan. Besides a still-extant Value Village, where my girl lucked into some nice fabrics, there are all sorts of neat shops, plentiful thrift and book stores, and there's a place I've heard about for some time: Krazy Bob's. Which is just jam packed with vinyl, and plenty of CDs and DVDs to boot. There was very little I wanted, but I also didn't want to look too deep, trying to keep myself focused on things I actually really want. Do they have any original Australian Angels LPs? No. Do they have any Townes van Zandt? No. Do they have any interesting horror movies? No, at least none I don't already have. And then it occurred to me: do they have any Sweaters?

Because I just wrote about my discoveries about Pete Campbell and the Sweaters below, and, afterwards, interacted with Pete a bit. He informed me, among other things, that there were three Sweaters releases, one of which - The Pop Thing - he does not have extra copies of; it's their first and best, apparently.

But Krazy Bob's is an interesting place. It's the sort of store Vancouver can't really afford to have, these days, where they sprawl a little, opting more for quantity than quality, and taking full advantage of a fairly generous floorspace. They don't have a lot of hot collectibles that I could see. They don't even HAVE a punk section (I asked). But they do have a nicely organized assortment of items that you simply wouldn't find anywhere in Vancouver these days - stuff that is not quite hip enough or in demand enough to be worth stocking at Audiopile or Red Cat or Neptoon or..., but also not common enough to be easily acquired anywhere else. I mean, you're probably not going to find Sweaters CDs at Audiopile or Red Cat or Neptoon or so forth, nowadays. You might have found them at Zulu once upon a time in the bins of cheap, roughly alphabetized CDs that they had, except they've opted to get rid of most of those, opting for cheap LPs instead. But Krazy Bob's seemed like JUST the place where I might find such a thing. 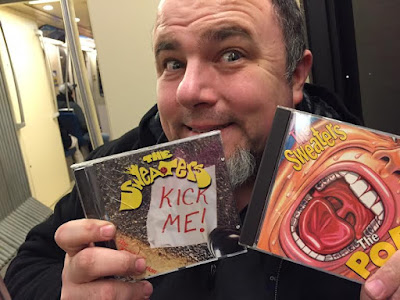 Photo by Erika Lax
Posted by Allan MacInnis at 10:01 PM

Incidentally, Sweaters fans: they had TWO copies of The Pop Thing, so there's still one out there. 204th and Fraser Highway. Costs about $8.

When the guy at the counter saw me buying two Sweaters CDs, he sussed me instantly, asking, "Do you know someone in the band?"

But only kinda. I actually am excited to listen to these!