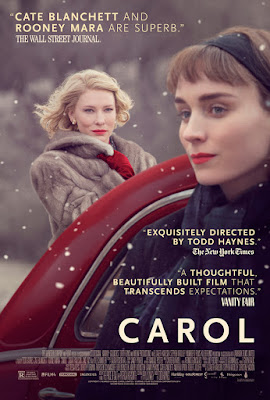 Carol was strangely disappointing, I'm sad to say. I'm not sure I can fully articulate why. Though I have not finished the novel, I love Patricia Highsmith, generally, and was definitely excited to learn that Todd Haynes was taking the project on, because I like Haynes, too (though never more than I did with Safe, which, made in 1995, is getting to be a rather long time ago now). There are certainly inspired and moving moments to the story, to say nothing of the gorgeous cinematography and terrific production design. Somehow, overall, tho', I found the film uninvolving, overly simple, even a bit dull, lacking both a Sirkian flare for melodrama that you might expect from Haynes and the sort of psychological complexity and attention to detail that you get from Highsmith. What I have read of the novel - the first quarter or so - makes clear that the focus of the book is Therese, her sense of alienation from her co-workers, her fears about her future, her inner conflicts about the people in her life; she's a believable portrait of a young woman alienated from mainstream culture, to say nothing of hetero-normative sexuality, and full of anxieties and doubts and ambitions, none of which really is done justice to in the film, where she is very nearly a cipher, a passive eye through which to gaze at Carol (I'm cribbing a bit from Naomi Fry in her New Republic review, here, but she's right!). Haynes is much more interested in Carol, the Cate Blanchett character, and what she represents to Therese. But Carol, too, is also somewhat of a surface creature; other than providing the camera,  Therese, and the audience something to gaze at, and serving as a vehicle for the film's politics ("how hard it was to be a lesbian in the 1950's"), she never really comes to life as a human being, never really is interesting save as an object of desire. Maybe it's just that I have a hard time imagining Patricia Highsmith - a bold, outspoken, cantankerous, difficult, and rather irrepressible woman, by most accounts - being as restrained and inhibited as these women end up being; I imagine her as larger than life and fearless, spilling a messy humanity out wherever she went, ranting about Jews, smuggling her pet snails around in her bra, what-have-you. Therese, by contrast, is boring, and Carol, while gorgeous, is hollow, a symbol of something-or-other whose inner life never really shines on the screen and whose reality outside what she represents to Therese seems pretty limited. In the end, the film Carol reminded me the most of of queer-themed cinema I've seen was, god help me, Brokeback Mountain - it has a similar sort of self-pitying, woe-is-me, being-queer-is-so-hard subtext that rewards its audience for being evolved enough to feel sorry for its characters, but doesn't really take them anywhere daring or provocative. It kind of feels like a pretext for audience self-congratulation, mostly. I'd hoped for so much more!

But maybe the problem is precisely my own hopes? I had, for one, hoped that Todd Haynes would make the film a sort of a homage to Patricia Highsmith - a remarkable, unique weirdo and a fascinating writer. I'd dared to hope even that he might include a couple of snails in the film, say, since she loved her snails so (story goes that Highsmith once brought a handbag full of them to a party so she would have someone to talk to; how can you not love someone who does such things). Anyhow, fat chance, if what I was looking for was something of an homage to one of my favourite writers. Rooney Mara looks a bit like young Pat, below, but that's about as far as the film goes, that I could see, in trying to mine parallels between Therese and Highsmith - neverminding, of course, that the novel contains autobiographical elements. 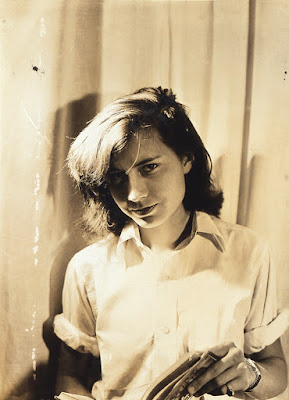 Anyhow, now I've seen it, and I didn't much care for it. There ARE some effective moments, some nicely structured places, some powerful emotional payoffs. Overall, though, I wasn't much interested, don't recommend it, feel more of the same meh I keep feeling when I go to the cinema, lately.

And that would appear to be that. I'd wanted to interview Haynes, before the film came out, but my attempts led nowhere; now that I've actually seen it, I'm kind of relieved.
Posted by Allan MacInnis at 11:24 PM

I will mention that I have also seen The Forest and In the Heart of the Sea in theatres recently, both much more conventional films in their own way than Carol, The Hateful Eight, and The Revenant, but also both enjoyable. I just haven't felt inspired to write about either of them. While it's no Revenant, in fact, Ron Howard's In the Heart of the Sea is definitely worth a look, being strangely under-valued on R/T (43%). Can't say why; though it *is* a fairly conventional film, it's also very engaging and interesting to look at, as a nautical adventure (it's about the historical sinking of the whaling ship Essex, which supposedly inspired Moby Dick). Plus it has great work from a solid cast (Chris Hemsworth of The Avengers and Cabin in the Woods, Benjamin Walker of Abraham Lincoln: Vampire Hunter, and the ever-reliable Cilian Murphy and Brendan Gleeson). As safe and average a filmmaker as Ron Howard is, I've liked several of his films (Ransom, The Paper); In the Heart of the Sea is one of his better ventures.

The Forest, too, though it has a few too many cheap "boo" scares, is not a bad piece of genre filmmaking by a long shot, if you're looking for a ghost story; it doesn't do a bad job of representing Japan, compared to some such films, and Natalie Dormer - who goes looking for her twin sister in the (real-life) suicide forest at the base of Mt.Fuji, Aokigahara - is very interesting to watch, even if the film may have a quasi-misogynist "women are nuts" subtext to it.

The only must-see I've taken in lately theatrically is The Revenant, but In the Heart of the Sea and The Forest were both just fine as entertainments, by me. All for now.

Reading back my old review and thinking that the problem with Carol might be precisely Haynes' aestheticizing of everything, his Sirkian tendencies... It would have been better as something rawer, more human. The film is so beautifully crafted that you just sort of slide over the surface of it...