Northwest Horror Show at the Vancity Theatre: a festival of gore, trash, bad taste and insanity

With the opening night film in the Northwest Horror Show just eight days away, it looks like it's time to put my email interview with event organizer Shane Burzynski into the world! The festival is going to be a must-attend for fans of Vancouver's much-missed Cinemuerte festival, and a celebration of some of the goriest, sleaziest, weirdest and most outlandish horror/ exploitation films out there. Does it really require an extended introduction? On with the feckin' interview! 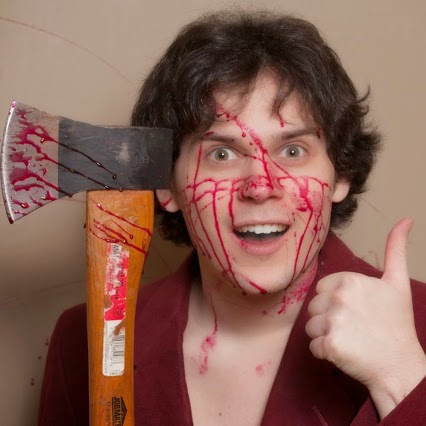 AM: So this film festival is your baby, right? How did you come to organize it?

SB: My big, beautiful, bloody baby! It mostly came about because I've been trying (to no avail) to get these two Duke Mitchell films (Massacre Mafia Style and Gone With the Pope) booked in Vancouver for the last three or four years. The obscurity seems to have kept the interest down for any of the theatre managers, so I eventually decided to bring them myself! During the summer I picked up my blu ray copy of Cannibal Holocaust and found a feature that was shot at Cinemuerte in 2001 and it kind of made me say to myself "Goddamnit, I wish we still had something like that." It also kind of gave me the idea that I could pitch these films a lot easier if I did it as a festival, so here it is!
Its the first film related event I've ever set up and certainly wont be the last. 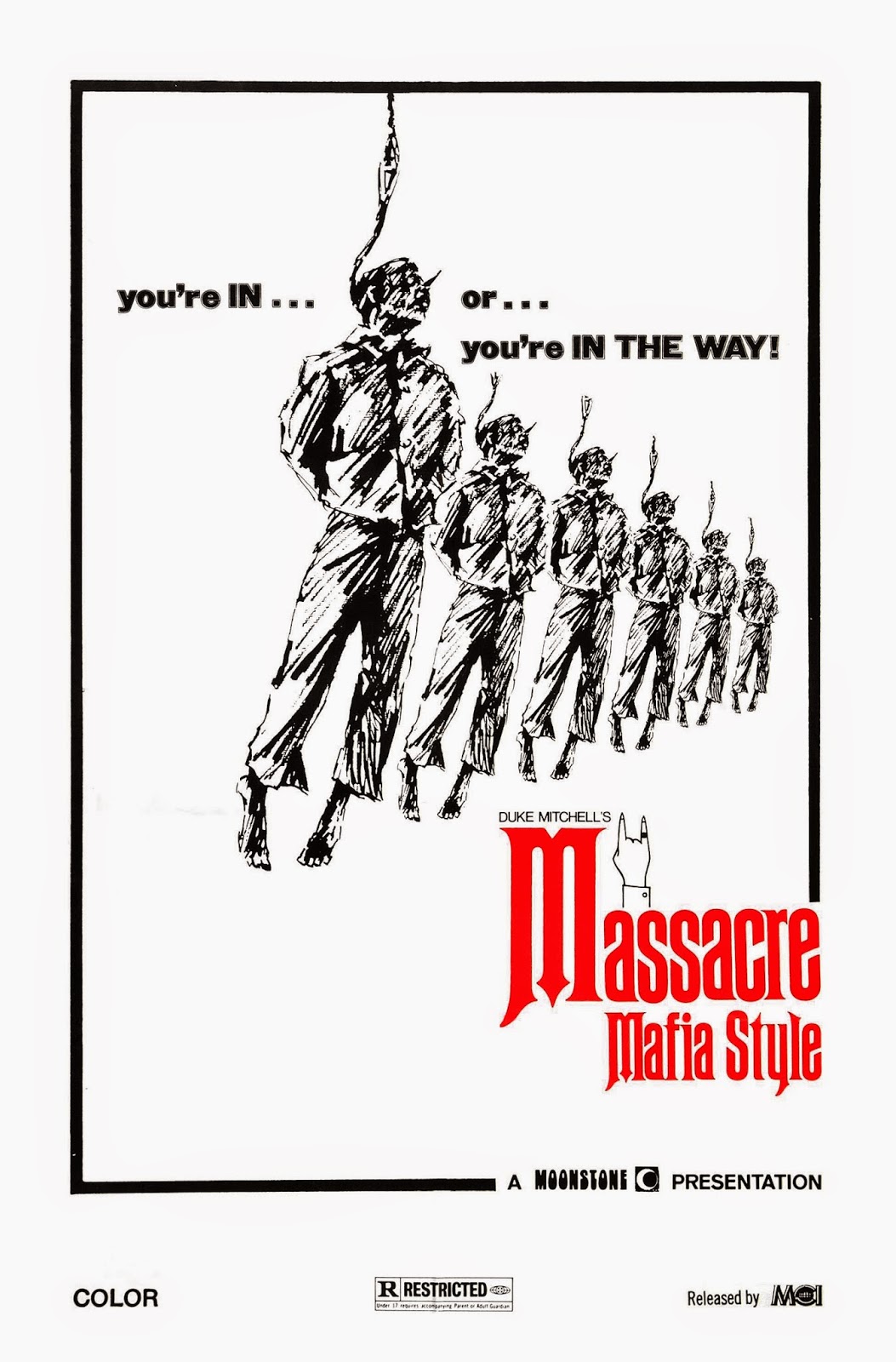 AM: The film I'm most curious about is Nightmare City. I haven't seen it. It seems like one of the most divisive zombie films out there - people either love it or hate it. People on the Horror Blu Ray Maniacs page have described it as "one of the worst zombi films," "horrible trash," "such a shitter," and "crapola," and even people who like it praise the "shittiness" of the film, which is a bit of a left-handed compliment at best. So, uh, could you explain this film's charms? How should we approach it? Does it have any actual ideas in it, is it just outrageous shlock, or...? Is there a must-see scene?

SB: Some of the stuff I've been reading does seem pretty divisive, but most of the horror fans I know seem to really enjoy it. I think there's a couple of problems that keep some people from really enjoying it for what it is. One of them is approaching it as a zombie film which I would call mistake number one. Its a contagion flick and they really don't share any of the characteristics of zombies. They run, shoot guns, stab people, and rip open a lot of blouses! What I really like about it is that its a really fast paced film with a lot of kill scenes that never let up. I also like movies that are constantly changing locations too. A couple of DVD sites might have its naysayers but IMDB sure has a lot of praise for it. And of course Tarantino and Rodriguez are both big fans, but they like a lot of schlocky cinema. I would say that outrageous schlock seems like an apt description of it. Go into it expecting a low budget, a fast pace and a bad ending and I think you'll have a great time! AM: My experience of Brain Damage is that it's an anti-drug movie that drug users generally love. You? Do you know of anyone who has seen it on acid? Would you recommend that?

SB: Haha, definitely on both accounts! The very first time I saw it was at the Rio and the friend who came with me was on acid at the time. The film's got some great humour and visuals so I think I could recommend it to people who are into that kind of thing.
AM: And what's with (Brain Damage director) Frank Henenlotter, anyhow? Is he a big anti-druggie? An ex-druggie? If there's a nastier anti-drug film out there, I haven't seen it, but he seems to be speaking from lived experience.. 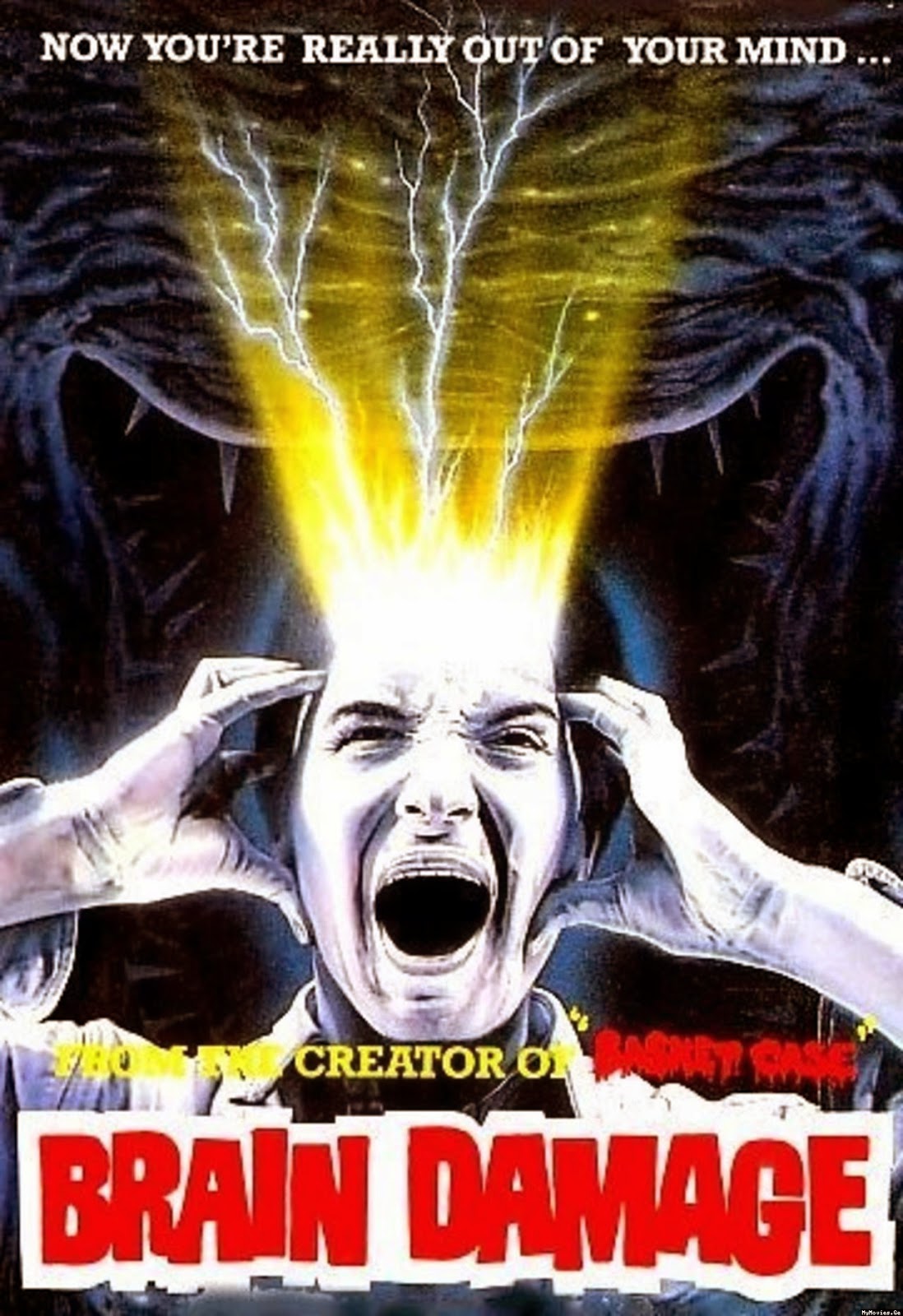 SB: From what I can tell from the audio commentary tracks on his films, interviews and brief words I've had with him myself, I would definitely say he doesn't seem like the type to have been into drugs. He just has a sick sense of humour and probably saw a lot of drug addicts from being around 42nd street so much in the 70's and 80's.
AM: You've said it is your favourite of the films you're screening...?
SB: It's the film that I've watched the most times and will probably return to most often. I really love that movie. 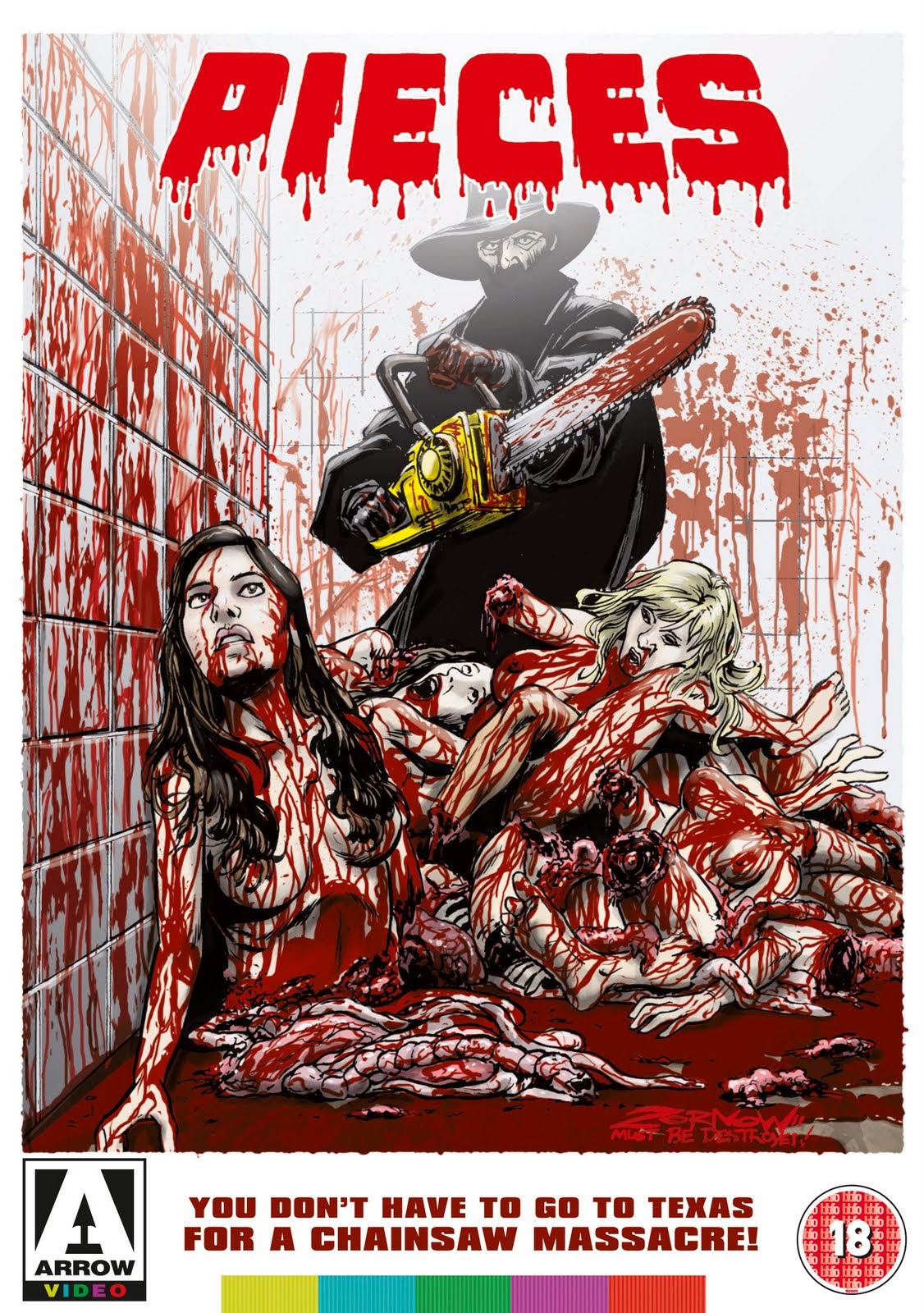 AM: I have not seen the Duke Mitchell films, or Pieces. Care to explain their appeal?

SB: Probably about the same appeal as most of the other films in our line up. The Duke Mitchell films just have that great low budget charm to them as well as being strange and slightly incompetent that just makes for good group viewing. You can also still see the passion for the stories that Duke Mitchell had like with most good cult films. They're really entertaining and the more I learn about Duke the more fascinating everything becomes. The story behind Gone With the Pope is pretty much as great as the film itself and I'm really excited to introduce Vancouver to Duke Mitchell, I think people will be just as enamoured with his work as I am. 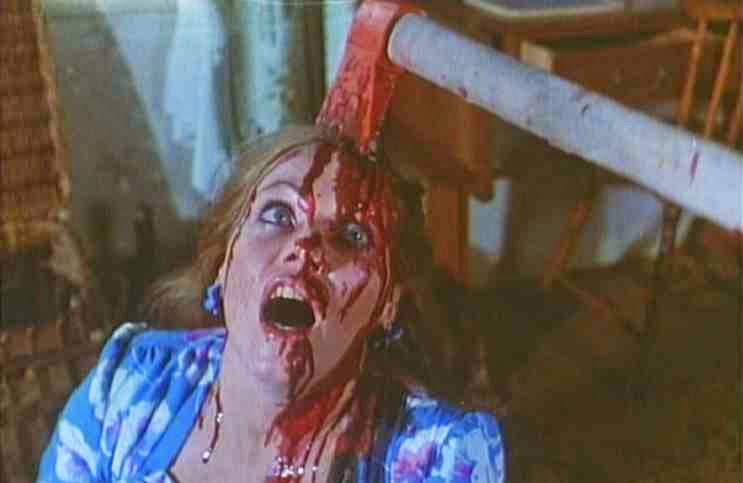 AM: How gory is Pieces?


SB: Pieces is just one of the best midnight movies you could ever hope for! It starts and finishes in the most spectacular fashion and has plenty of the good stuff in between! (and I assure you I'm NOT talking about the acting or direction ;) ). There's lots of gore as well as a fair amount of nudity and a lot of ridiculous things that have absolutely no reason to be there. So many moments that have me in hysterics. Great movie to watch with a drunk crowd! 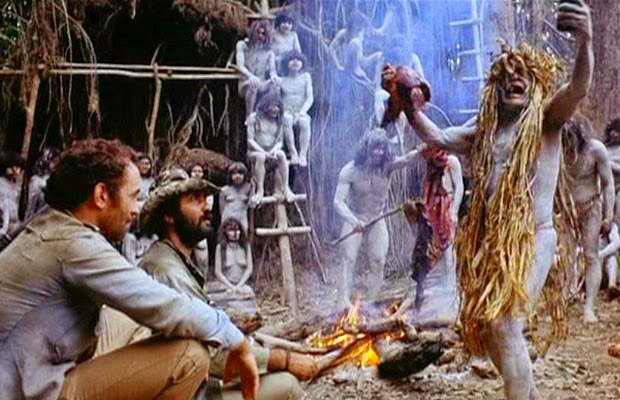 AM: I fianlly forced myself to sit through Cannibal Holocaust a couple of years ago, though I think around minute three of the "turtle gore" sequence I hit "fast forward," because I was both disgusted and really kind of bored by the "look, it's guts" level of filmmaking. I am not a fan, would watch Cannibal Ferox over it any ol' day. But should I give the film another chance? By the way, Eli Roth is out there on video talking about the "impalement girl" and implying that it can't possibly be fake, the way that Deodato claimed. And it doesn't look fake to me. That looks like one dead person impaled on a stake. Do you buy the bicycle seat story?

SB: I totally believe it! Some of the best effects always turn out to be the simplest. In terms of seeing it again, it depends. Some films really benefit from being seen a second time, maybe this is one of them? At this point you at least know what to expect and when to expect it which might be beneficial. Could also be fun to watch the rest of the audience squirm, I always take great joy out of that. I've seen Salo twice in theatres and found it to be a lot of fun counting the walk-outs and reactions. And I didn't really feel like that was what he was going for with the turtle scene. Stylistically I think the way it was shot was more of Deodato's background in Neo-Realism sneaking its way in. I think Cannibal Ferox is a lot of fun but Cannibal Holocaust is better made and more effective.

Jungle Holocaust might be my favorite though, its really hard to top that human barbecue. 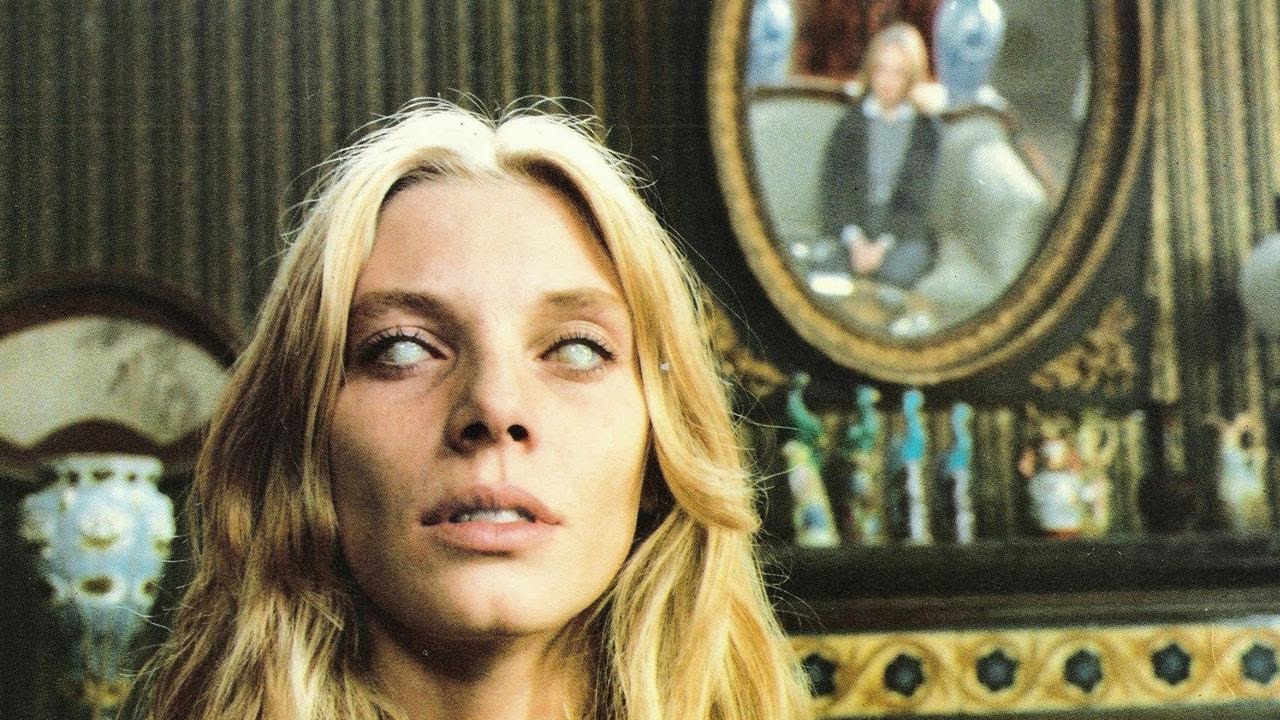 AM: What' are you projecting The Beyond off, out of curiosity? I've had no luck on ordering a Blu- of that, I had it on order for six months at HMV, then a new edition was announced... and then delayed.

SB: Everything is being projected off of glorious 35mm my friend. No DVDs, no Blu Rays. A rule I fully intend to stick by with my company. 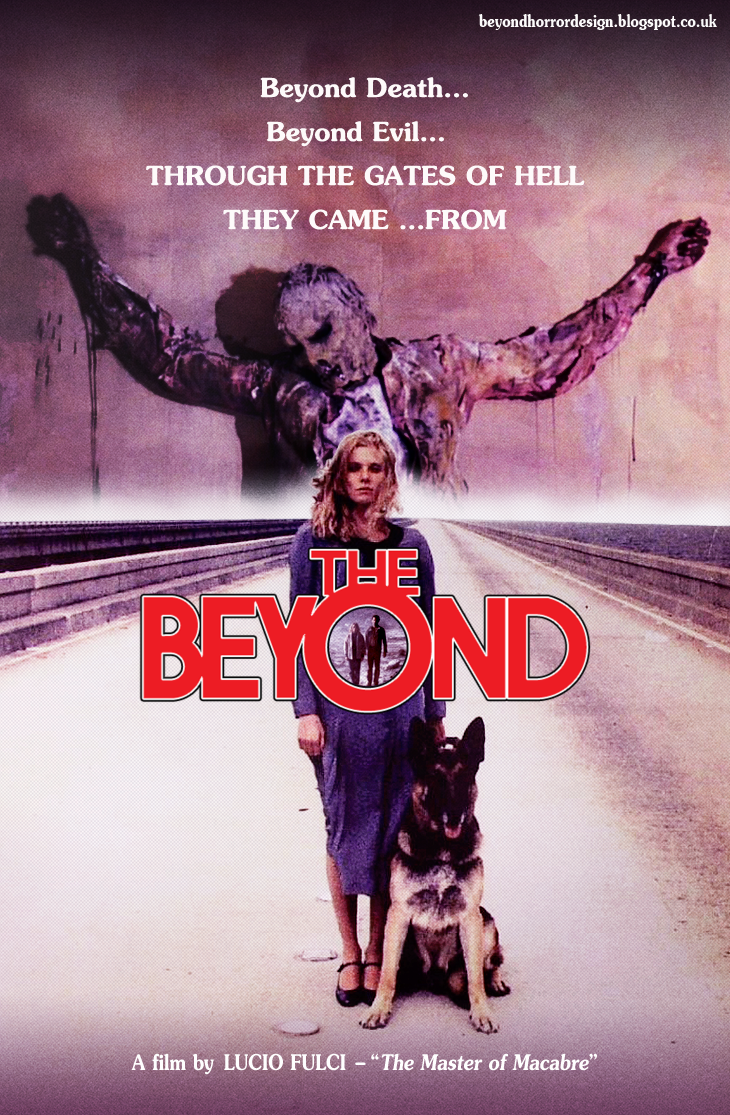 AM:  Wow! That's really putting some effort and money into the fest! So... if there was someone out there with a non-horror geek girlfriend, who would never make it through Cannibal Holocaust, say, what's the "safest" night to come out? (Or is the answer, none of them?).

SB: Either of the Duke Mitchell films should be pretty safe, and probably Trailer Apocalypse. That one in particular is going to be a lot of fun! So I guess the answer is the second night if you left before Pieces... but even that is funny enough to recommend.

AM: Out of curiosity, what's on your most-coveted list of films that are not yet on Blu (or DVD?). And if you do this festival again, what are the films you'd most like to play?

SB: Well, still waiting on that Brain Damage Blu ray! That ones a bit of a thinker as I would've said Massacre Mafia Style and Suspiria, but both of those are coming this year (or have come in the case of Massacre Mafia Style). Would love for Master Of the Flying Guillotine, The Big Racket, Almost Human and Jungle Holocaust to come out as well. Some of the movies I'd like to book in Vancouver are the titles I just mentioned as well as I Spit On Your Grave, House On the Edge Of the Park, Class Of 1984, Street Trash, Cannibal Ferox, Maniac....the list could go on and on! In and ideal world I'd love to get a new English friendly print struck for Beyond the Darkness by Joe D'Amato. I tried to find one for this years festival with no luck. It seems like a stretch to do but crazier things have happened! Never say never!

I have a lot of ideas floating through my mind and some exciting events already being planned. Keep an eye out because Northwest Nightmares Entertainment will be coming full force...

Northwest Horror show kicks off at the Vancity Theatre March 20th with a screening of Italian self-reflexive horror classic Demons. See you there!
Posted by Allan MacInnis at 3:47 AM