Robots on Fire at Kozmik Zoo! 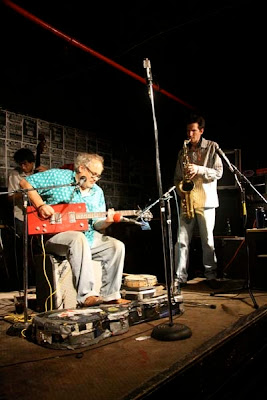 Darren Williams of Robots on Fire with Eugene Chadbourne at the Cobalt, taken by Femke van Delft, and not to be reused without permission (I mean, we likely aren't going to do anything unreasonable like ask to get paid or nothin', we just surely would appreciate the courtesy).

I first met Femke van Delft, my longest collaborator on the arts scene in Vancouver (not countin' editors) when Robots on Fire gigged with Eugene Chadbourne and Han Bennink at the Cobalt six or seven years ago. I later saw them play with Mats Gustafsson there. They're a pretty dynamic unit - I think somewhere they do a free jazz cover version of Black Flag's "My War," if that gives you any idea where they're comin' from. (Bassist Dave Chokroun says that they're "about taking musical traditions, blowing them up, and playing the pieces – including the tradition of taking the tradition, blowing it up, and playing the pieces.") They gig on the 31st at Kozmik Zoo, and tho' I won't be there, and am officially NOT BLOGGING - I am NOT here right now, you are NOT reading this - what can I do but pass on this link I just got sent? ...for those musical adventurers lookin' for something unusual to do that night (a Tuesday, I do believe)...
Posted by Allan MacInnis at 11:08 PM