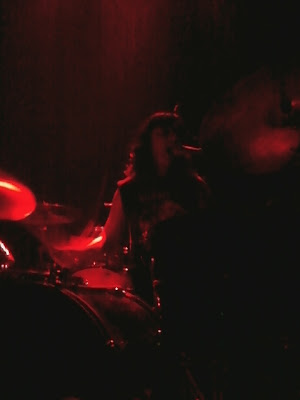 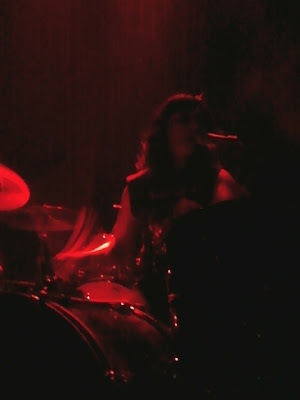 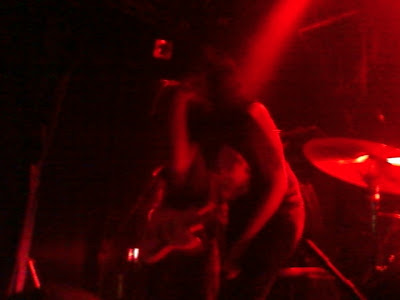 While I've gotten used to being ID'ed at 43 and frisked at the door, the overzealous security staff at The Venue really outdid themselves tonight: I was sitting on a stool in back of the hall, to rest my legs and back after an hour standing in the pit and to better concentrate on the music. My eyes were closed, my head down, and Wolves in the Throne Room were moving me to a transcendent state; sometimes the most intense musical experiences can only be had when one shuts out visual stimuli. Suddenly, at the peak of my concentration, the whole world transformed to this blissful, mournful rising wave of sound emanating from the stage and a ghostly phantom vocalization, like some sort of Satanic Gregorian chant, floating over the music, I feel a hand on my shoulder. I open my eyes and look up, wondering if perhaps a friend has found me: instead it's a bouncer. "Are you okay?" he asks me. If I seemed a bit dazed at the question, it was simply because I can't see what about concentrating to music would make me not okay, but I said to him - politely enough - that I was fine. He responded with a stern command: "Don't sleep."

In case he didn't catch my reply - he was walking away, and the music WAS loud - what I shouted was, "I was LISTENING - it's called music!" (...and then I added a "term of affection" that I will not repeat here, lest I seem uncivilized.) Yes, folks - tonight, I was busted for LISTENING TO MUSIC AT A CONCERT.

Only at The Venue.

Anyhow, Wolves in the Throne Room were magnificent, and it was great to finally see Anju Singh with Ahna, her intense avant-metal duo. She's got a hell of a voice, is one hell of a drummer, and Ahna are one unique musical experience. 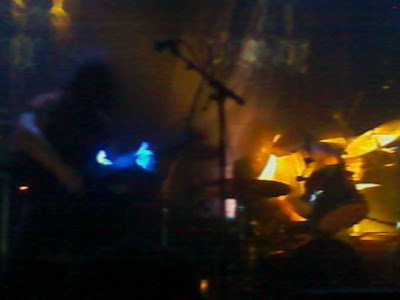 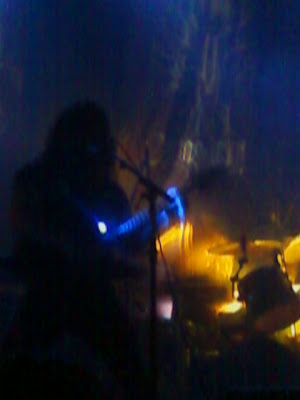 Bad cellphone pics by me - Ahna at top, Wolves in the Throne Room below
Posted by Allan MacInnis at 12:48 AM