Glenn Erickson on The Hellstrom Chronicle, plus DVD releases 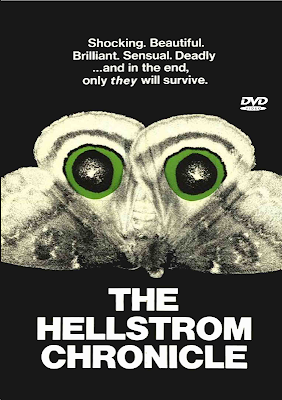 Just when there's nearly nowhere decent left to rent or even buy DVDs ('cept the Videomatica sale store in back of Zulu!), there are some great releases happening. Koji Wakamatsu's three hour and ten minute long epic about Japanese radicals, United Red Army, came out this week; I wrote about it here, mentioning its relationship to the horror film Kichiku Dai Enkai. Also Japan-wise, not too far in the future, Anchor Bay will finally issue a legit Battle Royale (hopefully the Fukasaku theatrical cut, which has a far more decisive ending than the Chinese bootlegs and Korean extended versions that circulate here), and Criterion will have Fassbinder's World on a Wire out... Alas, I have no time or energy to write about any of that right now. Except I just wrote Glenn Erickson about Ken Middleham and the amazing bug photography in the new legit release from Olive Films of The Hellstrom Chronicle, and he posted my email at the bottom of his (very able) review of that film, which is accurate enough that I don't need to say much more ('cept what I said in the email). So go read his review, 'specially if you like bugs, and continue considering my blog on hiatus...

PS. At least until I see it a few more times and have a chance to revise my opinion - which I am in no rush to do - I think I'm ranking Cronenberg's new film down there with my least favourite of his works. Bearing in mind that I'm not really that interested in the biographies of Freud or Jung or the history of pyschoanalysis or such - and thus perhaps not the film's ideal viewer - I have to say that I'd be more inclined to revisit M. Butterfly or Spider or Existenz or any of those other less-generally-loved Cronenberg titles twice before seeing A Dangerous Method again once. In brief:

1. Too many of the film's ideas are presented as mere lines of dialogue than fleshed-out, acted-out, embodied personal beliefs; for instance, we learn that Freud objects to Jung's interest in the supernatural and mysticism and such, and that this is central to the rupture between them, but the latter is never made real for us, never motivated, never shown at work, save as a topic of conversation between the characters (no scarabs knock at the window here). The same is true of Freud's over-focusing on sex - the film takes no risks in offering us glimpses into Freud's private life, to make his ideas an extension of his character; it's all just a matter of talk. Perhaps the prestige of these historical figures inhibited Cronenberg when it came to taking creative liberties with these men's biographies; if that's the case, one wishes he'd been braver.

2. Fassbender and Mortensen turn in surprisingly dull performances, with little expressive range or emotional force; this is particularly disappointing re: Fassbender, who was so good and Shame and is given quite a bit to work with. (Mortensen is doomed, meanwhile: the film is not really that interested in Freud, save as an influence on and occasional foil for Jung). Meantime, Vincent Cassell plays a much more interesting character (qua movie, not history) than either Freud or Jung, but barely gets ten minutes of screentime, appearing almost entirely as a function of the narrative, inserted in it only to motivate a particular choice on Jung's part, then quickly disappearing...

3. There is nowhere near enough sex, considering its importance to the story. When sex does surface, it's as a violent explosion of repressed energies, but these are very soon buried over again and made the stuff of conversation. All that may be appropriate - we are dealing with intellectuals in the early 20th century - but it still isn't the stuff of exciting cinema; again, perhaps the prestige of the story inhibited Cronenberg from really taking risks... (People with spanking fetishes might enjoy where he goes, though).

4.  The best moments in the film, by me - and here I stand far from the consensus - all revolve around Kiera Knightly, who makes the passions of Sabina Spielrein quite compelling (and whose "scenery chewing" not only seemed perfectly believable but reminded me of a young, rather violent woman I met once when volunteering at Riverview). I would have enjoyed the film far more if it jettisoned 70% of its Freud-Jung material and focused instead on her, if the film had ended up more of an overtly feminist biography; she ends up the emotional heart of the film, but - just as she is excluded from most histories of psychoanalysis - her story too often takes a backseat to those of Freud and Jung... It would have been interesting for Cronenberg, who has made some fairly misogynistic films (Rabid, The Brood) to really run with the idea of a feminist revisionist history, to make a film about how much more ALIVE Spielrein seems than either Freud or Jung. In fact, he very nearly does just that, but doesn't quite take it far enough...

Polanski's Carnage was much more enjoyable...
Posted by Allan MacInnis at 1:00 AM