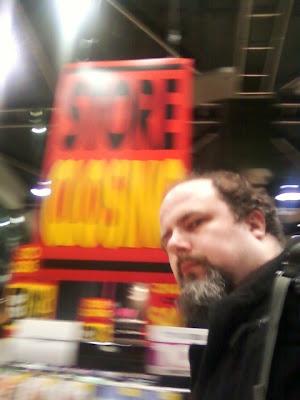 I took one final stroll through the HMV flagship store in the last half hour of its being open tonight. With the upper and lower floors empty and barricaded off, the discounts still negligible (10-20% off most items, aside from truly horrific bits of non-culture that no one wants, like $1 biographies of Fall Out Boy, or Madonna's Glee book, whatever the hell that is), and not much organization to the remaining stock, the main floor was still full of people milling about, searching for that elusive good deal right to the end (I'd snagged Morbid Angel's Heretic and a documentary about Nigerian exploitation cinema out of the $1.99 bin earlier today, but not much was left of that caliber even by mid-afternoon). Maybe we were just feeling some odd, undefinable need to bear witness, pay respects, be there when it died - since after all, this isn't just one bloated, mediocre chainstore location that's closing, it's a symptom of an ongoing paradigm shift that's going to have a profound impact on the way we consume media in the future (albeit possibly for the better). Maybe just maybe, too, we were there because, all appearances to the contrary, we felt like some part of our community was disappearing? Announcements counting down the minutes til closing made sure we understood what the real relationship of HMV to the community is, from their point of view, anyways - the guy on the mike kept telling us that it was a sad occasion, then unsubtly urging us to cheer ourselves up by buying something. Still, the sense lingers that something more than an opportunity to relocate our money from OUR pockets to THEIR pockets was being lost. Fucked if I can quite put my finger on it, though - HMV have always been better at conveying how important their model of business is to them than making connections with Vancouver culture or the real tastes and needs of their customers, so what their closure really means to the city isn't easy to see (Future Shop must be happy, though). Maybe we were just there hoping that something would happen in that last half hour that would prove that our having been customers at this particular store, having spent our time and money there over the years, wasn't, in fact, a completely meaningless thing in the end, as insignificant in human terms as whether one favours Pepsi or Coke... because if it doesn't mean anything to be present when something dies, what possible meaning could it have had when it was still alive?

In-between the touching announcements, meanwhile, we had music: Simple Minds' "Don't You Forget About Me" was in heavy rotation, obviously  programmed to tap into an easily commodified form of nostalgia relevant to the target market HMV most caters to - middleclass whitefolk who were teens when that song (and The Breakfast Club) were current, who retain fondness for it, and now have (in theory) the purchasing power that comes with adulthood. (I'm sure that HMV have done market research to determine which songs correlate with the most purchases, and surely that one's way up there. Of course, that kind of manipulative, whorish cynicism and pandering does nothing but ruin cultural experiences for some of us - because as much as I loved The Breakfast Club and even that fucking song when I was 14 or so, hearing it now makes me want to reach for a shotgun - but then, one could never accuse HMV of over-estimating their customers' tastes). I confess that I actually felt a bizarre sort of misty-eyedness at the thought that I may never again have the particular displeasure of having songs like that (or Rick Astley's "Never Gonna Give You Up," say, also a HMV favourite featured in the last half hour) accompanying the experience of shopping for music or film; God knows Zulu/Videomatica won't be spinning shit like that anytime soon, or any of the other locations that sell music (or movies) to people who care and know about music (or movies)... The impossibility of imagining either of those songs over the speakers at Audiopile or Red Cat or Neptoon or so forth says something about how vastly Other the whole HMV experience is, how much MORE it is about the marketplace than culture... It got me thinking briefly what I would play to mark the occasion of the HMV flagship store's closure, if *I* were given free reign to DJ the night. I think I've come up with the perfect song - Tommy Makem and the Clancy Brothers doing "Isn't It Grand."

(No, seriously - there's no other last sentence to this piece, go check that song out for the conclusion).

RIP, HMV flagship store (now what the hell else is going to fill that space?).
Posted by Allan MacInnis at 12:56 AM

I miss the days of having Kellys, Phantasmagoria, A@B, A@A and all the many independent stores in Vancouver. I didn't have much money then, but I loved walking around and comparing prices. Oh, the joy of finding that 7 inch British release!

I'm pretty sure I once stumbled into Friends Hot Wax, or whatever it was called, and I shopped at Kelly's a couple of times as a kid - but most of those were sorta before my time. I've never even heard of Phantasmagoria! However, I regularly bought records and later CDs at A&A and Odyssey Imports when they were both on Granville, then, on Record Row, at Collectors RPM, Track Records, Odyssey Imports, Sam the Record Man, A&B, and... holy shit, I don't even remember what Dale's little store was called now... no, wait: Noize, that's it, or Noize to Go. There was a shop run by a guy named Al at Richards and Pender for awhile, too - roughly kitty corner from McLeod's. And of course, Albion Books used to have fairly interesting vinyl (the section seems neglected, these days). Odd how many of those stores are gone, but remain lodged in my memory... There are lots of places that are closed now, that I used to frequent - bookstores, restaurants, live music venues - but none quite stand out in the mind like the ghosts of record stores past...

That all takes me back, I use to work at Steintron Electronics Stereo shop on the corner across from MacDonalds on Granville, then dj'd at Circus Circus Show Lounge and Champagne Charlies from 1982-1993. I do fondly remember the various record shops a&m, a&b, Kelly's, Odyssey Imports, Sam The record Man etc...My other favorite haunts were the Brown Derby Restaurant, Minoya Japanese restaurant and the GRanville Book Company, even as I write this I'm filled with all the sights and sounds of those days gone by...