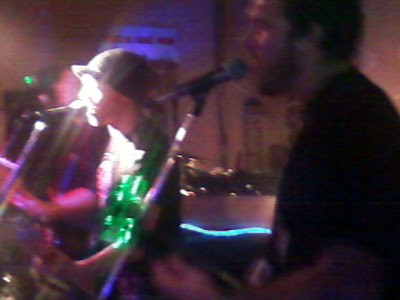 It's been hard to keep abreast of music in Maple Ridge. The Ridge Radicals Facebook page is one place, and every now and then something ends up listed on www.livevan.com; but I'm sure I've missed out on a few things, since I'm used to living in a town that allows gig posters (which are very, very rare here). Anyhow, turns out that for some time, the Wolf Bar (at 22336 Lougheed Highway, entrance in the alley below) has been having weekend shows, apparently with no cover charge and abundant cheap drinks. Tonight I finally made it there, where, to my surprise, I caught Paradosis - who, stripped to a trio, have refined their sound, honed their chops, and gotten much more confident. They played a great, proggily intense set tonight - lotta whooped cries of "Paradosis!" from the audience, and indeed even a bit of moshing. I've long felt that they're a young BC band to follow, and expect that they will eventually end up getting noticed; certainly the crowd at the Wolf were enthusiastic. Their set was followed by a long DJ set of bar music, beginning with Rob Zombie commanding the crowd to "dance motherfucker," which was sufficient, invitation-wise, for a dozen or so girls in the bar, most of whom just danced sexily with each other (though there were a few solo men trying their moves out, as well). I was particularly taken with a cleavage-heavy bespectacled girl who briefly got up on a speaker cabinet to shake her thing, her boobs rolling half-out of her top like ill-packed watermelons; if she hadn't been 25ish (because who wants to feel like an old pervert?) I probably would have tried to awkwardly drool on her a bit. With a spastic green laser drawing squiggily lines everywhere and a Paralyzer and three rum-cokes in me, to say nothing of the rum-eggnogs I'd had at home before heading out, it was entertaining enough to sit back and just watch people have more fun than me, though the overall bar-music theme during the interlude eventually wore me down. Feeling drunk, hungry, and a bit weary, I ducked out on Multiple Partners - a newish Vancouver punk band with obvious enthusiasm for the form - though I snagged their demo EP to check out at my leisure (song titles: "Lose the Safety Net," "Go West Young Man," and "Tough Pill to Swallow"). And for the billionth time I missed seeing the Bone Daddies - a local band whom I've had a ridiculously large number of chances to see at this point. Sorry, Bone Daddies!

Interested parties should check out the Wolf listings on Livevan - it's a small space, and the ambience by day isn't too far from Funkys*, but by night on the weekends it seems like a place I want to return... 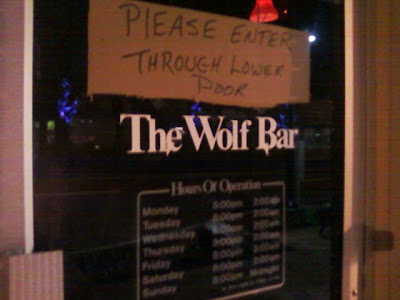 *Funky's by day, that is. Not that I've actually BEEN to Funky's by day, mind you, but I've seen the regulars hanging out there before the music starts at night, and that's been more than enough for me. My brief venture into the Wolf by day, meanwhile, had me glowered at and appraised by two very scary lookin' women in their 40's with tanned leather faces and very tight jeans... just as well that I'm not much of an afternoon drinker...
Posted by Allan MacInnis at 1:34 AM

Awesome revue, thanks! Hi, I'm Dee and I'm the FB Marketing Manager for The Wolf Bar. If anyone is interested in what's happening, check out our Facebook page and subscribe to the Events.


LOL Except The Wolf isn't open during the day. And if you were there at 7pm, GOOD chance it was me and my best friend who eyeballed you. I promise we don't bite... or hit on people, roflmao. We were likely there to catch up on our week and having a heated conversation. If you come back, please say hi and tell the bartender that you wrote this blog! I'll be sure to mention it to him.