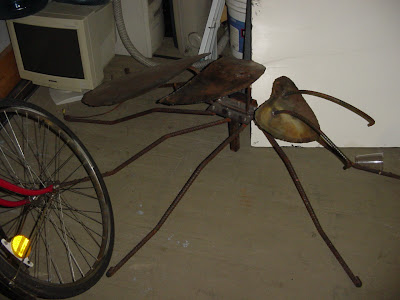 Going to 1067 was always an interesting experience: negotiating the herds of the entertainment zone, finding the back alley entrance, making your way through the disused office space (sometimes with odd art projects to negotiate, as above) to see improvised and avant-garde music somehow always felt more covert, more daring, more subversive than going to an East Van punk or metal show, however dilapidated THOSE spaces might have been, mostly due to 1067's proximity to the mainstream. It didn't hurt that the sounds one hears there usually take you far further OUTSIDE any definition of the mainstream you might encounter. I haven't gone there at all since circumstances brought me back to Maple Ridge; and after this Sunday, it looks like I'm never going to go there again, because the performance space is being SHUT DOWN, finally, after bucking the odds for a pretty healthy stretch of time (and even surviving the fucking Olympics!). Sad news, tho' - because in a matter of days, the space will be as dead as the Red Gate, dead as the Emergency Room - just another useless hull for mice to run around in, as if the city didn't have enough of those already.

Anyhow, people who care about the venue, improvised music, or the state of our city's creative music community are invited to a final night of reminiscing - a celebratory wake of some sort - this Sunday (the 18th) at 8pm. I wish I could say I'd be there, but I'm badly in need of a stamina transfusion, before I can make any such plans; right now, leaving the apartment sounds ambitious.
Posted by Allan MacInnis at 11:53 PM