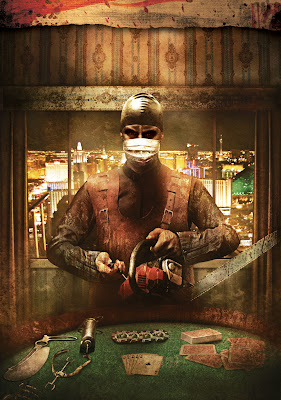 With next-to-nowhere to rent videos these days and a concomitant decline in the number of "previously viewed" DVDs to be found on the cheap, I made the mistake, based on my admiration for the first two Hostel films and my immense curiosity to see what could be done by relocating the franchise to Vegas, to buy Hostel Part III, now out as a direct-to-DVD release, priced around $25 (even after a Boxing Day discount), and made, apparently, without a smidgen of involvement from Eli Roth. Profit, horror fans, from my mistake: paying more than $3 for this film (if you pay anything at all), however much you like the previous Hostel films, will leave you feeling ripped off and disappointed with yourself. While for some of you it will come as no great revelation that this is a pretty bad film, and while I admit that it really isn't worth writing about at all, I cannot but set down a few reactions, to purge them from my system:
1. The film has no intelligent or coherent statements to make about violence, exploitation, torture, global capitalism, Abu Ghraib, ugly Americanism, or any other themes that can be teased out from the first two Hostel films. It offers, instead, yet another variation on the tried-and-true motif of the Vegas-bachelor-party-gone-awry (both Very Bad Things and even The Hangover are better films, and perhaps even scarier). To the extent that it has a coherent theme, it appears to be that Vegas is evil - an observation that is written into the screenplay with considerable didacticism. If it has anything beyond that to say, it gets obscured by the various too-clever attempts to subvert, augment, or copy wholesale elements from the previous Hostel films; and even that statement - "Vegas is evil" - is made without much force or conviction, because -

2. The film does nothing to evoke Vegas, despite apparently being shot on location. Exterior shots are uninspired and perfunctory, and the film shows no real interest in either the myths or the realities of the place, while interior shots are obviously and badly staged. Presumably no actual casino wanted to be associated with this film (or else the budget simply wasn't there for much location shooting), so card tables and slot machines are plunked in shabbily-furnished sets that look more like empty gymnasiums than glitzy palaces of vice; the casino my Mom and I gamble at in Maple Ridge is more glamourous (and feels more like Vegas) than the ones assembled here. The psychology of gambling is equally not evoked in the film; the one brief casino visit and the presence of a wealthy audience placing bets on how the tortures play out - a clever and Vegas-appropriate twist the film offers on the way things are done, but poorly explained and not engaged with in detail - are not enough to make this film feel Vegas-specific or interested in gambling. While Roth was equally not very interested in the realities of Europe or Slovakia or such, with Hostel 3, we're looking at an American city that EVERYONE has seen, at least in dozens of films, and has some feelings about; to fail so completely to evoke the excitement or the glamour of Vegas, even for the purposes of subverting it, is to waste an entertaining premise.

3. Waste occurs on a thematic level, too, as the film misunderstands its own greatest potential. By relocating the action of the film to Vegas, the film COULD have squarely placed responsibility for the human exploitation, torture, and violence it depicts on American shoulders, rather than comfortably displacing it on cardboard-cut-out pseudo-Slovakians (which is arguably what Roth does; while his films do engage with the aftershocks of Abu Ghraib, it still must be said that it's problematic, in the immediate wake of that scandal, to depict Americans as the VICTIMS of torture, not its perpetrator). It teases us that it will do exactly this, in fact - blame America - with an opening set-up, echoing certain scenes in the first film, wherein a young American enters a hostel room where two attractive Eastern Europeans are in a state of semi-undress; of course - because it is far more likely that the film will invoke its forbear for the purposes of a twist than it is that it will borrow a scene whole - it develops that it's the American, not the Eastern Europeans, that is to be feared. In a feat of amazing lameness, however, midway through the film, the filmmakers cop out, wreck this at least somewhat interesting development, and decide that it's more important to be pointlessly, meaninglessly, literally faithful to the previous two films by having a European - played by Thomas Kretschmann - in charge of the American branch of Elite Hunting than it is to stake new territory or even remain thematically consistent with their semi-inspired beginning. Besides, Americans never torture people, nooo...

4. The film consistently provides details about how Elite Hunting runs its Vegas operation that function not to illuminate or lend reality or nuance to the way the business is run (as is done delightfully throughout Hostel II), but to set up plot elements for later in the film: the fact that the bloodhound tattoos become scanned as a sort of ID sets up (and telegraphs) a scene where one of the good guys cuts off a tattoo from a corpse to use as a sort of ID card; the fact that the building is set to blow up if the operation is compromised is there not because it seems plausible that this is something an organization that might want to keep a low profile would do, but to justify having a Real Big Explosion at the film's climax; the weird fact that the Eastern European guy, kidnapped at the beginning of the film, is kept alive while later abductees are killed is not because there are special plans for him or reasons within the world of the film not to kill him, but because the film wants someone to tell the American characters that they're fucked, when they find themselves in adjoining cages, and so forth. The stripped-down elegance of the storytelling in the first two Hostel films is made far more visible by contrast with how clunky this installment is.

5. While for the most part the film flinches from its gore, there are exactly two amusing, inventive torture scenes that must be mentioned. The first and bloodiest demonstrates that in addition to the first two Hostel films, the filmmakers have seen Eyes Without A Face; and the second, that they have a familiarity with Fear Factor - particularly the oft-used ordeal-by-insect. (The cockroaches in Hostel Part III appear to be of the same South American sort that Bradford Dillman vies against in Bug!, minus the compelling insect photography of Ken Middleham). This sequence contains the one truly inspired, buy-someone-a-beer-for-coming-up-with-it moment that the film offers, a delightfully, absurdly placed camera lending to an implausible but revoltingly effective gross-out, almost sick enough to trigger a physical gag reflex. It's not enough, but it has to be acknowledged.

However, even here, the film serves mostly to show by negative example just how well-thought-out Eli Roth's previous two films are. Both of those films make their characters' deaths count, and reserve their worst tortures for the most vulnerable of them - Josh in part one, whom Roth deliberately misleads us to think is his protagonist, and Lorna in part two, whose death we anticipate and are thus made complicit in, which only makes the extreme violence of it that much more upsetting. Hostel Part III, meanwhile, reserves the worst tortures (above) for the characters we like least; the character we like most, the Vegas-naysayer Justin, played by John Hensley, who upstages the rest of the cast in both his conviction and his charisma, and is the character we most want to see fight back, is coldly and quickly dispatched with a crossbow, whose bolts find their mark offscreen. This occurs as part of a highly stagey, emotion-free confrontation with someone described as a "Japanese cyberpunk," who seems more like a monster out of Pan's Labyrinth than a human being; the scene that should have been the most upsetting of all in the film instead plays out in the muted tones of anticlimax, with our emotional investment in Justin completely squandered.

There are other disappoinments. Hostel Part III has none of Eli Roth's skill with locations or mood; the building where the torture takes place is boring and charmless, compared to the dilapidated industrial locations of the first two films. A potentially memorable downer ending is spoiled by a too obvious, too pat happy-ending turnabout (you'll be thinking "I hope they don't--" long before they do). And the main conflict in the film reduces the complexities of the first two - which DO open onto global and political arguments - to two guys fighting over a woman, a trivial, meaning free macho contest. Pffft.

Man, the death of video rental stores is really going to suck...
Posted by Allan MacInnis at 1:34 PM