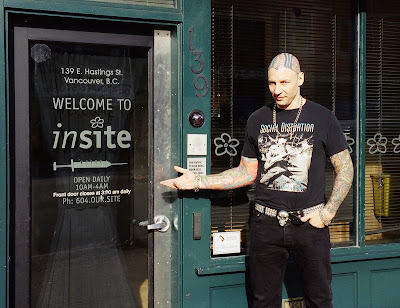 So suddenly I see that Vancouver punk novelist Chris Walter has been added to the lineup for the show Saturday. I fired off a few email questions for Chris, since I've been a bit out of the GFY loop, out here in the suburbs.

What will you be doing at the show?

The title for my new book is a play on words describing both the most popular hard drugs on the DTES and the rise and fall of two opposing drug lords on which the story is based.

Any plans for the future?

In 2012, if all goes well, GFY Press will be launching a biographical book about Canadian rock venues entitled Dive Bars: Rock & Roll Venues From A to Z.

What pisses you off, lately?

The idea that Stephen Harper could get a majority government not only pisses me off, it fill me with terror. Stevie is a very bad man and I do not wish to see what he will do if given total access to the public coffers.

I am happy to spend my days writing rather than working my ass off on some damp construction site or languishing on the welfare rolls. Of all possible scenarios, my life today is much better than I deserve.

And finally, what are you listening to?
I’m listening to the same old punk noise I listened to 30 years ago, with some new Motorhead, The Rebel Spell, Richard Duguay, and Street Dogs thrown into the mix.

Seeya at the show. 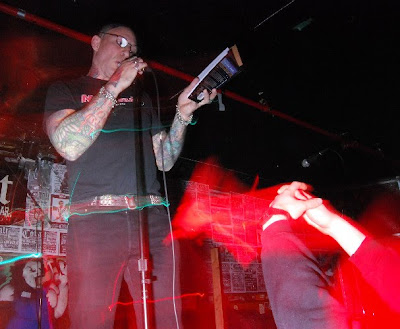 Chris Walter reading at the Cobalt, photo by Femke van Delft, not to be reused without permission
Posted by Allan MacInnis at 11:06 AM