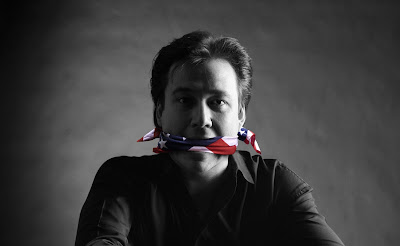 There's a new documentary about American comedian Bill Hicks, American: The Bill Hicks Story, screening in early May at the Vancity Theatre. I've long been an admirer of Hicks - though a conflicted one; Hicks had a deep darkness to his material, with performances that occasionally revealed an undisguised hostility toward his audience and a contempt for his parents and countrymen, which perhaps helped fuel his drug and alcohol problems, his smoking, and even his very early death, of cancer, at age 32. I don't mind angry comedy (and also enjoy the later routines of George Carlin, whose late-period rage may well have been inspired by Hicks - see the two of them talk about each other, here); but occasionally the sense creeps in that there's something very much wrong with Hicks, some untrustworthy personal demon that taints the medicine he offers. There was, however, also a fearless honesty to him, and a sobering rage against mediocrity, anti-intellectualism, Christian intolerance, and advertising, that made him briefly perhaps the most provocative comedian in America; and at least some of his rage does ones heart good to hear. I've just previewed the film, and didn't mind it, while not finding it wholly satisfying.
In the documentary, the story of Hicks is told almost exclusively through interviews, as the film's website describes, with "the 10 people who knew him best:" his mother, siblings, lifelong friends, and fellow stand up comedians who worked with him from his start, in Texas, as a teenager. This allows for a fair bit of intimacy, and I certainly did learn things about Hicks that I did not know, particularly about the arc of his career and early performances. On the other hand, friends, family and colleagues generally have a tendency to idealize the deceased, and questions that could have been raised about Hicks are left aside - about the depth of his hatreds, about the source of his apparent self-destructive streak, or even about how people who he targeted, like Jay Leno, felt about it (by the way, that routine continues with Hicks cruelling mocking Leno, imitating him eating Doritos then, in a fit of conscience, blowing out his brains, saying "I used to be funny;" it's one of the nastiest things I've ever seen a comic do, especially to a former friend, but no mention is made of it - nor of his accusasations that Denis Leary plagiarised him, for that matter). All his really nasty moments, in fact - like his repeatedly calling that heckler a "drunk cunt," or such - are left out, as are his more intense comments about advertisers and marketers "sucking Satan's cock" (which Hicks would often illustrate with rather gross sound effects, shoving the microphone in his mouth; we see the lead up to that moment, where Hicks is instructing advertisers to just kill themselves, but don't get anywhere near the climactic rant). Perhaps I'm too demanding, but it seems to me that a documentary about a stand-up comedian should be at least AS brave as that comedian, if not moreso. It perhaps should also draw at least a bit on interviews with the subject, even if he's deceased - since Hicks did his share, in life; the choice to stick to the perspective of Hicks' friends and family seems to have been motivated more by matters of convenience and, potentially, expense than because it allows for the most thorough portrait of the man. Hicks' own thoughts (aside from those presented in clips from his performances) are not the only ones I found myself missing, either. In particular, I would have liked to hear more about his relationship with the band Tool, for example, whose most memorable song is inspired by a Bill Hicks routine; it shows that at least some of Hicks' anger was ratified in America and had an impact, as opposed to the general picture of neglect-in-his-home-country that the film paints. Reference, too, is made to the censored Letterman routine that upset Hicks so much towards the end of his life, but no footage is shown of it, even tho' it can be widely seen on Youtube. Generally, one has to make do with Hicks' friends and family talking about how great he was, without ever really being given vivid examples of it in the footage of Hicks shown...
On the whole, I suspect people who know Hicks well will find American: The Bill Hicks Story rather underwhelming, while those who don't know him might be better off just picking up a DVD of Hicks' performing, if they want an introduction to his work. Since presumably no other biographical documentary about Bill Hicks is in the works, it's somewhat unfortunate that this one isn't a bit better - that it wasn't a bit more passionately made, a bit more provocative, a bit more searching. Still, if you're a fan of Hicks, you should probably check it out. Lower your expectations accordingly, and you may even enjoy it more than I did - there WAS footage of Hicks that I'd never seen before, and I've watched quite a bit of it, so that's one good reason to check it out.
Posted by Allan MacInnis at 10:41 PM