You Don't Like the Truth: essential doc on Khadr case 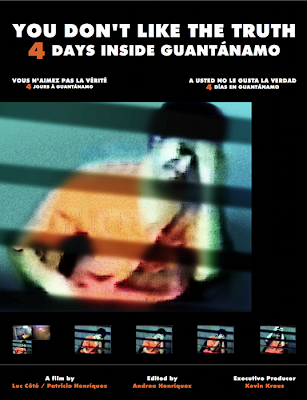 This Tuesday, at 7PM, in the Woodward's complex, an absolutely essential piece of cinema is going to play in Vancouver, courtesy of Doxa.
Everyone in this country who votes, everyone who values human rights, anyone who is concerned about the direction that Canada is heading, or who simply values being informed about world events, owes it to him or herself to be educated on the case of Omar Khadr. A 15-year old child soldier and Canadian citizen arrested during a US assault on a compound in Afghanistan in 2002 - I'd mistakenly said it was his family's compound in a previous post - Khadr has been in US detention at Bagram and at Guantanamo Bay since that time, for a period totalling eight years. He claims he has been subject to torture, and this seems highly likely, with witnesses having seen him in stress positions and ample evidence that torture has occured around him. He has certainly been interrogated at great length while being deprived of due process. The Canadian government has not acted in his defense, despite many cries for them to do so, including a Federal Court decision that Khadr's rights have been violated and that it is our country's duty to protect him. Even though a child at the time of his arrest, whose actions were part of a combat situation, Khadr has been accused of war crimes, at one point even being possibly eligible for the death penalty. His main crime - which he has plead guilty to, but which there is apparently some good reason to believe he could not possibly have committed - was killing a US soldier. (See this New York Times editorial for more on that; there is also a past Toronto Star article that is mentioned in the film I am about to review, but I don't have a link to it at the moment; it shows photos that apparently prove that Khadr, at the time the grenade that killed Christopher Speer was thrown, was lying under rubble, riddled with shrapnel, with various bullet holes in him, near death; the headline of the article is a non-ambiguous assertion that Omar could not have thrown the grenade). 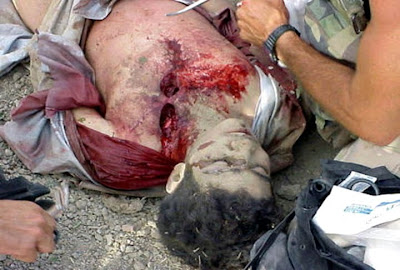 The film about Khadr in question is called You Don't Like The Truth. I am unaware of any single document as significant or as compelling as a means by which one might educate oneself about the Khadr case. It is an astonishing documentary, very well-made and intelligent, far eclipsing, for example, Errol Morris' film Standard Operating Procedure in its bravery, educational value, and impact.
The film has a very simple structure. It is based on seven hours of publicly released video footage of Khadr's interrogation at the hands of visiting CSIS agents, taken over a period of a few days. The video quality is variable. All faces but Khadr's are obscured. He sits in his orange jumpsuit, answering questions - or avoiding them, or, for a great length of time, sobbing uncontrollably and calling for his mother.
This raw footage is not all the filmmakers have to offer, however. Again, they make very simple and straightforward choices for assembling their film - except they are the RIGHT choices, choices that were NECESSARY, which far too few people in the media have made in recent years. They interview Khadr's lawyers, American and Canadian. They interview Khadr's sister and mother. They interview a half-dozen cellmates from Bagram and Guantanamo - now released, and in some cases galvanized towards activism. Some, like Moazzam Begg, are controversial figures - something not dealt with in the documentary - but all are highly articulate and intelligent. All are shown the footage of Khadr and allowed to comment, often in split-screen constructions as we continue to watch Khadr; all are unanimous in the picture they paint. 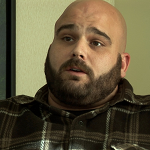 Perhaps the most inspired choice of interview subject is a former US army interrogator named Damien Corsetti. Corsetti, soft-spoken and intelligent and apparently capable of considerable brutality, was at Bagram and at Abu Ghraib, where some of the worst abuses of the "war on terror" are said to have occured. Though found not guilty in the ensuing investigations, in the film, Corsetti is quite open about having been party to horrible offenses against human dignity, something that continues to weigh on his conscience; his nickname, "the King of Torture," appears to have been well-earned. "I did some very bad things," he says in the film. "I have to own it." And yet even he - a man with the word "monster" tattooed in Italian across his chest - acknowledges that Khadr was a child at the time of his arrest and first detention, that he has been done a grievous wrong, and that his country has failed him. "Ultimately the blame now lies on the Canadian people," he continues, since "there have been elections in Canada since Omar was captured... I think the Canadian people need to look at themselves," and try to understand "how I, as a cold, callous sonofabitch, had more compassion for that boy than his own people. If they want to allow one of their own citizens to be treated like this, think of the precendent it sets. It could be you."
You Don't Like the Truth is, simply, an unmissable documentary - something every Canadian should see. It does need a bit of an updating - since the film was completed, Khadr has been tried and plead guilty to the killing of Speer, which may mean nothing at all, save that he is desperate to get out of Guantanamo Bay. By his current sentence, he is to spend one more year there, his ninth. Our country's chance to act may well have passed, but at least we can educate ourselves as to what we have been a party to.
(Edit: a very good Q&A update, with various scary "let him rot" comments, was posted by the CBC today...).
Screening information:
Tuesday November 30, 2010, 7:00pm
SFU Woodward's - 3rd Floor
149 West Hasting Street (enter via Courtyard)
See the Doxa website for more information.
Posted by Allan MacInnis at 12:55 AM

If you don't live near the city, it can be hard to get in to see good films. I love documentaries and I've dragged my friend off to see works on Waco and such. My useless protest-of-one of cancelling my cable (because of reality shows), means that I count on the kindness of strangers to post them at some point. Thanks for the input on this one.

Excellent review, Allan. I definitely want to see this film. I watched some of the CSIS footage on Youtube and was stunned.