A Woman Under the Influence at the Vancity Theatre 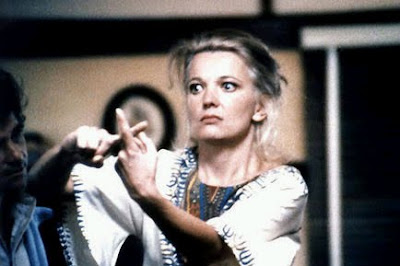 Any screenings of John Cassavetes' cinema are to be noted, but the Vancity Theatre showing on Wednesday, Nov. 24th of his A Woman Under the Influence is an ideal time for those NOT familiar with Cassavetes' canon, and hungry for emotionally intense, honest, and challenging film experiences, to begin their explorations. The film is widely hailed as Cassavetes' most fully realized and formally successful project; it certainly is the easiest entry point for those not previously baptised, the film least likely to be accused of self-indulgence, histrionics, or juvenile bad taste (which would, of course, be Husbands, my favourite of his films). Wednesday's screening, too, will be introduced by Vancity programmer Tom Charity, who wrote an excellent book on Cassavetes' life and films, John Cassavetes: Lifeworks. The film is a gruelling look at a working class family bordering on implosion: Nick, played by Peter Falk, while well-meaning, is too gruff and authoritarian for his own good, while his wife Mabel (Gena Rowlands, in what surely must be the most demanding performance of her long career) is highly sensitive, expressive, and emotionally volatile. Or is the word unstable? Highly recommended for anyone who plans to attend a large family dinner this holiday season, the film treads some harrowing territory, but is not without humour and warmth; it also features a terrific performance by John Cassavetes' own mother, Katherine Cassavetes, and a brief appearance by his father - also, perhaps significantly, a Nick - playing a character named (no kidding) Adolf. (He must have had a good sense of humour to do that...). The film is a must-see; if you haven't yet, now's the time....
Posted by Allan MacInnis at 5:14 PM