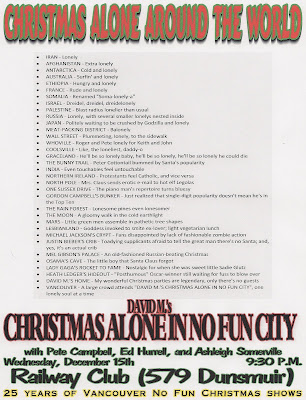 This blog likes David M., who, in the true Christmas spirit, began sending out gig posters for his upcoming Christmas-themed gig sometime in late October. (Do we know Loudon Wainwright III's song "Suddenly It's Christmas?" ("Suddenly it's Christmas/ right after Halloween/ forget about Thanksgiving/ It's just a buffet in-between... Dragging through the falling leaves in a one-horse open sleigh/ suddenly its Christmas/ seven weeks before the day." It is the funniest Christmas song NOT written by David M.) In the spirit of seasonal resistance, I have held back on posting said posters until we came a bit closer to the day (December 15th at the venerable Railway Club). More will be forthcoming! Merry Christmas!

(Already the malls of Maple Ridge are getting crowded...).
Posted by Allan MacInnis at 7:02 AM