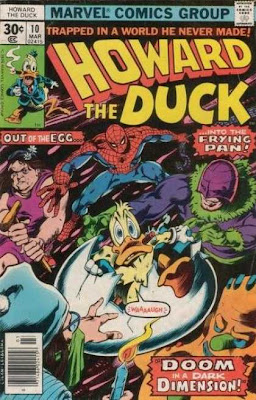 I've twice in the last few months gone into comic shops, trying to scratch a stubborn itch.
I have a vivid memory from my childhood of reading a comic book. I believe it was Howard the Duck - I was a fan of the original Steve Gerber series, as a kid, and retain some fondness for it now.
Perhaps I'm getting my comic books confused, but, likely somewhere during or adjacent to the "Quack-Up" period of Howard's - a storyline spanning several issues, where he is institutionalized and ends up (rather famously) seeing Kiss exorcised from a young woman - I vividly recall an episode along the following lines.
Howard is in a somewhat damaged state, wandering an institution, trying, dazedly, to get free.
He finds a doctor, explains that he wants to leave, and asks if the doctor has the key.
The doctor says he does, indeed, have "the key." He is somewhat mysterious about the nature of this key. He places something in Howard's mouth.
Howard begins to hallucinate in earnest.

I did not understand what I was reading, at the time. I was, perhaps, 11 or 12. I understood that the doctor had given Howard some sort of drug, but I had no idea what. I asked my father, and he was able to identify - from seeing him on TV - the doctor as being one Timothy Leary. My father, never a drug user, then had to explain to me about LSD; I believe it was the first time I had heard of that drug - or of Leary.
Visits to two comic shops have failed to turn up this issue or to even verify that the episode happens somewhere. I have a Howard the Duck anthology - the "essential," not the complete - and can find it nowhere in there. The comics I have looked through - getting shop owners to indulge me in my quest - have not contained the above. One of the guys I asked was dismissive - he thinks so obvious a drug reference couldn't possibly have happened in a Marvel Comic, and that I must be in error, but this is a stubborn memory on my part. I can't let go of it. While I might, somehow, have the wrong comic - I don't think so, but it's possible, since I read a lot of different comics as a kid, including some underground ones - I know that I am remembering SOMETHING real, because of the nature of the memory; the conversation I had with my Dad came from SOMEWHERE. (Perhaps Howard the Duck #10? I haven't checked that one yet, I don't think).
Can anyone help? Am I nuts? Is there a Howard the Duck completist out there who can peruse his or her collection on my behalf and verify for once and for all that the above does or does not happen? Did Howard encounter Timothy Leary in an issue? Which issue?
Help!
Posted by Allan MacInnis at 1:18 AM

I'm not sure about Timothy Leary, but I remember the Kiss episodes also. A quick google check shows that Kiss appeared in Howard the Duck issues 12 and 13. You can see a preview here:
http://marvel.com/digitalcomics/view.htm?iid=11060

It's worse than that, Will - I've LOOKED through every issue that I thought it might be in (except maybe number 10). It ain't to be found. But I'll take a look at this Marvel preview stuff... thanks!