Al Needs a Date to Experimental Music show at Nyala 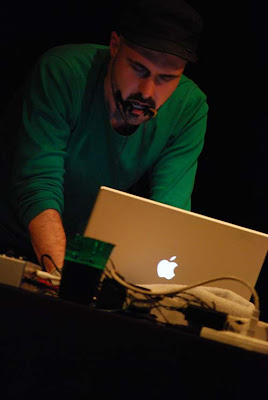 Ejaculation Death Rattle's Ross Birdwise, by Femke van Delft, not to be reused without permission

Right, so... a bunch of bands are playing at Nyala, the Ethiopian restaurant, on November 18th. I need a date!
Ejaculation Death Rattle (whose music I apparently once described as "earthy ecstatic deathtrips... kinda like lyin' back naked in a bed of moss as serpents crawl on your flesh" - play with alt-country singer turned avant garde vocal improviser Soressa Gardner. Lee Hutzulak will be there with guests. Yellowthief, whom EDR's lizard-in-chief Ross Birdwise has described as "Lightning Bolt meets Slayer meets Slint," will perform; I don't know my Lightning Bolt or Slint, but do either owe a debt to John Zorn's Naked City, or perhaps Ruins? Not being half as current as Ross, they're the best I'd be able to do. (But I second the Slayer reference). Finally, there's a band I know nothing about, Nervous Operator.
Successful applicants for the role of date should:
- Have at least some fondness for horror and cult movies, as well as arthouse cinema
- Have at least some fondness for spicy food, esp. curries, since it's all I cook at all well
- Have little use for tobacco, television, professional sports, or real estate
- Be actually interested in some of the above music
- Have some interest in attending occasional punk and metal shows
Pretty much anything else, I've found, is negotiable. You should not mind that I don't have a car, a savings account, a condo, or a firm physique. It would really really help me if you were impressed by stuff like my mini-collection of Ultraman monsters, my European bootleg DVD of the Canadian exploitation classic Rituals (which seems like it will never, alas, be released by Code Red, who are talking about going out of business soonish and whose blog is now ofline), and/or my Nihilist Spasm Band box set, signed by all the members of the band. (Just don't try to steal them).
Contact me via this blog! (Find the "contact" button somewhere....).
The show starts at 8.
Posted by Allan MacInnis at 11:40 PM

I suppose I should be grateful that several possibilities occur to me as to who might have left that last message... so, uh, thanks!

I have always liked the construction of the word "anonymous." Especially the Y.

Thus: you have a very sexy Y.