This is the way the world ends: not with a buzz, but a ringtone 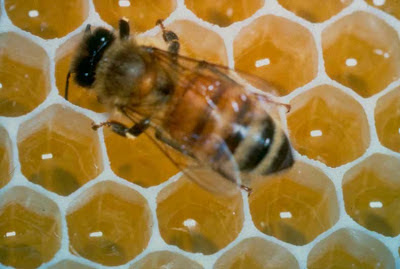 Aka, Bee afraid, bee very afraid...
One sees more and more panicked articles from people out there attuned to the possibility of ecological disaster, mostly involving global warming, but I personally am more afraid of the rapid decline in bee populations in the US and in Europe and what this could mean for our food supply. There was an article of a rather paranoid variety on Prison Planet - which appears to be a politicized conspiracy theory site about whose reputability I have some questions - postulating a weakened resistance to parasites caused by GM food as the cause of the decline, but more plausible, to me - perhaps because it fits nicely with a pet peeve of mine - is the likelihood that radiation from cellphones is behind the mass abandoning of hives. (That's an article from the Independent, too - a bit more of a reputable source than Prison Planet). Just as, back in the 1980s, the threat of nuclear war awakened in my teenage imagination fun fantasies of survival in a post-holocaust world, overrun with mutants and overgrown scorpions, the possibility of an ecological crisis involving bees and cell phones awakens a very pleasant fantasy of people being forced to turn in their cell phones en masse, with government agents going door to door collecting them, throwing them in buckets, perhaps melting them to get at the oil in the plastic. I'd be delighted! Not only would it nicely bring the first world down a notch, while leaving developing countries where not everyone has a friggin' cellphone more or less unscathed, it'd be a terrific blow against our narcissism, our vanity - a critical strike against our self-obsessed, techno-fetishistic, gadget-happy, endlessly jabbering ways. Never again would I have to listen to some dull mofo's banal "honey-what's-for-dinner" meandering while on the bus or a train; never again would I have to stand around on the sidewalk with my thumb inserted rectally while waiting for a friend to finish taking a call; and we could actually make it a crime for cellphones to go off in movie theatres or concert halls - or anywhere else! I loathe cell phones and live happily without one; I quite like bees; and I think we humans are badly in need of an object lessor or two from nature. Slogan for 2007, therefore: save the bees - rent a landline!
And to hell with cellphones!
Posted by Allan MacInnis at 4:18 PM

Haha, and here I was thinking about learning to write ring tones. The kids near me (in The Hague, Netherlands) all listen to pop tunes on their cell phones. Not with headphones, but playing out the tiny speakers. I guess bass isn't as important as it used to be.

I'd be surprised if pesticides weren't contributing to bee loss, but I don't know.

Ah, the Netherlands. I hope this means you go see The Ex a few times a year.