Michael Ondaatje Presents The Hustler, by Robert Rossen, May 1st 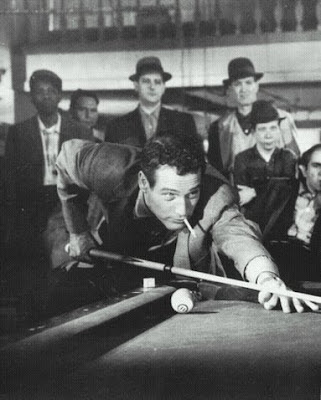 Sorry, Kat, you're getting bumped down one! The Vancity Theatre has put up its listings for May! There's one event that is absolutely essential viewing - I've already snarfed up a bunch of tickets online, and recommend y'all do the same, for on May 1st, Michael Ontaatje will be introducting The Hustler, Robert Rossen's 1961 film about a young, ambitious pool hustler (Paul Newman) determined to beat the unbeatable Minnesota Fats (Jackie Gleason). This is a long-standing favourite of mine - a film I revisit every couple of years. A friend of mine was pretty skeptical when I lent him the DVD: "It's about POOL, ferchrissakes - what's he gonna recommend next, Hoosiers?" Then he watched the film, and like all the friends with whom I've shared it, he was sold. The characters are so richly drawn and human that they're fascinating, and their interrelations, while completely convincing and grounded in the particular, verge on the archetypal -- particularly those between Newman and his corrupt "manager," George C. Scott ("you owe me money, Eddie!"), and his despairing, alcoholic girlfriend (Piper Laurie, giving a hell of a performance - one of my favourite female characters in film, actually). Most of what makes the film great is due to Walter Tevis' fine, fine novel (and it's unfortunate to note that - if I've got this right - the author got royally screwed on the adaptation), but Rossen has still managed to make a hell of a good film here. I'll be very interested to see what Michael Ondaatje, introducing the film for the May 1st screening, has to say about the relationship between the written and filmed texts, since I know he's a fan of Tevis' writing (I have an enthusiastic blurb from him on the cover of Tevis' chess novel, The Queen's Gambit). This is THE event for May (though I'm pleased to see David Lynch's Inland Empire will be making its way onto the VIFC's screen, too). Oh, and it looks like there'll be a new Guy Maddin film to screen!
I know too little about Czech New Wave films and the work of Robert LePage to enthuse just yet, but I'll keep you posted. It ain't Clint Eastwood, anyhow...!
Posted by Allan MacInnis at 6:04 PM