Bob Ostertag on Copyright, the Music Industry, and the Corporate Ownership of Culture 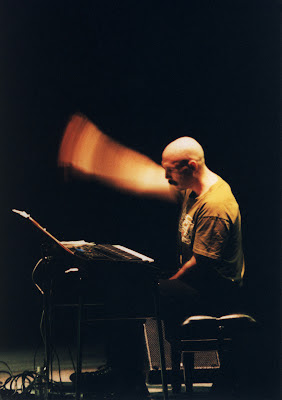 Gotta bring you all up to speed, provide some context: Bob Ostertag is an electronic musician, activist, and is affiliated with The Yes Men, the subject of a rather interesting documentary a few years ago (tho' to my recollection Ostertag does not appear therein, except in the credits). To the left, you see an image of an early "instrument" of his, composed of three tape machines

and various helium balloons - it seems to speak volumes about the nature of his music. He has collaborated with musicians like Fred Frith and John Zorn, and his work bears some resemblance to that of Canadian Plunderphonics guy John Oswald (tho' he tends to manipulate live sounds performed by musicians or toys, rather than pop-culture samples), and he shares with Oswald a connection to Negativland (that band who got sued and otherwise badly treated for daring to mock U2 and Casey Kasem, sampling both without permission, in rather unflattering ways - see their "surprise interview with the Edge about that, here, in this great archive of copyright-related issues). Ostertag, Oswald, and Negativland are all artists who are concerned with the way copyright laws affect musicians and cultural producers, giving corporations power over our ability to comment on the culture around us; they are on the side of the pirates (as opposed to independent artists like David Thomas of Pere Ubu, and Gerry Hannah of the Subhumans, who feel like artists are being screwed over and deprived of an income by illegal downloading and such; certainly in the latter case, I sympathize - from various bootlegs of their recordings to Overkill's theft of Hannah's "Fuck You," the Subhumans have to be one of the most fucked-over bands in punk history).

On a more personal level - to get back to Bob - Mr. Ostertag has in his possession a Japanese windup toy that I mailed him for use in his performances - which often involve the manipulated sounds of such toys; and I have on my wall four framed "cartoons" that were used as cels for a live animation/electronic music project for a performance a few years ago at the Western Front that he did with artist Pierre Hebert - a performance similar to that on the Between Science and Garbage DVD, if anyone is intrigued; Hebert's animation was a live composite of quick drawings he did on standard 81/2X11 paper, layered with distorted images of the toys and such that Ostertag was using as sound sources (see below). The drawings - often images of the 9/11 attacks and the subsequent wars - were chucked out into the audience as the performance progressed for us to salvage; afterwards, Hebert, inviting us to rummage, joked - as Ostertag shook his head, sadly, "no" - that they would be worth money some day. Ostertag's work is consistently playful, weird, and intellectually stimulating; he's an intelligent, articulate, and thought-provoking guy, and I quite dig what he does. 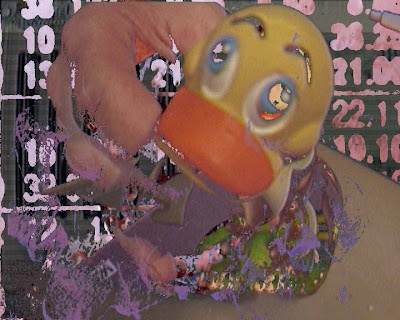 Say what you will about his views on copyright, but Ostertag is willing to put his money where his mouth is: around a year ago, he decided to put all of his recorded works that he still had control over online, for free download. He figured that sales of his recordings had been so minimal throughout his career that it would be a net gain to just make his music AVAILABLE to people, so people would at least know who he was, invite him to perform, etc. He has just posted a fascinating, essential essay for anyone concerned about the use of the internet, copyright, corporate power, and about the free downloading of music - nicely titled "The Professional Suicide of a Recording Musician." He does not address whether he has been able to make more money as a musician by making his recordings available free; I have asked him a personal question or two to this effect, and I hope to report his answer here. The Gregg Karukas reply to his article is also worth reading - scroll down.

Oh, and if you're interested, you can download Ostertag's music here, for free -- and guilt-free, too, tho' you're also welcome to buy them!

Posted by Allan MacInnis at 4:28 PM

There's also quite a bit of discussion of Bob Ostertag's article here, including his reply...