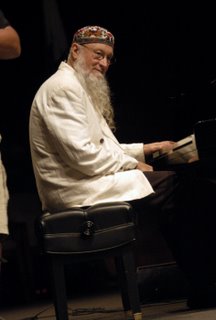 My interview with Terry Riley made it into the (mostly punk-focused) Nerve Magazine, which we hope will get more widely distributed around town than that last Terminal City was -- right now, you can only find it, that I've seen, in that CD store next to the pizza place by Charlie's on Granville. I won't be reprinting the interview here -- it feels kind of like cheating, and there's not much he said that didn't make it into the article. His concert on January 20th at the Chan Centre, with beat poet Michael McClure, promises to be a pretty cool event -- I highly encourage attendance! (Read the Nerve Magazine article for more info -- though the new issue is not online as I write this!). Also note the Chan's upcoming Kronos Quartet event...
Posted by Allan MacInnis at 12:14 AM