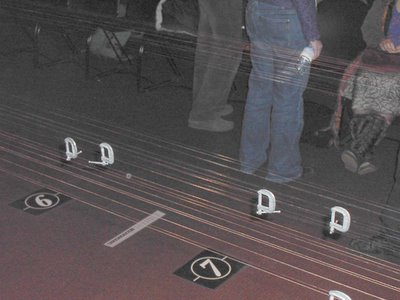 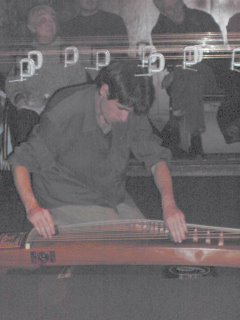 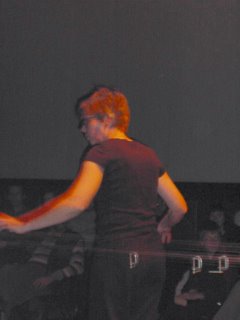 Some of the most exciting music I've heard lately was during the String Theory series at the Western Front (certainly my venue of choice for musical events this winter). Ellen Fullman's Long String Instrument was particularly a revelation; it's probably the most accessible and soothing music that could be described as drone -- the long, sustained, but complex and shifting tones have much in common with the more minimal works of La Monte Young and Tony Conrad, but are much more listener-friendly. It's music -- and I mean this as the highest of compliments -- that one could sleep to; in fact, it almost induces a sleeplike, dreamlike state, entering one's consciousness on a very deep level and grafting itself to the most vegetative of our processes (the term "deep media" seems particularly appropriate). Above we see photos of the LSI itself, which stretched the length of the venue, along with the numbers on the floor that serve as a guidepost for the player as she walks up and down between the sets of strings (it's designer and primary performer, Ellen Fullman, describes the experience of playing the LSI on her site as being "like walking in waist-high water, skimming the surface with my fingertips." This is the "travelling kit" version of the LSI, but her current studio version is in fact "slightly smaller.") Next we see Brett Larner playing one of the koto he brought from Japan, where he is based (see my interview with Brett below, for more; note the presence of Linda Hoffman of Vancouver New Music in the audience!); he accompanied Fullman, along with a Japanese friend on prepared koto, not pictured. Finally we see Ms. Fullman at work. She is now based in San Francisco. I e-mailed her with some questions after the gig.

How does it feel to play the LSI?

I sometimes concentrate to such a degree (when playing the LSI) that time
seems to stand still, it is an altered state, when things are working well. I
focus on technique, listening and making minute adjustments.

Does your music have a spiritual component?

I feel that as a performer, I am in the position of "transmitter" -- that is
that I feel my job is to bring out what is present in the sound production
of my instrument -- that what I am doing has some basis in universal
principles with a tradition.

Can she support herself with her music?

There is no comparision with arts funding in Canada and the US. It is a really a
do it yourself affair here I find for the most part. US artists rely on the
financial and moral support from other countries for survival. I have always had
day jobs.

I asked her about other musicians she likes and has collaborated with. She mentions Jim Tenney and Elianne Radique in particular. She will be performing in the Bay Area in 2006 with improvisers "hopefully including" Gino Robair, John Sherurba, Phil Gelb, Brenda Hutchinson, Krys Bobrowski, Pamela Z, Joe Colley, Kanoko Nishi, Tari Nelson Zagar and Jesse Canterberry, Luciano Chessa, Moe!, Sean Meehan, and Monique Buzzarte (of whom I believe I've only heard of Gelb, so don't be demoralized if the names are unfamiliar!). Another exciting series of collaborations which I highly recommend for anyone interested in minimal/drone music is Fullman's work with Pauline Oliveros and the Deep Listening Band, various items of which are listed here, though some seem to be out of stock.

I asked Ms. Fullman about Vancouver, and she commented that she loved playing here. "The audience was so focused, seems like a seriously vibrant scene. Playing at Western Front was like being in a living room, very intimate."

Of particular excitement to me was that Brett mentioned in my earlier interview with him that Ellen and he had played in trio with Haino Keiji (Keiji Haino, if you prefer). I'm a huge Haino Keiji fan and once saw him play a solo show in the tiny venue, Penguin House, in Koenji, Tokyo, which I actually have written about elsewhere. I asked both Ellen and Brett about the show. Ellen commented that Haino-san "was very sensitive -- we really were on the same wavelength," and added that she loves Japan. Brett, who has lived in Japan for much of his career and is currently fighting a cold in Tokyo, said that in "duo with Ellen he used cheap electronics and a million found percussion objects," but in trio he sang, with Brett pushing for greater intensity with "some of (his) hardest playing," which Ellen responded to and Haino greatly enjoyed. Brett adds:

I thought the trio encore at the WF was the other highlight of the show (along
with the song Kanoko and I did), so maybe Ellen and I will do a theme CD of
improvised trio encores with each other plus a Japanese musician. I wonder
how long it would take to get enough material together for that?

He notes that there is a recording of the performances with Haino, but there is no word as of yet as to whether that will be surfacing in any way that folks over here can get their hands on it. I'm currently pestering someone who might be able to help...

My (minimal computer noise improviser) friend Dan Kibke, in attendance at the gig, wondered aloud afterwards whether it gets to be limiting, having your work based primarily around one instrument for over 20 years. I asked Ellen Fullman about this -- did she feel the need to diversify? She responded that she is "still learning:"

In recent years I am delving into traditional instruments and standard notation,
string quartet, retuned Autoharp.

The LSI is such a rich source of sound that I can easily imagine devoting a lifetime to it, though, in the way that Indian classical musicians can devote their life to the sitar. I highly recommend that anyone interested in avant-garde music, minimalism, or drone explore the work of Ellen Fullman on CD (since it will probably be a long time until her next visit here.) Even my buddy Michael liked it, and he's usually not the avant-garde type, once having commented on the music that I listen to by saying it wasn't "musical experimentation" but "mental experimentation..." Mental experimentation of the highest order, I might add.

Thanks to Ellen Fullman and Brett Larner for participating in interviews, and to Norm Stelfox, fellow Western Front attendee, for e-mailing me some of the pictures he took of the performance when the batteries on my digital camera died... I guess I should thank DB Boyko of the Front for curating both this show and the Eugene Chadbourne concert! You made my winter!

At least I still have Terry Riley's show to look forward to...
Posted by Allan MacInnis at 1:49 PM