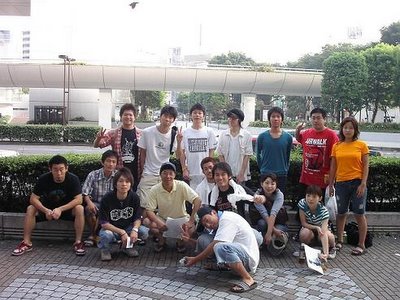 I spent three years in Japan and had several hundred students in the English classes I co-taught; the best by far -- the most gifted and ambitious -- was a young fellow named Jungo Higuchi. The school, in Saitama, a suburban district (with a fair number of small farms) just north of Tokyo, was called Okegawa Nishi Koko (Okenishi for short -- you can hear the school song here, if you wait a bit -- and do explore the site; there are pictures hidden around on it, some of which are of students and teachers from my time there...!), and it wasn't by far the best high school you could go to; many of the students were content to sleep through English lessons, or covertly send text messages on their keitai, or read manga hidden in their desks, as I struggled upstream with the crappy Monbusho-approved textbooks, learning more Japanese, in my attempts to explain grammar to the students, than they ever learned English off of me... Jungo, while not the only hard-working student in the school, certainly had the biggest taste for English, and he actually went so far as to pursue his studies outside the classroom, using self-study textbooks in combination with lessons broadcast on the radio. He regularly hung out with me for extra practice -- we sat at my desk in the teacher's room, or caught the occasional movie together. He introduced me to his parents, and his grandmother even knitted me a couple of sweaters (she was a sweet old woman who fussed and played a very nervous host on my one visit to her small home). Anyhow, Jungo, who now is a member of the workforce and thinking fondly back to aspects of his school days, dropped me a line to say hello recently and sent me a photo of his basketball team. I thought posting it would make a nice break from concerts and movies and politics, the usual fare on my blog... Jungo is standing in back, second from the left, with a white t-shirt on and a black strap on his shoulder... Looks like they're in the former Omiya, now incorporated into Saitama-shi. It's not quite Shinjuku but, since it was a fair bit closer, I spent many an afternoon hanging out there, trying to figure out the Japanese alphabetization of CDs at the Nack 5 Town, drinking in the red-light district at a place called Kind House back when it had the cool Easter Island motifs, trying different restaurants, and amusing myself watching the kids who hung out around the station with acoustic guitars, hoping to be discovered... It was all pretty interesting. The Sogo Department store had a mechanical clock that would open up at certain times, displaying dancing figurines and playing "It's a Small World After All..." Odd to have places like this, maybe not even remotely the same, stuck in my brain. I could still probably find my way around... I'd love to go back for a visit. Anyhow, Higuchi-san, shashin ga arigatou gozaimasu!
Posted by Allan MacInnis at 12:27 AM