Weird dreams of John Lurie, plus The Invention of Animals

So I'm sleeping with a "boil and bite" Night Guard in my mouth now - a plasticky bit that  you boil to soften and clamp onto your teeth, pressing down so that when it emerges and cools, you have a form-fitted barrier to grinding. Nevermind that I'm not even sure I need it - it's a weird thing to try to get used to. The other night I dreamed I had pills in my mouth and took a glass of water to try to swallow them, only it was my Night Guard I was trying to swallow. Luckily, this is not so easy to do. Last night at some point I bit down hard on it and jammed the hard plastic underside into my sensitive area, causing a burst of pain, which also woke me up. I feel really tired this morning - though whether that's down to my Night Guard, a too-short sleep, or the painkiller I popped just before bed, I cannot say.

Anyhow, in the context of this sleep, with a bit between my teeth (in addition to my CPAP machine blowing air up my nose and a blindfold on to maximize melatonin production, which requires darkness), I had the following dream, only fragments of which do I remember: I was hanging out with John Lurie. I brought him somewhere to meet these girls that we were maybe going to get it on with; we were in some sort of gigantic indoor shopping mall, and the girls might have been attached to a Santa Claus display. We found the one in particular that I was hot to meet; I'd interacted with her virtually but not in person. Anyhow, in short order, she proved she was totally insane and maybe dangerous, and John was like - "we should get OUT of here." So we did, to discover that we actually weren't in a mall, but trapped in some sort of compound run by a religious cult. "I'm really, really sorry for having led you in here," I tell Lurie. We climb up onto a rooftop to survey our means of escape... for some reason it seems our best bet is to go back into the mall...

That's about all I remember, except that after I woke up, cooking breakfast for my girl and I, I'm taking some Cob's bread - a yummy nutty Cape Seed loaf - out of the toaster, and I think to myself as I put it on a plate to butter, "give the yak some toast." 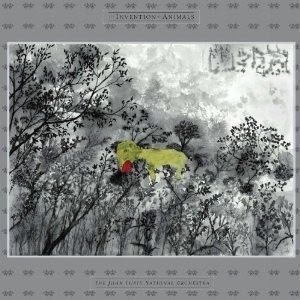 John Lurie, by the way, has a new album out: The Invention of Animals (he talks a bit about it here). It's a revisitation of some of the music he made in the 1990's with a group called The John Lurie National Orchestra, with Calvin Weston and Billy Martin (there's a live recording of them on Youtube that I've never heard before - check it out). I know their album Men With Sticks; the vinyl has different versions of tracks off that hard-to-find disc, plus (I think) some unreleased stuff, and is at the top of my must-get list at the moment.

Remember back in the late 1990's, when people were actually excited by jazz, listening to the Lounge Lizards and John Zorn and Ornette and so forth? When the used CD floor of Zulu Records had a jazz section that at first took up half a shelf, then a whole shelf, then wrapped around and took up half another? Remember how it got smaller and smaller, back when people were still buying used CDs - back before they closed their used CD area entirely? People just aren't as excited by jazz as they once were.

Maybe this new Lurie album can help with that... this is pretty amazing music.
Posted by Allan MacInnis at 8:22 AM