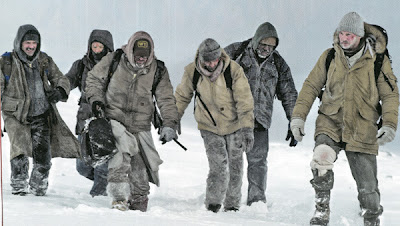 ...an excellent film. Director Joe Carnahan made an impression with Narc several years ago, a gritty, intense throwback to '70's American police thrillers (think The French Connection, Busting, and vintage Sidney Lumet), and wrote the screenplay for a better-than-average tale of police corruption, Pride and Glory, which no one else seemed to like, but has done nothing since that I noticed (unless you count The A-Team). With The Grey, he crafts one of the best men-against-the-wilderness movies I've seen, not as overblown with macho white man posturing as The Edge, not as genre-bound as (much as I love it) Rituals... (I'm not including Deliverance in the list of films I'd compare it to, since that film is less about the confrontation with nature than depraved hillbillies, and it would open the door to a discussion to a whole host of urban/rural horror films, which is not a genre that applies here). It's themed around the human confrontation with death, with a group of men who survive an airplane crash in the arctic having to struggle with the elements and a pack of wolves into whose territory they are trespassing; it may take some liberties with the human relationship with wolves - since I remember reading (I think in Barry Lopez's Of Wolves and Men) that since European settlement of North America, there are no recorded attacks of wolves on humans - but it does so believably, and Carnahan appears to have done his homework re: wolves in other regards - he's allowed a bit of poetic license.  It's perhaps one of the "heavier" films to get mainstream theatrical distribution lately, has believably human characters, great location images (it's shot mostly in Smithers), and a few images I suspect I will remember for years. The Straight's Mark Harris praises the film here, while Adrian Mack interviews Carnahan here. I also heartily endorse The Grey, and only mean praise when I say there was a sequence I mostly "watched" with my hand clamped over my eyes. Not many movies evoke that response in me these days...
Posted by Allan MacInnis at 4:52 PM