A movie for Haiti: The Agronomist screens Friday 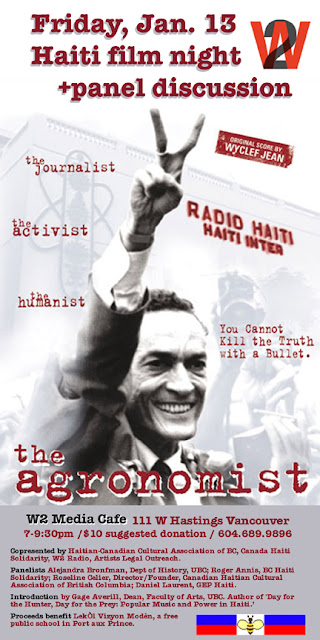 A Jonathan Demme film screening to benefit Haiti! Martha Rans, involved in organizing the night, writes that the evening is "a fundraiser for a project in Haiti that is making schooling available to kids who would not otherwise be going to school.  Especially since the earthquake.  The film is a film follows the life of  Jean Leopold Dominique, who ran Haiti's first independent radio station, Radio Haiti-Inter, during multiple repressive regimes.  The panel discussion features two people who have direct knowledge of the work of Dominique and the film as well as Daniel Laurent from Haiti who directs the school."
Posted by Allan MacInnis at 9:43 PM