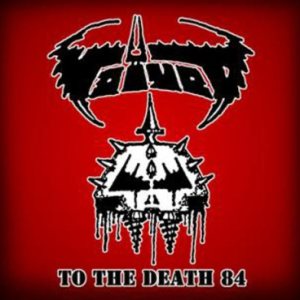 As some of you may recall, my enthusiasm for metal is relatively recent. I loved it when I was 13, even saw some high-profile concerts back then (Sabbath touring Mob Rules, Priest on Screaming for Vengeance, and Maiden on The Number of the Beast - three pretty cool shows to have been at, even if my memories of them now are pretty scanty). Alas, I rejected metal just as it was getting interesting; tribal divisions between metal and punk (and my genuine dislike of the politics and attitudes of the metal camp, to say nothing of the fact that they tended to beat people like me up) were such that when it crossed over with punk, I saw it as an infringement on, and commodification and dilution of, punk, not a vast improvement of metal, and I entirely skipped the onset of speed, thrash, and death metal, along with hundreds of great bands up-and-coming in the 1980's - like, for instance, the Canadian band Voivod. I remember there being buzz around them back then, and thinking, "yeah, but it's metal." That was enough to keep me away.

Funny, then, that Jello Biafra - one of my heroes of punk - would be the one, all these years later, to finally turn me on to Voivod. Alternative Tentacles just released To The Death, from a 1984 demo tape that predates their first official releases. Man, is it great - there are samples on Youtube, if you want to hear for yourself (tho' they're taken from the tape, not the A/T release, which may well sound better - I haven't done a close compare). The original recordings were done, according to Away's section of the liner notes, "live in our jamspace in January 1984 with an old tape recorder and a couple of microphones," so there is definitely a crudeness to the sound quality here, which adds to the sense of raw passion and conviction on hand. The fury with which this band lay into their songs is thrilling, and there is definitely a noticeable punk element, so I imagine if I'd given this stuff half a chance at age 16 (which is how old I was when they recorded it) I'd have loved it - it's got at least some of the power of that ROIR Bad Brains album, you know? Also included are two Venom covers (another band I deliberately avoided back in the day - they scared me!) and a Mercyful Fate one. I'm still noob enough at metal that I can't immediately pick those out, but give me a few dozen listens to the album. What a super-cool Alternative Tentacles release! Most fun surprise I've had from them since the Knights of the New Crusade...!
Posted by Allan MacInnis at 11:17 AM