No Fun City on DVD 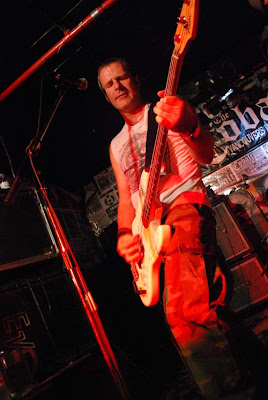 Gerry Hannah onstage with the Subhumans at the Cobalt, 2008, photo by Femke van Delft, not to be reused without permission

Toured Mom through No Fun City as part of our evening's viewing tonight - it's out now on DVD. The film chronicles the sorry state of music venues in Vancouver, cutting mostly between Keith Wecker, David Duprey, Malice Liveit, and wendythirteen in their respective struggles to keep punk, metal, noise, and other not-about-the-money music events happening in Vancouver. Mom really is only slightly interested (only because I know or have interviewed many of the people in the film), so I speed-searched through it for her, mostly scanning to see familiar faces or places. (I got particularly enthusiastic to see the Cobalt washroom again, for some reason, and paused to tell her an anecdote or two... Just thinking about it brings a scent-memory, which is by far the worst smell I associate with positive memories and feelings. Plus I got to see footage of the final Subhumans gig there, which I wasn't able to be at, because I was busily packing my furniture to leave a bedbug-and-mouse infested apartment in the west end and return to the suburbs to face my mother's incapacitating illness and my father's impending death). It's a heartbreaking film about a maddening state of affairs, but it's necessary viewing if you still haven't seen it, and a very well made documentary, more than deserving the acclaim it has received; it can be purchased for a very reasonable price at the Videomatica sale store (in back of Zulu) or other shops around town. 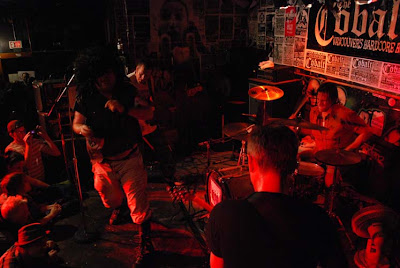 Subhumans, Cobalt 2008 - photo by Femke van Delft, not to be reused without permission
One wee issue that I should mention - for some reason, unless there's some weird malfunction with my Mom's DVD player, which is definitely possible, the film is presented in a fullframe format that cuts the names of various people interviewed off at the edges. Last time that happened to me was with an independently produced DVD of Zev Asher's, so it might just be an artifact of the technology they've produced the DVD on as it interacts with the technology I'm using (it's an older DVD player, an older TV, and so forth). Then again, it might affect others, too, so I gotta mention it. Don't let it stop you, though - this film is a must see if you care about live music, or Vancouver, or Vancouver live music, or DIY culture, or punk, or....
Posted by Allan MacInnis at 12:11 AM