Jarkko Aaltonen/ Korpiklaani interview - plus Jeffrey Lewis in the Straight 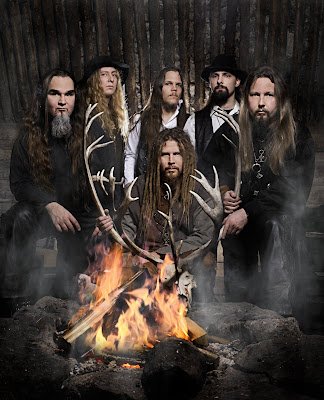 I did an interview for the Straight with Jarkko Aaltonen, bassist for Finnish folk-metallers Korpiklaani (at the left in the photo). The band plays Saturday at the Rickshaw. A few outtakes follow!

A: So... This is your third North American tour?

J: Yes, third time touring, although before the first tour, we actually did a one-off show in Calgary.

A: Is it your second time in Vancouver?

J: Hmmmm - no! Third. On both of our previous tours we’ve been to Vancouver. The first time was at this big ballroom in the city centre and the second time was at the Rickshaw.

A: …which is notoriously in a very bad part of town.

J: Yeah, we sort of realized that the last time we were there.

A: Did any interesting experiences or stories come of that?

J: Well - not really, although - I was in the city centre, whatever it’s called, this sort of walking district there, and I was with a friend of mine, and we were thinking that we need a hotel room so that we could shower and stuff. But we know that we have to get that from closer to the venue, so we go back to the venue, and we start walking this one street [and we’re thinking he’s talking Hastings, here] trying to find a decent hotel that has a room free. And in the end we end up 200 meters from the spot that we left in the city centre. We were back there. Because as you said, that district around the Rickshaw is not really the fanciest. Not that we were looking for a presidential suite…

A: I was wondering if you get asked a lot of stupid questions - I mean, I was watching your Bill Zebub interview in the film Pagan Metal -

J: Yeah, but that guy has made an art from being an idiot! I mean, nowadays if we start getting really really stupid questions, you know the whole idea of the interview is not to be informative but funny. And I don’t mind doing those - it’s another form of interview.

A: But, I mean, I was wondering if there are typical misconceptions that come up when North Americans interview you, due to cultural differences or such?

A: Heh. I bet. But the cultural differences are significant, though - I mean, you guys have actual pagan roots to go back to. In North America, we just have made-up stuff like Wicca and Satanism... I get a bit jealous...

J: Yeah, but on the other hand, as a sociological experiment, it’s a fine piece of art. You take people away from their roots and see what they come up with.

J: …and extreme Christianity as well. (For more on Finnish paganism versus Christianity, see Jarkko's answers in the Straight!). 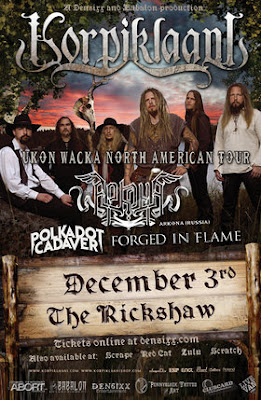 Also of note in the Straight: Mike Usinger has done a big Jeffrey Lewis feature. Jeffrey plays tonight at the Biltmore - he puts on a great show, y'all should check him out!
Posted by Allan MacInnis at 8:36 AM