The Exorcism of Emily Rose (versus killer sheep)

Even for a genre fan, most horror films fail to excite. Case in point: out of an interest in representations of genetic engineering and GMO's in science fiction films, I watched a New Zealand horror film this afternoon, Black Sheep, that has rampaging genetically modified, mutant sheep besieging a farm - it's sort of Night of the Living Sheep, with a few nods by the Weta SFX team to Rick Baker's American Werewolf in London prostheses. 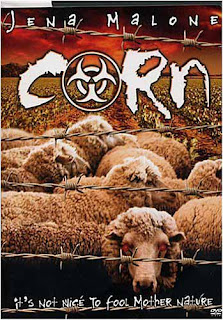 The film neither has the seriousness or intelligence of Larry Fessenden's No Telling nor the emotional power of Jena Malone's terrific performance in a film called Corn (and you know the world is getting pretty fucked up when "corn" can be the title of a horror movie. Incidentally, that film also involves violent sheep, as the box art makes clear). Black Sheep tries instead to make an entertaining exploitation vehicle out of its subject matter, in the vein of Peter Jackson, but it doesn't go far enough, isn't fun enough, is neither dumb enough nor smart enough to succeed; the sheep FX are passably entertaining, and I suppose I'll keep the DVD - since there just aren't that many movies made in which sheep kill and eat people - but I cannot see the circumstances arising where I'd ever revisit this film (unless I were maybe writing a paper on the representation of GMO's in horror). That's par for the course; it's rare, especially when you watch as many horror movies as I do, that one makes you take notice, makes you aware that you're in the presence of something original. You don't even expect as much - I wasn't disappointed by Black Sheep in the slightest, even though I didn't care much about it, because, as a hardened horror fan, I know when I watch a horror movie, the best I can expect is to be idly amused; anything more than that is a rare bonus. 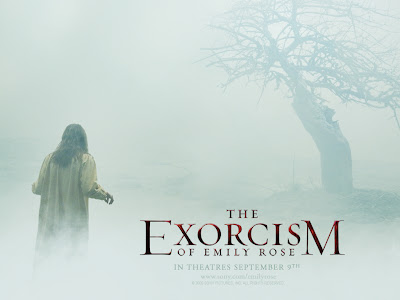 That's why I'm writing this; to direct genre fans to an interesting American film called The Exorcism of Emily Rose. There are a dozen good reasons to watch it: it involves a very unique genre cross-fertilization between the courtroom drama and the exorcism thriller; it has terrific performances from its principals, including Laura Linney and Tom Wilkinson, both of whom I admire, and Jennifer Carpenter, better known as Dexter's foul-mouthed cop kid sister from the TV series (horror fans will also know her from the English-language remake of [REC], Quarantine). Though it's an American production, also boasting a few other name stars (Mary Beth Hurt, Campbell Scott), that it was shot in Canada means there are various excellent Canadian supporting actors, like Colm Feore, Kenneth Welsh, and Henry Czerny present, too. It was filmed at least in part at UBC, and apparently the Buchanan Tower is visible in the film - a building which I pass every day on my way to classes, often humming a Roky Erickson tune, but nonetheless failed to recognize on screen. More than any of that, however, the appeal of the film lies in how it uses its courtroom construction to intelligently examine questions of faith, taking us fairly far into the realm of the supernatural while mostly avoiding the sort of hystrionic, conservative Bible-waving grand guignol that usually attends such matters in American-made horror films (even the highly enjoyable The Last Exorcism, a film which is so smart up til its risible last few minutes that they really stand out in contrast and lessen the overall effect). And while the claim "based on a true story" is usually a ploy to make horror movies more frightening, discredited for decades - and I think we can thank a number of films that draw inspiration from the exploits of Ed Gein for that - there is indeed an interesting, real-life exorcism story that inspires the film, that of Anneliese Michel. (I'm no expert in these matters but the Wiki page links there certainly seems to echo the film I've just watched). 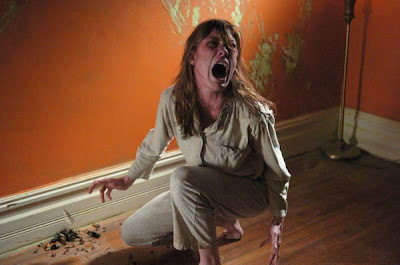 I'm not attempting any thorough analysis here, but I think horror movie fans out there would enjoy this film. It's not a great film, but it's one of those horror movies that rises far enough above the median that I get excited watching it - a rare enough experience that it's worth remarking on. A more thorough discussion of it can be found here.
Posted by Allan MacInnis at 12:02 AM