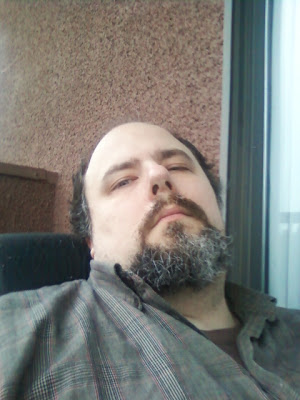 The term finally ended at UBC - I bussed in on Thursday, a complete but unsatisfying draft of my "final" final essay on Robert Altman's The Long Goodbye completed the night before; somehow the five hours' sleep I'd had were enough to recharge me, because I rewrote the whole thing, sitting at the UBC library, between 9:30 and 3pm that day. It's much better - still only 95% of as far as I'd have liked to have gotten it, since I didn't really develop the most interesting thesis I hinted at (that it's a sort of proto-post-modernist take on genre, from back when no one thought in those terms) - but word counts, time limits, and exhaustion finally took their toll. What I finally submitted was good enough, and definitely better than I'd written the night before.

I'd half-considered staying in the city for the metal show at the Biltmore, but once I finally got the paper in I knew that all I wanted to do was GO HOME. No more commuting, no more writing, no more shopping, even, until classes start again in January. What a relief, what a relief - leave Vancouver for the Vancouverites as the Christmas frenzy sets in. No shows I need to see - Bison BC and The Rebel Spell will tide me over for awhile - and HMV can close without me; it's mostly a fake sale, anyhow, with most stuff only marginally marked down, and tons of cheap shit SHIPPED IN to sell at what are supposed to be blow-out prices but in fact still gives them a nice profit. The fact that so many of their shelves are bare, when the real sale price is only 10-15% off, is a bit puzzling - that slight a discount is hardly enough to get a hardcore scavenger like ME excited, anyhow. Still, there's not much meat left on that carcass - the DVD section is quite depleted, so someone is willing to shell out their cash...

Anyways, here I sit, exhausted, stuck in the suburbs, but not minding it so much. Smoke a bowl, put on Wolves in the Throne Room, and slump in the chair on my balcony, cold air in my nostrils, the chill getting under my clothes in a most refreshing and comforting way. I wish that the mist on the mountains were a lot closer, that I didn't have all this fuckin' TOWN obscuring my view. Even the clouds have a beauty to them. It's really not so bad.
Posted by Allan MacInnis at 4:12 PM

UBC. Kind of a degree mill isn't it? Once your the right kind of student, you automatically are assigned grades.

Maybe - I can't really judge that, this early on; and I can't be sure, even if that is the case, it's not true of many other universities. It doesn't seem all that different from SFU.

That said, there is definitely interesting work going on there, and the three professors in the film studies department that I've encountered so far - Ernest Mathijs, Lisa Coulthard, and Mark Harris - are all excellent, posing challenging assignments and expecting hard work. So whether what you say applies to the university as a whole, it doesn't really matter to me...!