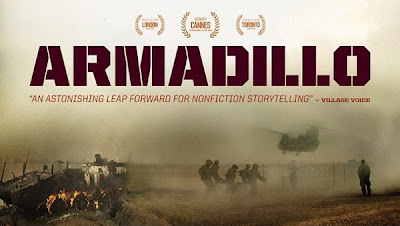 When writing movie reviews, I often quibble with other people's blurbs. It provides me a useful, if perhaps somewhat lazy, starting place; my apologies to the blurb-writers of Vancouver, but its a strategy I don't plan to abandon anytime soon. The one for Armadillo, opening Friday at the Vancity, begins: "Documentaries don’t often evoke parallels with such cinematic benchmarks as Apocalypse Now and Full Metal Jacket, but then few documentary filmmakers have gone so close to the line of fire as Janus Metz..." Perhaps whoever wrote that can even anticipate where I'm going to find fault... I hope I don't grow too predictable...

...because the sound of helicopters aside, I must confess that I didn't think once of Apocalypse Now when watching Armadillo. I can see why making reference to that film might seem a useful strategy for getting bums on seats, but it's not entirely apt, since the two films are morally and aesethically very different. On a strictly visual level, I did think of Full Metal Jacket a couple of times, and of a less-appreciated 1989 Vietnam war fictional feature, 84 Charlie Mopic, which was one of the earlier "shakycam" pseudodocumentaries; in fact, there are some shakycam moments in Armadillo, prompting me to reflect that the technique has been so widely used to fake a documentary style that I'm unused to seeing it in real documentaries. Mostly, though - seeking cinematic antecedents - I thought of the documentaries of Frederick Wiseman, noted for assembling documentary footage into a strikingly coherent, provocative whole. That Armadillo does masterfully; as the blurb continues, "Metz’s documentary possesses all the character development and story structure readily associated with a fiction feature. Impeccably edited, Armadillo spins a complex narrative that lures viewers into its world and hooks them on its plot points before locking them in a stranglehold. Expect to leave the theatre rattled and riled." 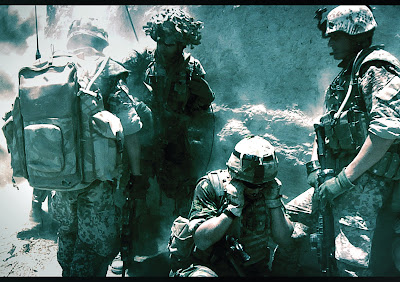 Indeed: the film is an unsettling experience, since it calmly and lucidly conveys a sense of the deep futility of the current international mission in Afghanistan. Politically, it seems impossible to bow out of "lending a hand to democratize the region," and certainly there must be some Afghans who appreciate the international presence. The ones who speak in the documentary mostly seem to convey variations on the following, however: "Because of fighting between the Taliban and international troops, I have lost my (livestock, mother, wife, children, home). The Taliban are armed and prepared to fight. You are armed and prepared to fight. We are neither, so we're the ones who suffer the most. We wish you would just leave, but if you are prepared to give us money in reparations for the destruction and death caused by this war, as long as we can do it anonymously, we cannot turn it down. But please don't ask us to help you, because the Taliban will kill us." 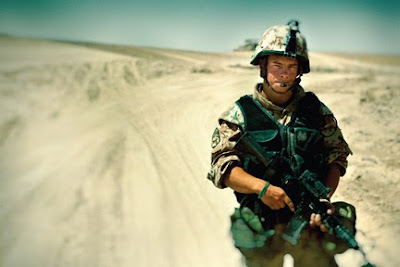 If this seems to be the collective voice of the people that the international mission is allegedly there to help, the collective voice of the Danish youths deployed for the first time seems to be, "We came here wanting adventure, bonding, and life experience. Instead, we found a lot of boredom, futility, and moral ambiguity" - so much so that when there is a firefight, and several Taliban are killed, it becomes a very exciting moment for the team - who may or may not overstep obvious ethical boundaries in their enthusiasm, such that the release of this film resulted (again from the blurb),"in a government inquiry into whether Danish soldiers broke the rules of engagement by their all-too-human actions." 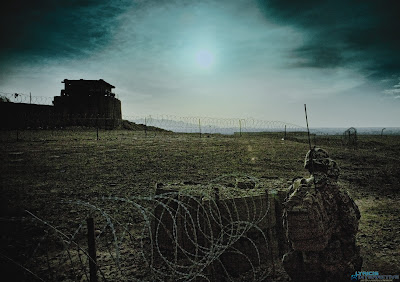 For an intimate sense of conditions in Afghanistan - which is something every Canadian should want, as long as we have troops committed there - I hesitate not at all to call Armadillo a must-see. It's also a very fresh, exciting documentary, much more gripping and visually compelling than docs usually get, and full of interesting insights into the psychology of contemporary warfare.

In the end, I'm right there in the trenches with the blurb-guy: this film is highly recommended.
Posted by Allan MacInnis at 11:23 PM