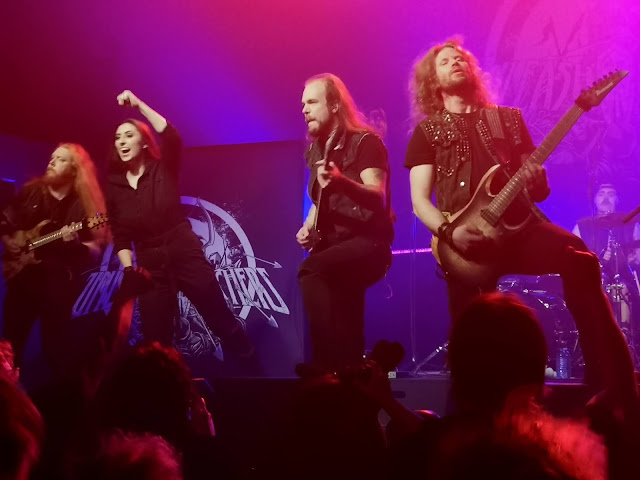 There were many unfamiliar feelings resulting from my return to the Rickshaw last night for Unleash the Archers, including simply going to the venue - last attended March 8th, 2020, over 20 months ago, for Paul Pigat and Coco Montoya - but the most striking was the number of times I had to say "Huh? What was that?" to my wife after I got back...! My ears are out of practice, I guess, and I completely forgot that I would have to compensate, trying foolishly to conduct a conversation with her from the kitchen, while she was in the living room - sure had to run back and forth between rooms more than I remembered.
And as much as I've written about the PHO and seats previously, habit was more powerful than memory, and - having missed Apprentice, arriving early in Kosm's set - I still had to do a double-take when it came to seats; there I was, walking down the aisle, anticipating where I was going to stand, then being confronted with the unfamiliar expanse of folding chairs and having to remind myself all over: "Oh yeah, right!" 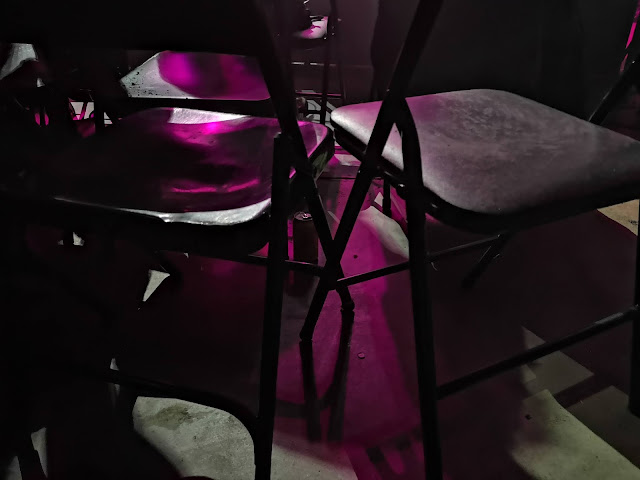 The circumstance was, of course, subject of some of the stage patter during the night, from Kosm's lead singer joking that she felt like she was playing a high school talent show to Brittney Slayes getting the audience going with a bit of patter that began, "is headbanging the same as dancing?" People could stand at their seats and bang their heads all they liked, and so they did... so they did... Brittney was in fine voice, seeming relaxed, confident, and grateful, thanking the audience many times for saving the band's butts by changing tickets; she was funny, too, asking in the buildup to "Tonight We Ride," "How many of you have to work tomorrow? Fuck work - everybody is playing hooky tomorrow: party at my house! ...Just kidding, my cat doesn't like strangers..."
There were some amazing guitar solos during the night - certainly the hottest, fastest, most brain-tingly deft solos that I've seen live since that Pigat/ Montoya double-header. Really fun to hear. And since my wife ended up with the last Unleash the Archers t-shirt I bought, I was happy that there were some super cool new designs. I guess they have retired their soloing Sasquatch shirt, coveted by me since I caught them at the Buddha, but there was a definite vintage-underground comic vibe to the one I bought last night, a "Conquest 2021" tour shirt that ended with the show tonight (last night's hadn't been added to the tour yet. See their new North American merch here). 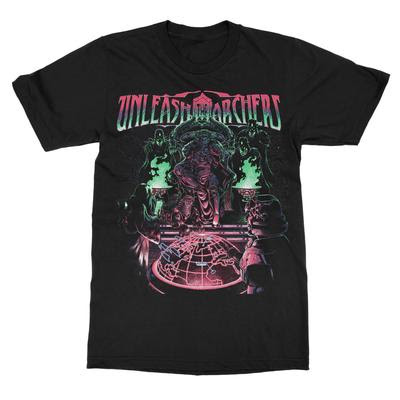 Maybe the image is dissimilar but there is something in the colour scheme that reminds me of this great Corben underground comic cover, for Fantagor #3: 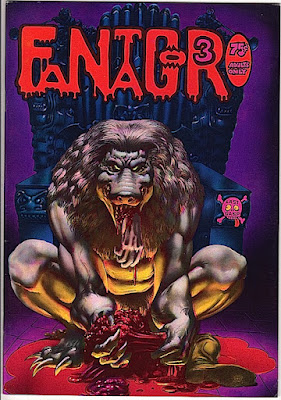 ...or maybe it's meant to evoke the colour scheme of the lights? There does seem to be a cellphone in the hand of the acolyte on the left side of the t-shirt image... Hm. 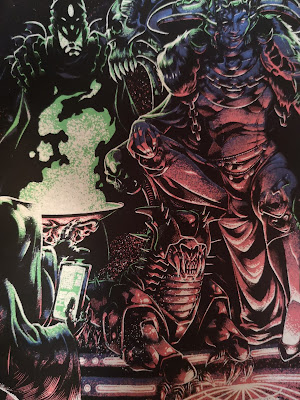 But hey, I am as bad as anyone else - I snapped a few photos, too. I hope my writing in support of the band gives me some license, here (I also tried to do the "close my eyes and listen" thing during a few of the night's ripping solos, which, as always, greatly enhanced the musical experience, but it is hard to do with a band this fun to watch). 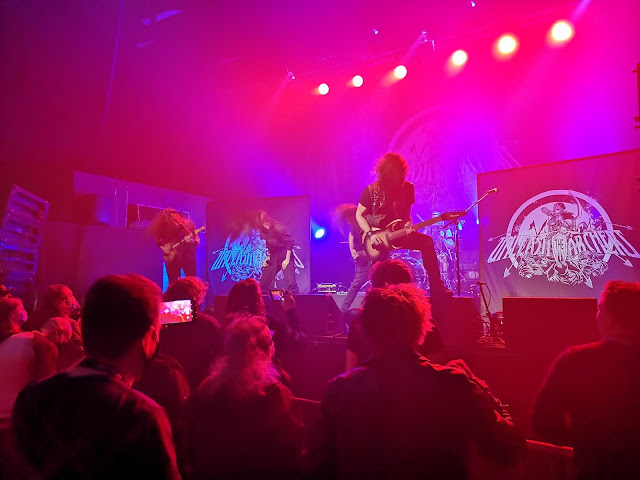 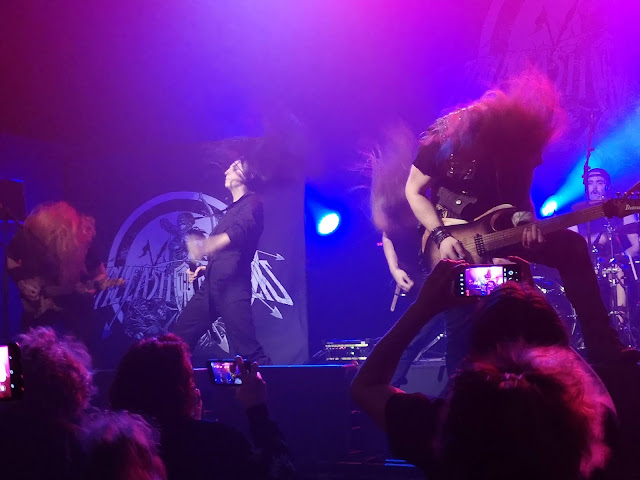 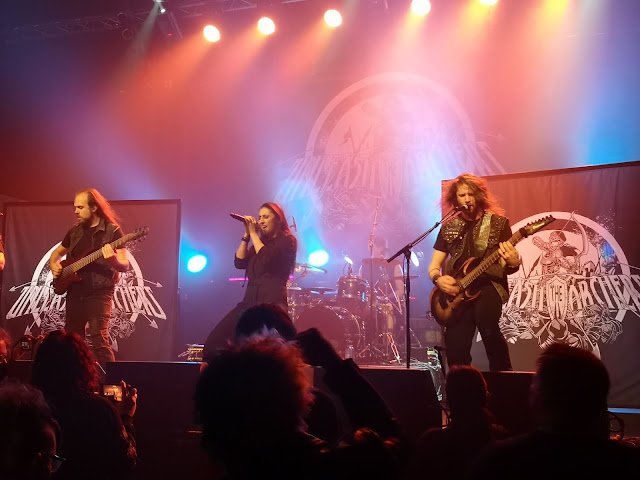 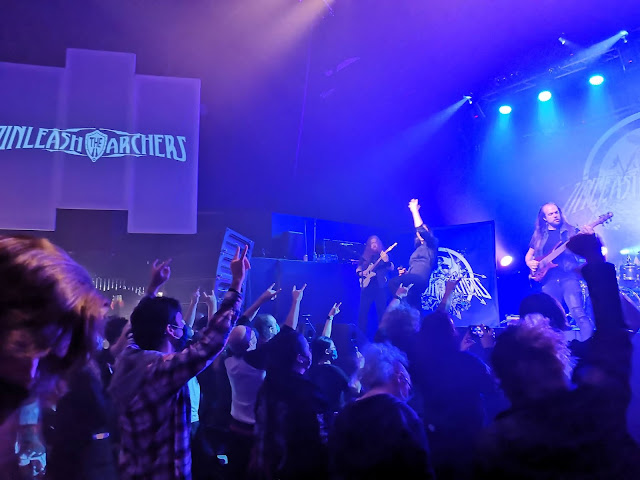 Anyhow, great night, very safe-feeling, and the annoyance of having to work around seats was more than made up for by having found GOOD seats, close to the stage (like I say in that Black Angels piece, I'm an old fart who is inclined to sit much of the night, anyhow). It also made a great practice run for DOA on Saturday - a show that I suspect will be much weirder with seats than Unleash the Archers was, because moshers wanna mosh, but... we'll see. I have seen no one so far behaving in a remotely unsafe way - a few people had masks off, but only so they could drink. Felt pretty safe! My one bit of advice here is that you'll want to arrive close to when doors are posted, because things really did start soon after people were in the venue, and you'll prolly want a good seat...
Welcome home to Unleash the Archers...
Posted by Allan MacInnis at 8:16 AM