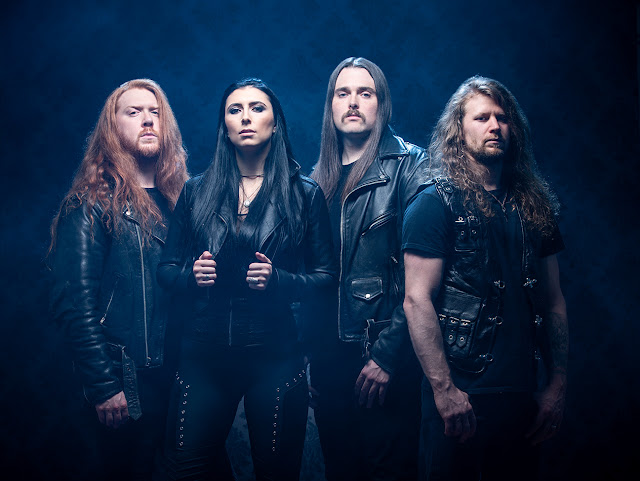 I've written about Unleash the Archers a few times - here (2014, when I thought they really should have won the first Vancouver Wacken Metal Battle), here (2015), and here (2018, apropos of the release of their concept album Apex), for example. A Canadian power metal band that hails from Vancouver Island, I first saw them maybe ten years ago, a few blocks away from my former apartment in Maple Ridge, at a bizarre little venue - a tiny evangelical church on the Dewdney Trunk Road, formerly a pool hall, that briefly were open-minded enough to book metal shows (at least until Theocide played there, with Metal Mike being absolutely unable to resist throwing barbs from the stage at organized religion - "You do realize what Theocide MEANS, don't you?" - at the hapless church soundman, which I assume helped kill that venue for gigs; or maybe it was just too weird to have a circle pit in a church?).
That would have been in 2011, when Unleash the Archers had just released Demons of the AstroWaste, which I bought on CD at that show, and was more than happy to listen to their tuneful and rousing anthems. I also liked that Brittney was approachable and friendly at the merch table, and extremely grateful for ANY good bands playing weird-ass tiny venues in Maple Ridge, since gigs don't happen often out that way.
I was even more pleased that every subsequent show I saw Unleash the Archers at was bigger, better, and cooler: because - not counting their short set at the Wacken Metal Battle - the next time I caught them was at Funkys, then the Smilin' Buddha, then the Rickshaw. In the ten years that I've been following them, they've also signed to a European label, Napalm Records; toured China; and put out increasingly bigger'n better albums, like Time Stands Still, which has two songs I utterly adore on it, "Frozen Steel," about what it means to be a Canadian metal band, and "Test Your Metal," which exhorts other bands to push beyond their local bubbles and tour - a bit of preachin' that the band themselves have clearly been practicing, to great success. I had liked Demons of the AstroWaste, but this was next-level stuff, proof that I'd picked a great band to follow. 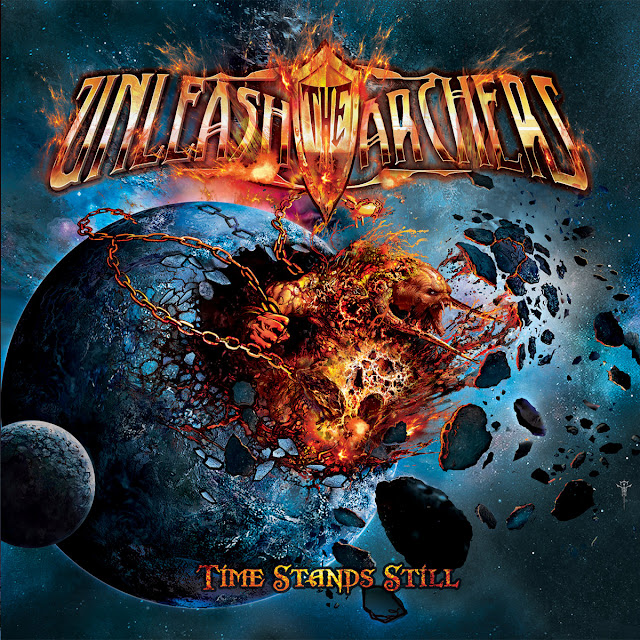 The musical highpoint of the next album, Apex, was, for me, "The Matriarch," which I'm pretty sure Brittney and I talked about at some length in that final Straight interview I did with them, linked above. Mostly I just liked the idea of a female vocalist declaiming "She is the Matriarch!" while creating a badass female villain for her tale. However, the thing that was coolest about that album, Apex, was that it began an archetypally-loaded, coherent narrative. Also some pretty cool cover art, really! 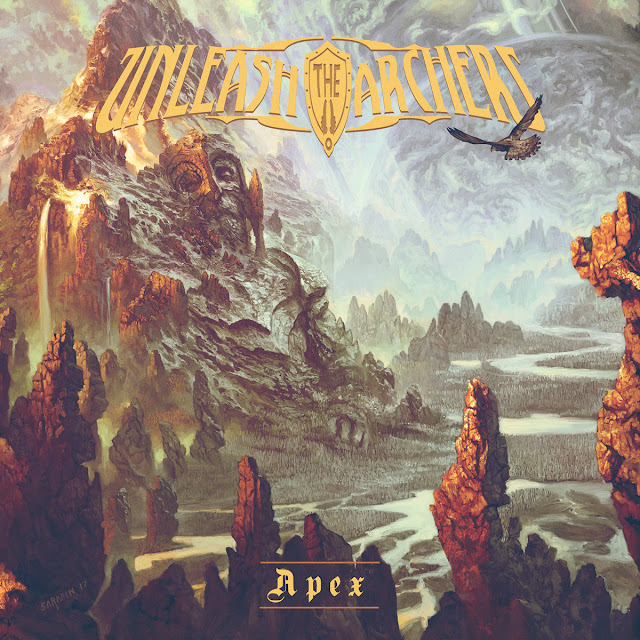 That is as far as I've gotten with Unleash the Archers catalogue; with abundant distractions, I have not yet caught up with their 2020 release, Abyss - though I did peek at a video from it, apparently about the hazards of playing live under the influence of powerful hallucinogens (I'm just kidding, but you'll see what I mean if you watch it). Seems like they're in great form - but I'm holding out really delving until I can buy it at their merch table tomorrow.
And here's the thing - as you may have gathered, the PHO's apparent chair fetish has thrown the Rickshaw for a loop, with proprietor Mo Tarmohamed being told he could start selling to capacity, then being told something very different, which is why certain sold out shows, like Unleash the Archers' gig there on Friday,  have not had more tickets announced, and other shows (like Archspire's record release) have had to be moved to two dates, Nov. 25th and 26th. Unleash the Archers ALSO have added a date - this Thursday, the 18th - to accommodate that situation, with the band asking fans on Facebook to consider coming the earlier night.
As Brittney explains it in an email to me, "we added another show because the Friday one straight up would not have been able to go forward at the current capacity. We would have had to cancel hundreds of tickets. We sold the show out because Bonnie Henry announced that venues could return to full capacity, and then a couple weeks later she reneged and said that she meant large venues like BC Place and Rogers Arena, not small clubs like the Rickshaw. Luckily, we had a hold on the day before (the 18th) just in case something like this happened, so we begged people to switch their tickets over and a lot did! Some tickets we did end up having to cancel but not nearly as many as if we had to try and stick to one night. Seated capacity is much less at Rickshaw than standing, so that is where that all came from. Small venues must be seated. Which is absolutely ridiculous! No other province has this restriction! Venues in Alberta have been open for weeks and their COVID numbers are going DOWN so that is proof that people that are going to live shows are not the ones spreading this bloody thing around still….!" 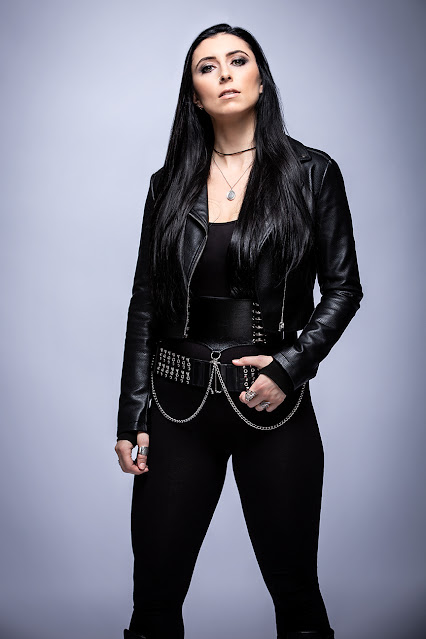 Now, this is a very pro-social, responsible thing for Unleash the Archers to have done, but also really terrific news for fans like me who had not been able to get tickets for the Friday gig. Tickets are still available for Thursday, so for people who want to support the Rickshaw, support killer local metal, and check out the openers. the proggy KOSM and melodic death metal band Apprentice - this is a great way to do it.
Will the sets be different on Thursday and Friday? No. "We will play the same set list," Slayes explains. "People are expecting to hear the same show because it was supposed to be the same show. If it was two nights in a row at max capacity that people could attend twice then that is a different story, but people were forced to choose so we are not going to give the attendees something on one night that the others at the next night won’t get. Plus playing the same set is much easier on us, as we can be in perfect shape for every song. We don’t have time to know every song at the drop of a hat unfortunately lol! Maybe one day… ;)."

While I had Brittney's ear - or eye, as this was an email interview - I had to ask what touring the United States under COVID was like - if it was different from Canada, but also different from their past tours. "It was definitely different, yes. We had to be on constant guard. We never went anywhere without wearing our masks, we hand sanitized every time we came back on the bus, we took our temperatures every day to make sure no one was getting that signature fever that precedes all other symptoms. We were extremely careful. It sucked because we really like getting to hang out with our fans and chatting with them and we couldn’t really do that ☹. The shows were great though, and it was nice to be able to get back on stage regardless!"

Abyss, meanwhile, is a continuation of that same, ambitious Apex storyline, Slayes explains. "In Apex we were introduced to our main characters, The Matriarch and The Immortal. The Immortal is a powerful being that is cursed to serve whoever awakens him from his thousand-year slumbers, and in Apex he is awakened by The Matriarch – a power-hungry sorceress with a thirst for immortality. Needless to say, The Matriarch betrays The Immortal at the end of Apex, and in Abyss we see The Immortal finally taking his revenge with the help of a few other important characters..." 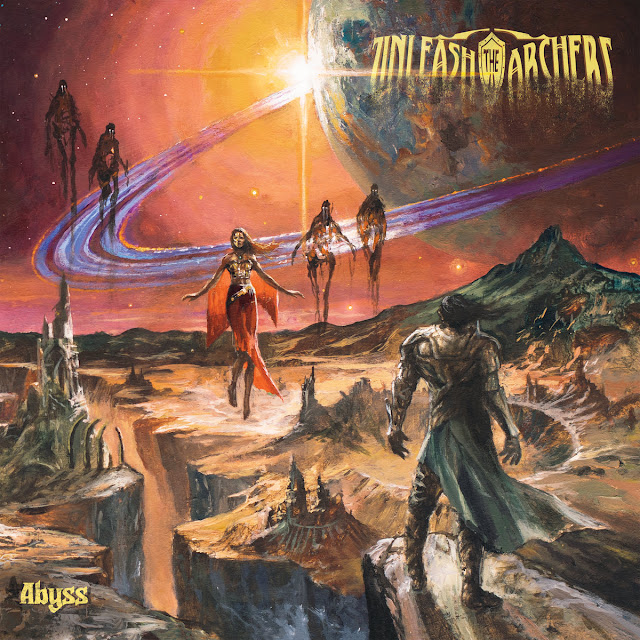 Unleash the Archers will be "hunkering down after our tour through the US in December to write new music, but other than that, we are just focusing on playing as many shows as we can ☺."
See Unleash the Archers if you can - and if you're in Vancouver, consider coming on Thursday, to give some love to Mo and to show appreciation for the band doing a pretty cool thing to accommodate the Rickshaw in unusual circumstances...
(And a big thank you to Brittney Slayes for makin' it easy for me to make something cool of this blogpiece!). 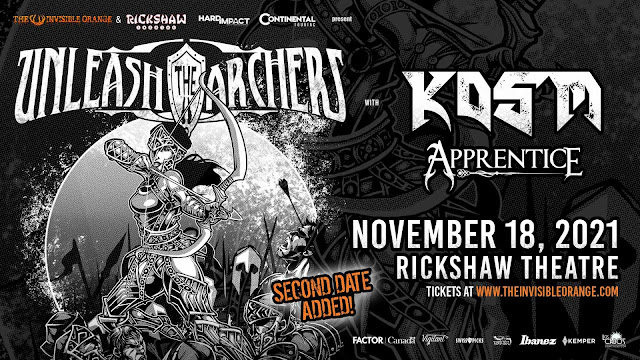 Posted by Allan MacInnis at 4:51 PM