I have more art than I have walls to put it on. And we have tons of stuff in storage that has been in storage since 2017 or so, with no sign of ever emerging. We're going to have to move again sometime in the near future, we figure, so... best to get rid of as much as I can!

I am beginning to think on getting rid of some of it. Some of these I have more attachment to than others. A lot of the gig posters - mostly from shows 10-15 years ago, around Vancouver - were framed with readymade 11X17 frames that cost something like $15 each at an art supply store. A couple items are signed. A couple are missing glass in the front, and a couple of the movie posters are quite a bit bigger than the gig posters and professionally framed. If you're interested, just leave me a comment below - I am open, also, to trades, if you have something I want. Do read the description below each for any caveats and/or the price range...

More to come! Oh, and you can have a deal if you come and buy them ALL. 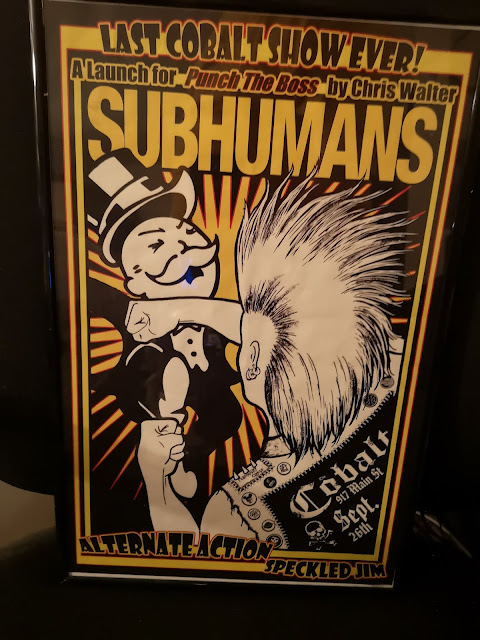 Story: I was not at this show, but I did see the Subhumans at the Cobalt. But the night this gig took place, I was packing stuff up in an apartment ridden with bedbugs and mice - trying to make sure that they didn't come with me. I was also mourning a lost friendship, freaked out that my father was dying of cancer, facing down a layoff at work, and generally pretty messed up. I remember the night well - crying alone in my apartment, trying to decide what to keep, how to bedbug-proof it, and what I was going to throw away. I gather that a somewhat storied ex- of Gerry's showed up that night...
Condition: VG! No cracks in the glass. Frame got a bit dusty.
Price: $20. 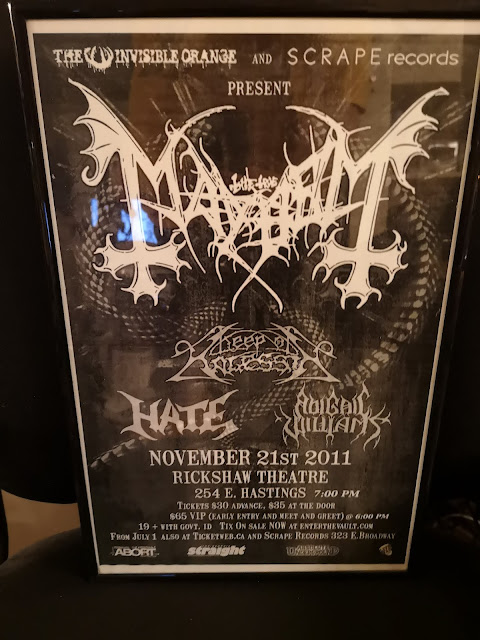 Story: Mayhem's first Vancouver show! I was at this gig and was kinda bored by the openers - good bands, but nothing exciting. I had no idea what to expect from Mayhem, whose reputation proceeds them by several kilometers, but they were not only great, they were quite friendly, even giving a shout out to Skinny Puppy! Poster is not as sentimental to me as the Subhumans.
Condition is VG, price is $15. 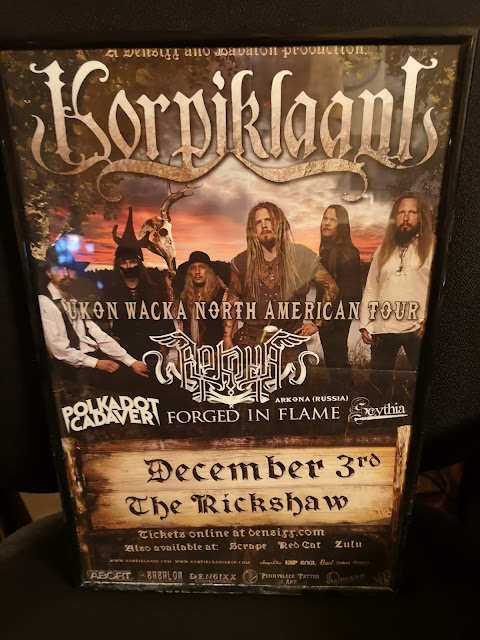 I interviewed Korpiklaani for the Straight, but the real eye-openers this night, for me, were Arkona, who were touring Slovo. I've seen them twice since, but this was the real jaw-dropper. Loved this gig, but I don't need the poster.
Condition VG, price $20. 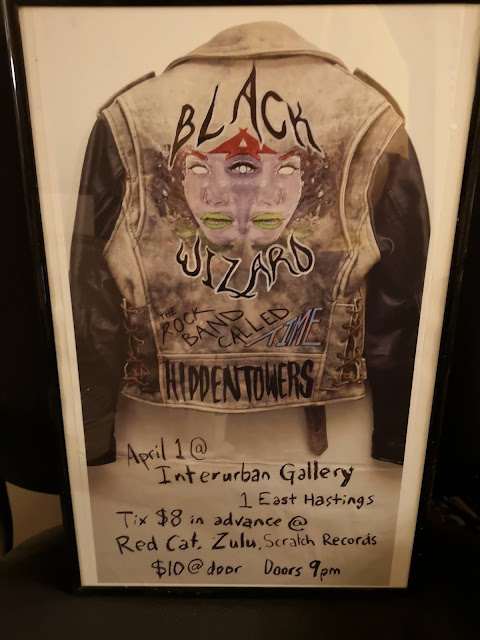 This is the second best poster-qua-poster, in terms of quality of art, hand lettering, etc. I was actually at this gig - Johnny DeCourcy's last with Black Wizard, at a funky little space next to Scratch Records when it used to be on Hastings near Carrall - the final location, that is.
Condition - VG, price $20. 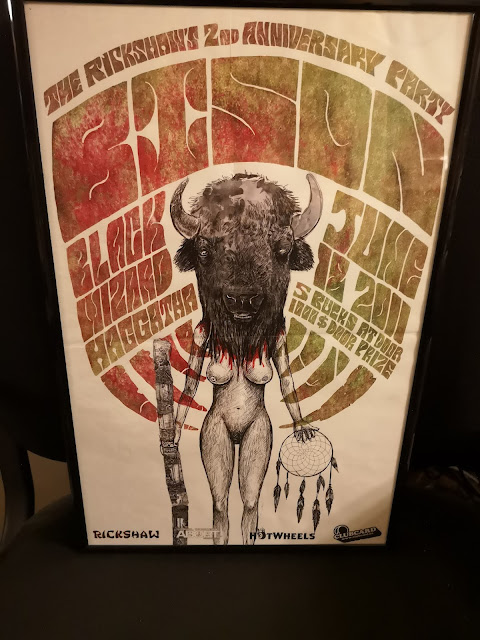 Was at this gig, too. It's an amazing poster but having lived with it wrapped up in the closet is so like not having had it that I'm prepared to sell it, but I'd like something for it, because, hell, it's GREAT. (IT IS ALSO SOLD). 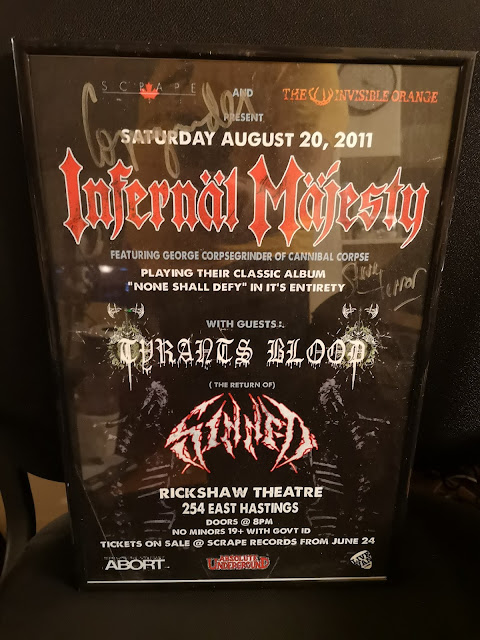 Signed by George "Corpsegrinder" Fisher of Cannibal Corpse, who sang with this Canadian thrash band for a special event, plus members of Infernal Majesty. Condition VG, price $30. 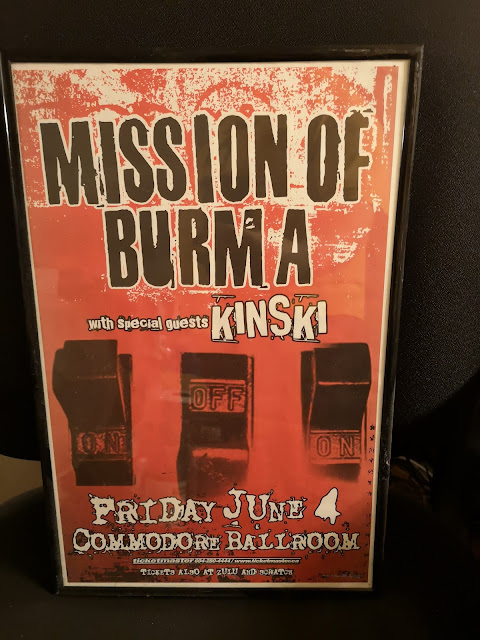 This was Mission of Burma's first reunion gig in Vancouver, and it was moved from the Commodore to Richards on Richards because there weren't enough people in Vancouver who realized what this was, or who cared. It was a great gig. I only ever got to see them twice and this was the better night! Condition VG, price $20. 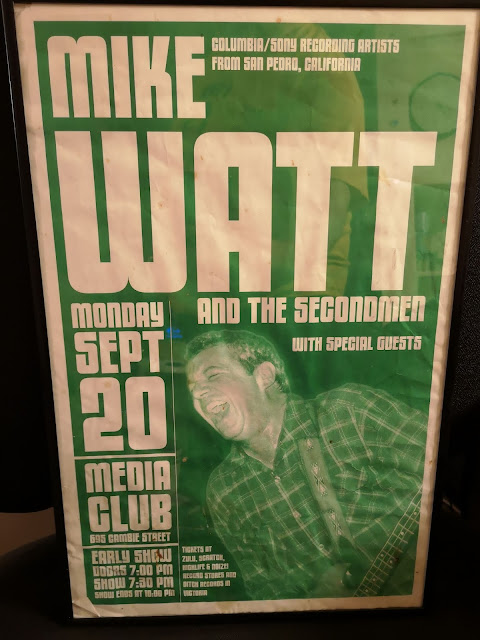 This poster was actually kinda damaged - it was the best I could get. Was at this show, but it was the opera where Watt sang about his perineal infection and surgery, while alluding throughout to Dante. Any fans of "Pissbags and Tubing" out there? Cheap, because not great condition: $10. I paid more than that for the frame, and the frame is in good shape! 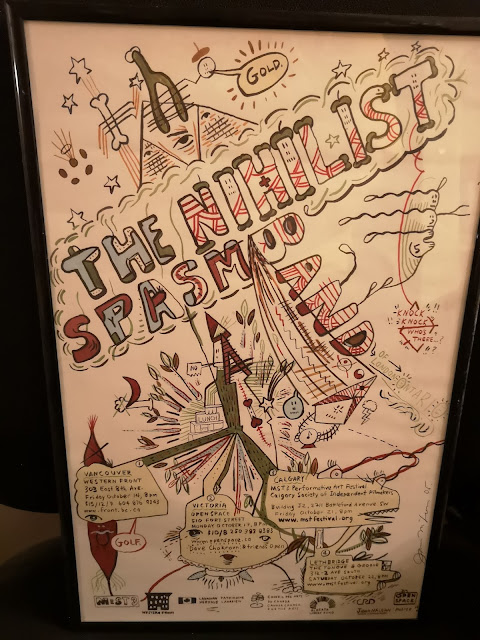 Signed by the artist, Jason McLean - think it might be numbered, too. The Nihilist Spasm Band's only western Canadian show, at the Western Front, later released on CD. Condition VG, price $20. 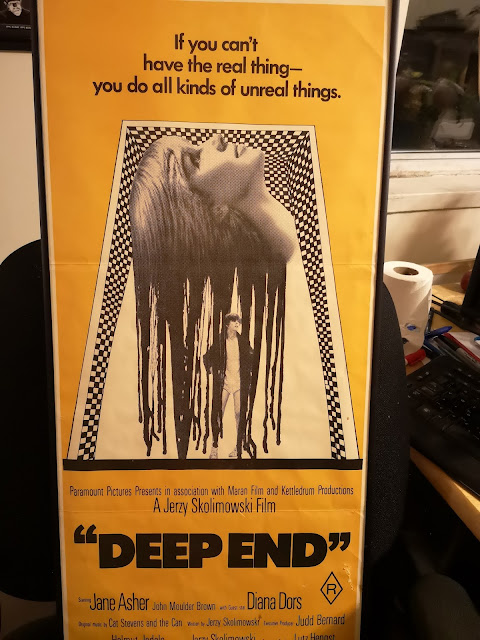 This is a very interesting film, with songs by Can, including "Mother Sky," which they put to good use. Sad it's kind of a difficult film to see - worth a watch. Quite a bit larger than 11X17 - it's Australian, and roughly 13X25 or something? (I'm just guesstimating). The glass cracked out of the poster so it's just the frame and poster, no glass - again, damaged goods, so cheap: $10. 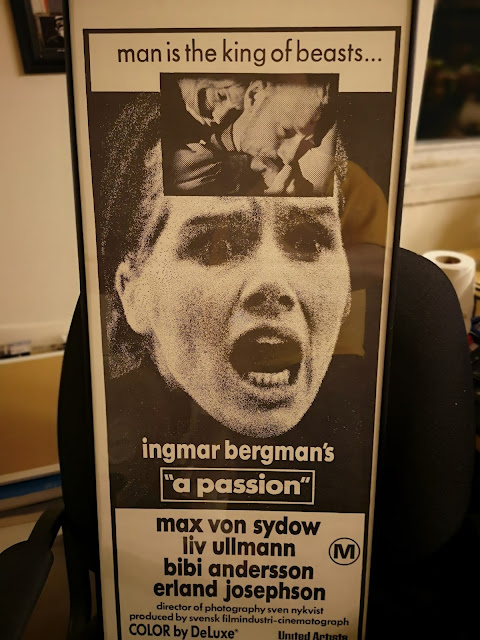 My favourite Bergman movie, back when I had a favourite Bergman movie, distro'd here under the misleading title of The Passion of Anna. This is a more accurate title  it's not a love story, it's a crucifixion, and it's not Anna who gets crucified, but Max von Sydow's character, I shouldn't sell this, because I love the idea of owning it, and at some future place may be able to put it up again, but if the price is right, it's yours. Condition VG - glass intact on this. Same dimensions as the Deep End poster above, whatever those are - 13X25 or something. Australian dimensions - I paid more to frame it, this isn't just a cheap frame. Would like $100, but open to trade if you have something I want. 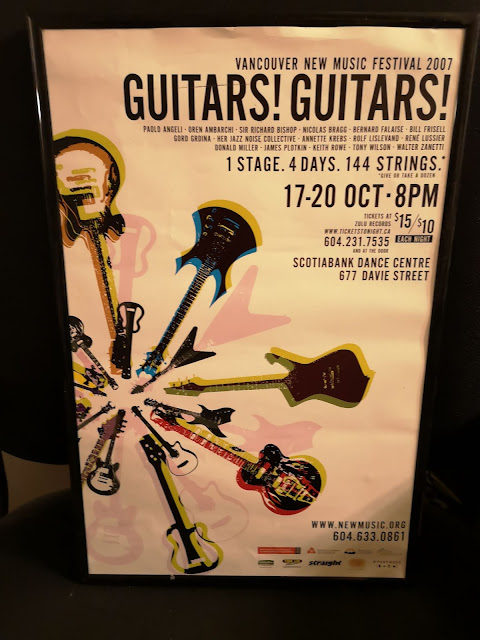 Another one where the glass is gone. I didn't see many of the artists who played this festival - was doing merch. Again - because there is no glass and the poster is a bit worn, it is super cheap: $5, if you want it. 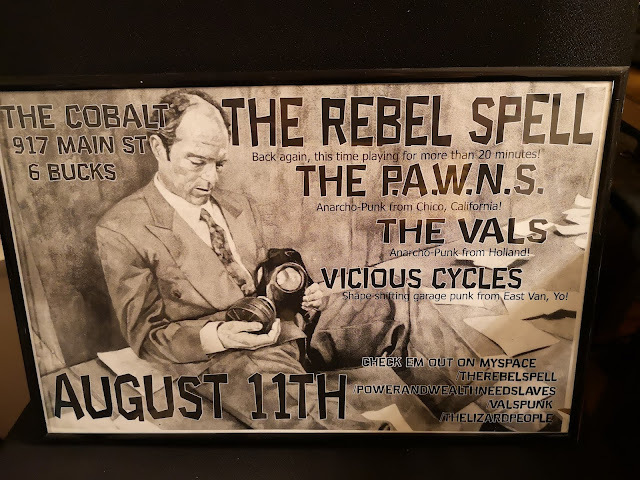 I was at this show, too. Think it was the first time I saw the Rebel Spell headlining - only the second time I saw them at all - and think this was the night where the Vicious Cycles rode into the Cobalt on their motorcycles. Condition VG, price $30.

Like I say, more to come; prices go down if you buy a bunch; and you're welcome to offer stuff in trade, bearing in mind that I'm decluttering and only am gonna take trades that I genuinely am excited about. The idea is, btw, that these are for LOCAL buyers - not really all that keen to ship them, would rather people just picked them up, but I'm open to offers. If you're interested, comment below...?